Luckily, the Belle Harbor parish has been able to host another Summer Classic without a hitch — providing a huge morale boost to the Rockaway community. It truly wouldn’t be summer in the Rockaways without the Summer Classic tournament.

The tradition continued thanks to tournament director Keith Goldberg. Regular season games began the week of June 21 and wrapped up with playoffs and championships on Aug. 20. Age groups this year ranged from the co-ed second-grade division all the way up to the men’s and women’s open divisions.

Last summer, the tournament began more than a month later than expected, since Goldberg and staff needed full approval from the New York City Department of Health and Mental Hygiene to host the event. Thankfully, with COVID-19 numbers on the decline at least at the beginning of the summer, approval from the city was no longer needed.

This was the 37th year that Goldberg has successfully run the summer tournament. In total, 80 teams competed, which is slightly above a typical year.

“It’s just like riding a bike,” Goldberg said of the process to coordinate schedules, officials, volunteers, and first aid staff.

The biggest change from last summer to this was the ability to allow spectators into the St. Francis de Sales schoolyard to watch the games. Fans last year had to stay outside the fence, maintain at least 6 feet of distance from each other and wear face coverings. 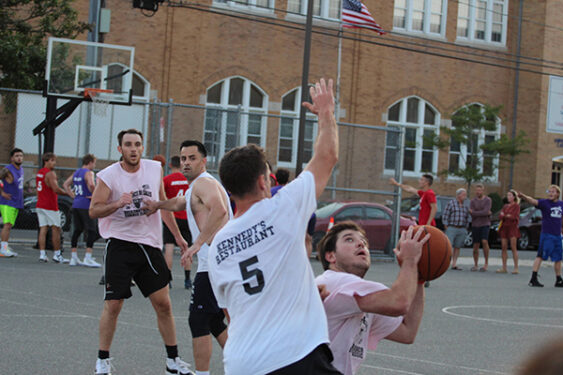 Teams also gained access to the parish’s indoor basketball court, which allowed for more games to be played. Each night, 15 games took place — three inside the gym and three each on the four outdoor courts. As Goldberg said, “It’s a lot of basketball.”

The Summer Classic is very intertwined with the community in the Rockaways. Being able to safely socialize this year was an added bonus to the beloved summer tradition.

“That was the element that we were able to return to this year…the feeling that this is a place where people can come and be together with each other while watching the games as a parish and community,” Goldberg said.

“Last year was great for the kids to at least have the opportunity to play, but this year, it wasn’t only the kids that benefitted. It’s the entire community that benefitted from a return to normal operations. That’s what’s brought back the true feeling of what the Summer Classic brings to the Rockaways.”

Safety was, of course, still a top priority. Coaches remained in constant contact with their players and families to make sure no one had symptoms or had been exposed to the virus before showing up for a game.

Once again, the St. Francis de Sales Summer Basketball Classic didn’t miss a beat, despite the ongoing pandemic. Here’s to hoping that next summer’s tournament will take place in a COVID-free NYC.