The name “George Shuba” likely rings a bell for many Brooklyn Dodgers’ fans. Back in the glory days of baseball at Ebbets Field, Shuba and “Dem Bums” captivated the borough of Kings.

These days, “Shotgun” Shuba, now 87, can still recall the memories of his baseball career. Through it all, he’s relied on his Catholic faith, which played a role in one of baseball’s most memorable interracial moments at a time when racial equality was far from the norm.

Shuba, the youngest of 10 children, grew up in Youngstown, Ohio, in a family of Czechoslovakian descent. He developed a love for baseball at six years old. Instead of playing in an organized little league, he and the neighbor kids played ball right in the street.

He attended Catholic grammar school at Holy Name Elementary in Youngstown. He recalls the nuns being very strict, which helped him become disciplined at a young age. His brother was a priest, so he was constantly surrounded by Catholic influences.

Before every meal, Shuba and his family would recite a Slovak prayer — a tradition started by his mother and brother. He continued to say this prayer each day during his baseball career and still carries on the tradition to this day.

In the mid-1940s when young men were being shipped around the globe during World War II, Shuba was dealt a different hand. He sustained an ear injury while being disciplined by one of his teachers as a child, so he was unable to enter the U.S. Army. Instead, Shuba attended an open Dodgers’ tryout in 1943 at age 17, after finding out about it from his friends on the street.

“They said, ‘George, you should go try out at Borts Field (Youngstown). You’re good enough.’” Shuba said. “I really didn’t think I was, but I went and hit a few out of bounds and a couple of fouls out of the park.”

Though Shuba signed with the Dodgers following his tryout, his father, Jan, was not on board with the decision to pursue a lofty career path. Jan worked at the mills in Youngstown, a steel-manufacturing town.

“He (Jan) wanted me to work at the mills where I could have a steady job,” Shuba said. “But I had dreams of being a professional ball player. I really believed I could.”

Shuba worked on his swing every night by hanging a rope from his ceiling and tying knots to represent the strike zone.

“I would swing a 44-ounce bat 500 times a night between the knots,” Shuba said. “When it came to batting practice the next day, I was already ready!”

Shuba gained a reputation for hitting hard line drives all over the field. According to Roger Kahn in his book, The Boys of Summer, the nickname “Shotgun” evolved from Shuba’s “spraying line drives with a swing so compact that it appeared as natural as a smile.”

After playing his first three minor league seasons with the New Orleans Pelicans, Olean Oilers and Mobile Bears, respectively, Shuba started the 1946 season with the Montreal Royals, one of the Dodgers’ major farm teams. It was on this team that Shuba’s Catholic faith led him to make a pivotal gesture that commenced the process of integrating the national pastime.

One of Shuba’s teammates was the legendary Jackie Robinson, known of course for breaking baseball’s color barrier in 1947. On April 18, 1946, the Royals took on the Jersey City Giants at Roosevelt Stadium, Jersey City, N.J.

In the top of the third inning, Shuba reached base safely in front of Robinson. Robinson followed with a mammoth home run, and as he was about to touch home plate, Shuba was waiting with his right hand extended.

“The moment I shook Jackie Robinson’s hand, I knew that this would be a big part of my baseball career,” Shuba said. “I played at Chaney High School (Youngstown) with black kids and already accepted them as teammates and friends. When it came to shaking Jackie’s hand, there was no question. He was on our side; he was on our team. My Catholic faith taught me to treat all people equal … bottom line.”

Shuba said that Robinson’s courage and determination were easy to spot while watching him play. “It was hard to believe he played so well under such tremendous pressure,” Shuba said. “He taught me to never give up!”

This mentality pushed “Shotgun,” as he spent parts of six seasons in the minor leagues. Even after hitting .389 for the Mobile Bears in 1948, he didn’t make his Brooklyn Dodgers debut until much later on that season.

Shuba served in a utility outfielder role and as a left-handed pinch hitter in his seven professional seasons in Brooklyn. He lived at Hotel Bossert, Brooklyn Heights, during the season and attended St. Charles Borromeo and Assumption of the Blessed Virgin Mary parishes, both Brooklyn Heights. It did take some time, however, for the midwestern native to adjust to Brooklyn life.

“When I made it to Brooklyn, I saw how fast-paced the people were…way different than Youngstown,” Shuba said. “People were always on the go!”

The hectic nature of Brooklyn living didn’t stop the locals from adoring their Dodgers. The team reached the World Series three times during “Shotgun’s” tenure. In 1953, Shuba became the first player in National League history to hit a pinch-hit home run in the World Series — a sixth-inning, two-run blast off New York Yankees’ hurler Allie Reynolds. 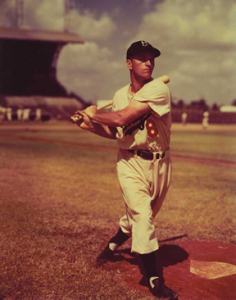 “My pinch hit in ’53 was very important to me,” Shuba said. “ When I hit the ball, I never knew I broke the record. I kept my bat for a long time.”

The Dodgers won the World Series in 1955, but by that time, Shuba’s career was winding down. He pinch-hit just once in that series, as nagging knee problems forced him to undergo surgery, which ended his playing career.

He then moved back to Youngstown, where he met his wife, Katherine, and raised his three children. He and his family would attend St. Christine Church every Sunday, and he would pray every night with his children as they went to bed.

Over the years, Shuba has taken pride in his baseball career, especially his groundbreaking handshake with Jackie Robinson. In 2007, his released his memoir, My Memories as a Brooklyn Dodger.

“Writing my book was wonderful, for I was able to relive my career and remember those days,” Shuba said. “I was very lucky to live out my boyhood dreams and become a professional ball player.”

Today, the octogenarian enjoys sitting comfortably in his living room, where the iconic handshake photo hangs above his favorite chair. He’ll go down in baseball lore as one of the pioneers of racial equality in what has now become an international sport.