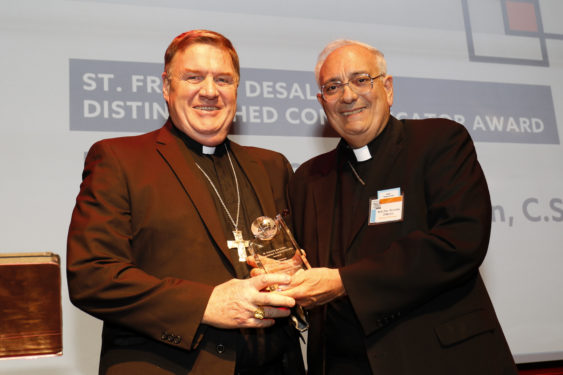 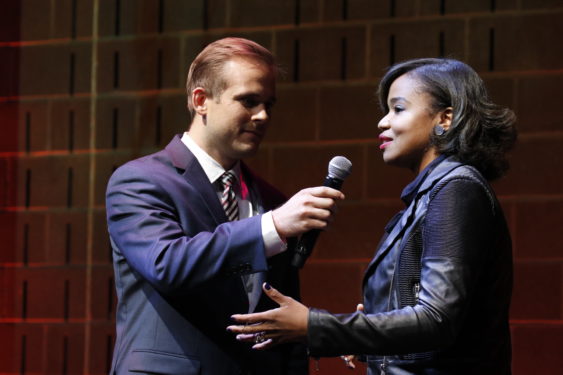 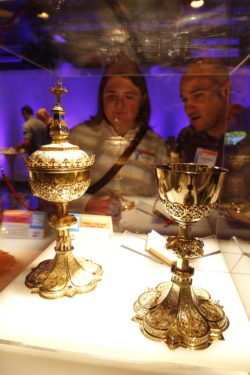 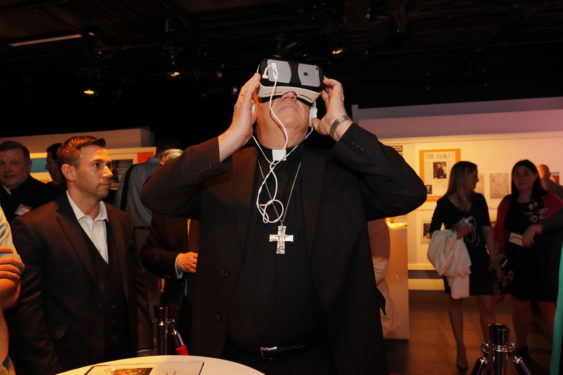 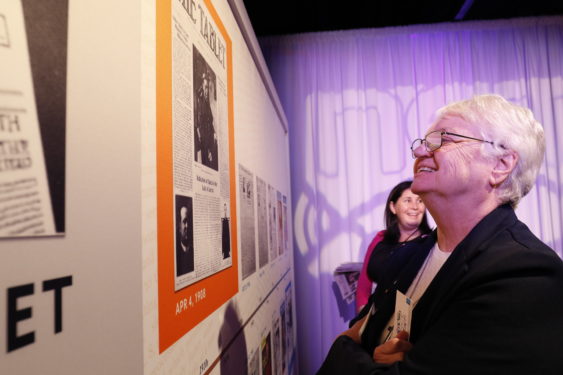 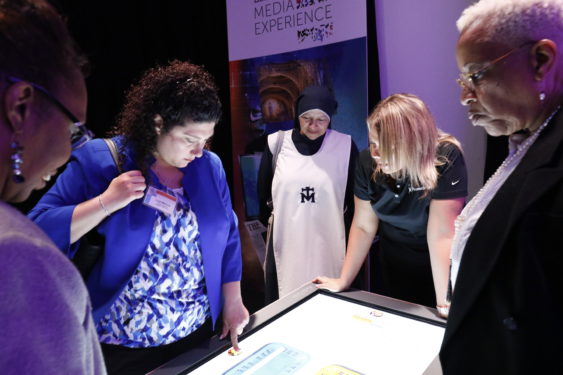 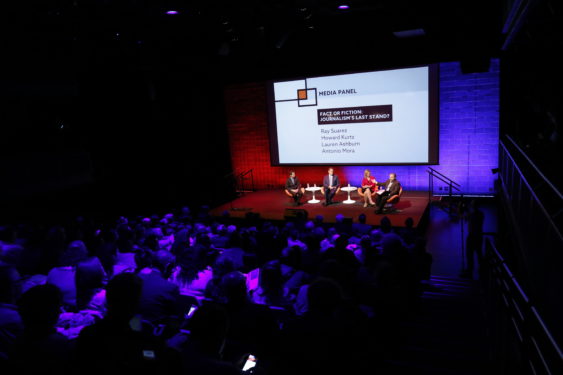 The Archbishop of Newark was the keynote speaker at DeSales Media’s celebration of World Communications Day in Brooklyn.

Held at BRIC House in the downtown area, the day-long conference brought together about 250 people involved in both the religious and secular media as well as interested parishioners.

To illustrate his point, Cardinal Tobin used a well-publicized incident when he accompanied a poor Mexican immigrant who was threatened with deportation to the federal courthouse in Newark. He prayed with members of other faiths alongside Catalino Guerrero, a 59-year-old grandfather who had never been charged with any crimes and who suffered from diabetes and heart disease.

“This act of accompaniment was simply a singular act of trying to make a difference in the face of vast hopelessness,” he said. “As Christians we have no alternative but to communicate hope and we do that when we put a face on those who have been frequently demonized into being something they are not.”

He said this “facelessness” of the poor and the downtrodden is “aided and abetted by political rhetoric and also by a complicit news media.”

The cardinal said he does want to make the media into a punching bag, but he added there were some glaring deficiencies in the news industry that demand attention.

The media “doesn’t always report the facts straight forwardly,” instead opting for the spectacular “if-it-bleeds-it-leads” approach.

He felt that the push to get good ratings in order to earn advertising revenues and the challenge of maintaining the 24-hour news cycle can compromise reality with the spectacular.

He felt that news coverage relies more on opinion and less on facts.

He said he once was out of the country for five years and when he returned, he wondered, “Where can I get the news?”

He also pointed to the “fear-based” coverage of events that causes hysteria and stirs controversy rather than simply reporting the facts.

To counteract the “facelessness” of the poor and forgotten, Christians, he said, are called to communicate the Gospel of Jesus by simple acts of compassion.

“Accompanying Catalino Guerrero was simply an act of compassion on my part,” he said. “But to many it was a symbol that communicated hope and a sign that the Church does not live in some ivory tower.

“Standing beside and praying with Catalino Guerrero and his family, speaking to the media about it, were actions taken together that provided a lens through which other might see this event,” he said.

The program also featured a panel discussion on “Fact or Fiction: Journalism’s Last Stand?” and an exclusive screening of “Sacred” a new faith-based documentary with a presentation by a question and answer period with the filmmakers.

Suarez, a Brooklyn native formerly of Al Jazeera America and PBS NewsHour, moderated the talk, which discussed the current state of the news business in America at a time “when the very idea that there is such a thing as truth, is fragile, under assault and open to question,” he said.

Panelists spoke about the credibility crisis in news reporting today, and the overall polarization of society, particularly in the Trump era. They discussed the lack of news outlets offering fair and balanced journalism amid the prevalence of fake news, media biases and blurred lines between reporting facts and opinions.

“And then mistakes and a reluctance to own up to those mistakes are among the reasons why every poll has very distressing news for those who care about journalism, about the state of public trust in our business,” said Kurtz, host of Fox News Channel’s MediaBuzz.

Citing a 2016 Gallup poll, Suarez noted that the American public’s confidence in mass media has dropped significantly over the last 40 years.

“I think it’s the media’s responsibility to earn that trust back,” said Ashburn, managing editor and anchor for EWTN News Nightly.

Trust is not earned when news outlets or individual reporters are striving to stand out as the loudest or most outrageous in the business. Rather, gaining public trust hinges on factual reporting and the fair presentation of both sides of an issue.

That becomes harder when there are fewer personnel at news outlets these days, and increased pressure on reporters to produce more at a faster pace with less oversight, thereby leading to errors in the hyper-speed of the 24-hour news cycle.

Looking at the big picture, he noted that the changes in the news business have been informed by what the American public wants. “You guys are part of the problem too,” he said, speaking into the crowd of Catholic communicators.

While people may say they want serious news, he said that audience research shows otherwise with public interest leaning more toward “blood and guts,” than current affairs, investigative reporting and international news.

Another concern is the use of social media and the digitization of media channels and platforms, which have given everybody a way to voice their opinions.

While that can be a healthy thing, Kurtz said, “the dark underside of that is that consumers have to make their own choices about what is credible.”

Journalists encouraged those present to actively seek out different forms of communications and news sources beyond what is easy and most accessible.

“I challenge the audience to find new ways of understanding and interpreting the news. And they’re out there,” Ashburn said.

She also tasked those in the news business with being more responsible in terms of presenting more serious news stories, getting the facts right and “making more of a clear distinction between what is opinion and what is news.”

Shot by more then 40 filmmaking teams around the world, “Sacred” brings the audience into the daily use of faith and different practices from all corners of the world. The film focuses on how people turn to the rituals and prayers of their cultures to both celebrate and mourn the highs and lows of their lives.

Director Thomas Lennon was able to put together the film without ever leaving his office. He directed the work of film crews from over 25 countries.

Stories varied from people struggling with their faith to people having their faith define them. The film showed prisoners-turned-ministers of a Louisiana prison trying to share Jesus’ message.

In other sequences, families in Madagascar celebrated Famadihana when they dig up the bodies of their loved ones and rewrapped them in fresh cloth; scenes of Hindu Spring Festival and Holy Week activities in Spain; young boys training to become monks in Tibet and families leaving the faith due to death of loved ones either by violence in war-torn countries or the Ebola virus in Africa.

Lennon discussed the film afterwards. “Faith has been so much in the headlines lately and mainly in a negative way, he said. “So we were looking to show the warmth of religion and the global reach it has.

“We hired people who knew the culture, language, religion, and traditions. They were able to show the real nature of the moment instead of having us come in and being clumsy by not knowing the exact nature of the experiences. We would have been outsiders.

“My job was then to turn all these amazing stories into one film. We didn’t use geography in the music. For the story of the boy from Pakistan there was western music. The music is used to unite all the different scenes to create one story and not have them all be just fragments.

“The process of the film made me a better person in ways. Having to engage and think about certain issues and seeing what many people who are different yet going through similar experiences made me think of my own faith and grow with it.”

Other panelists were Dr. William F. Baker, and Julie Anderson, executive director of documentaries for WNET-Ch. 13.