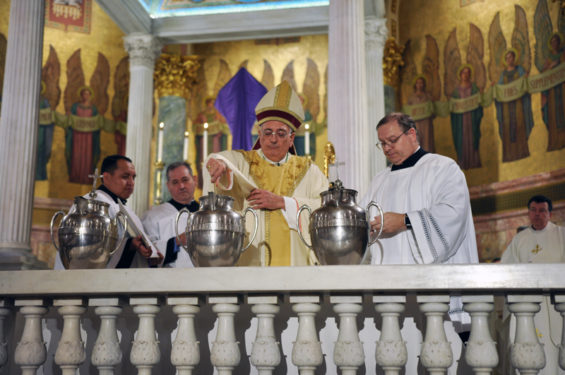 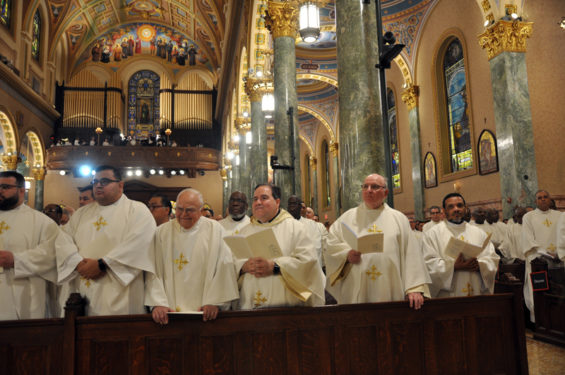 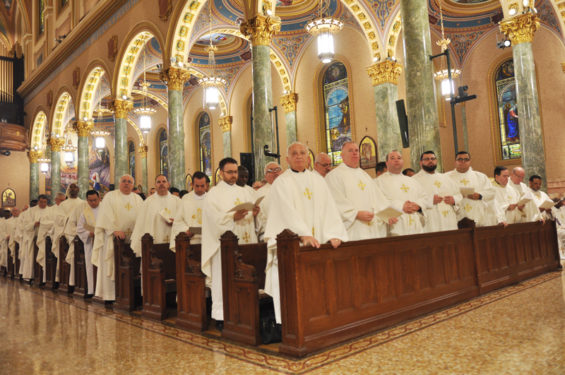 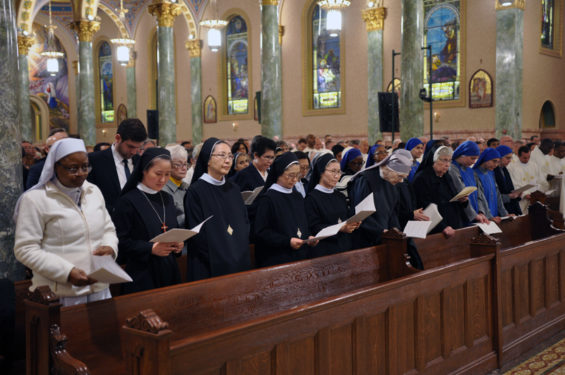 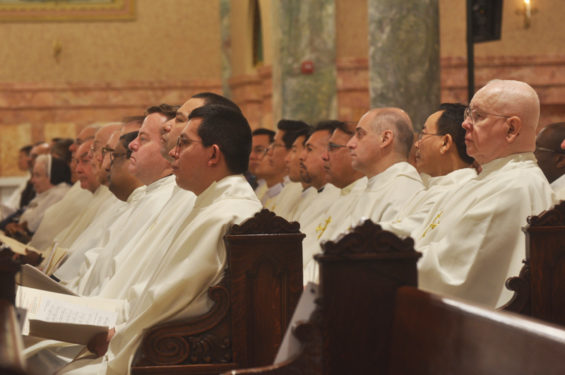 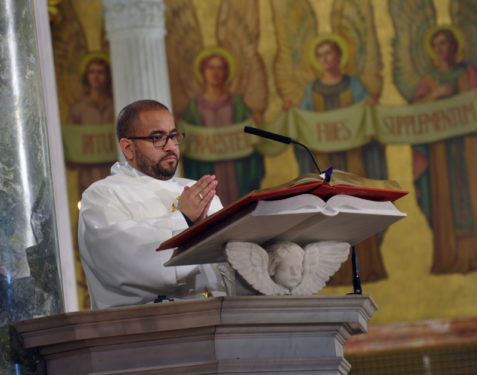 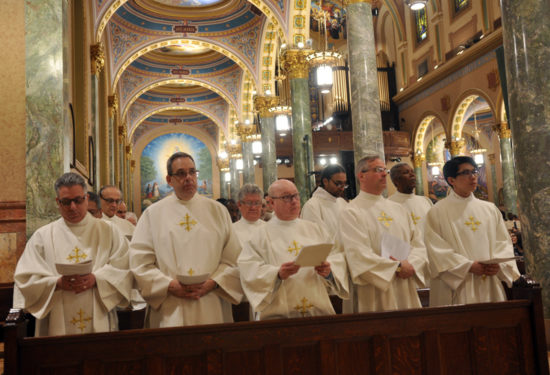 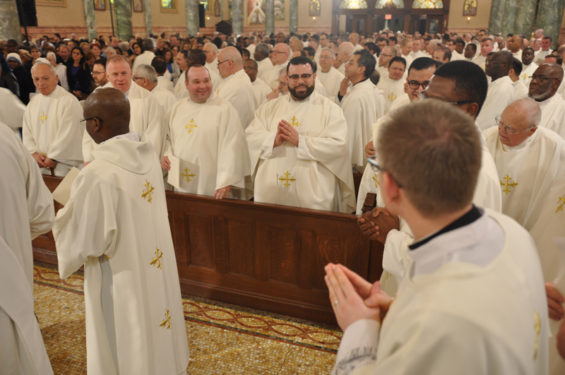 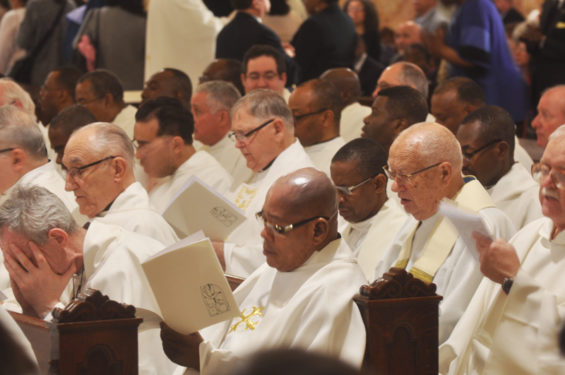 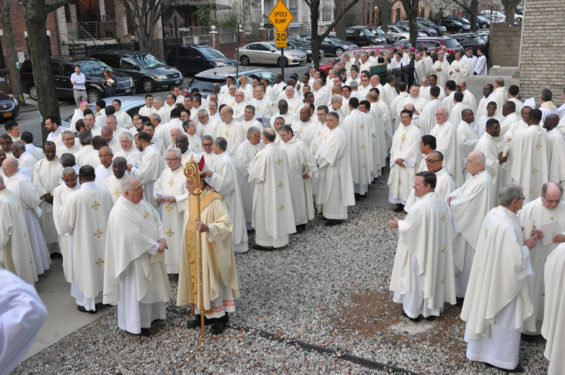 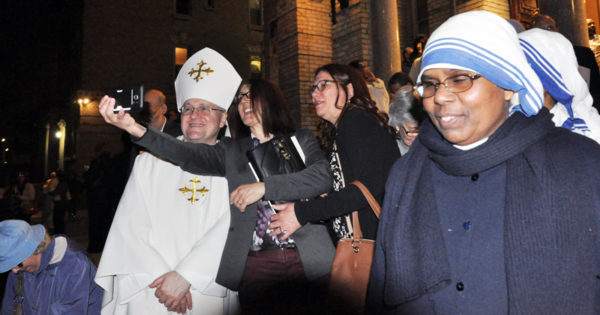 This is the complete text of Bishop DiMarzio’s homily at the Chrism Mass celebrated April 11 at St. Joseph’s Co-Cathedral in Prospect Heights.

During one of my Catholic Schools Week visits, a young student asked me, “Bishop, do you give the priests “pep talks?” Well, consider tonight your “pep talk!”

It was during one of my school visits that a third grader asked the question, “What does God look like?” I was surprised by his question and answered, with the Holy Spirit’s assistance, “God is love, when you see love or express love, you see God.”

A priest friend of mine was working with mentally challenged people and went door-to-door in his parish seeking out children for special catechism classes. He rang the bell at one home and the door was answered by a young boy with Down Syndrome. When he saw the priest, the boy called to his mother and shouted, “God is here!”

St. John Vianney once gave a most telling definition of the priesthood. “Priesthood is nothing but the love of the heart of Jesus.” In one of the office of readings during Lent, we recently heard, “No one has ever seen God. It is the ‘only Son’ who is closest to the Father’s heart who has made Him known to us.”

Our Holy Father, Pope Francis, speaks to us regarding the joy of the Gospel; the love and mercy of God. In preparing for tonight’s homily, I reviewed the Pope’s Chrism Mass homilies from his first up to last year and found that his constant theme is one of anointing taken from the Gospel reading of tonight, “Jesus anointing with the Spirit.” The priest is the anointer, like Christ to bring joy to God’s people. We are here tonight – priests, deacons, religious and God’s people of Brooklyn and Queens – because we are responsible for anointing God’s people in some way – the poor, the prisoner, the oppressed.

In his first Chrism Mass homily, Pope Francis said: “A good priest can be recognized by the way his people are anointed.” The people hear the Gospel preached with unction as people say; “Pray for me, bless me, anoint me.” The Pope tells us, “A priest who seldom goes out of himself, … anoints little.” He goes on to say, “I ask you: be shepherds, with the ‘odor of the sheep,’ make it real, as shepherds among your flock, fishers of men.” The Holy Father continues by saying, “…the only thing that counts is “unction” – not function”

In his second Chrism Mass homily, Pope Francis speaks of being anointed with the oil of gladness; Chrism – the joy of the Gospel, by saying, “Priestly joy is a priceless treasure, not only for the priest himself but for the entire faithful people of God.” Yes, there is a joy that anoints us, with an imperishable joy, a missionary joy, a joy which is sister to poverty, a sister to fidelity and obedience.

In his third Chrism Mass homily, the Holy Father speaks of “The Tiredness of Priests.” Francis says, “Our weariness, dear priests, is like incense which silently rises up to heaven. Our weariness goes straight to the heart of the Father.”

Last year, I joyfully celebrated my 20th Anniversary of Episcopal Ordination with a Mass at the Immaculate Conception Center, Douglaston, surrounded by my brother bishops, priests, deacons, religious and lay faithful of our Diocese. In my homily, I challenged each of us for a renewed commitment in vocation recruitment by doubling our efforts in identifying and recruiting young men and women to the priesthood and religious life. Throughout my Episcopal ministry in service to the Church of Brooklyn and Queens, I have made the vocation apostolate a top priority. This evening, I pledge to continue to keep this at the forefront of our unified mission.

This evening, I wish to officially declare a special “Year of Vocations” beginning on Aug. 4, the Feast of St. John Vianney, patron of priests. The theme of the year will be: “Reawakening the Call.” The goal of the year is to inspire our young people, who are flooding our streets, communities, schools, parishes, youth groups, by “Reawaking the Call” within them. And so, by extension “Reawaking the Call” in all of us who are living out our vocations; so that we may create a healthier environment for vocations to be considered, encouraged, nourished and responded. I encourage everyone to enter into this “Year of Vocations” with a commitment of an interior renewal for a stronger and more effective witness to the Gospel in Brooklyn and Queens.

Pope Francis, in his third Chrism Mass homily, said: “The one who anoints God’s faithful with oil, is also himself anointed by the Lord. He gives you a garland instead of ashes, the oil of gladness instead of mourning, the mangle of praise instead of a faint spirit.” (Is 61:3).

When I hear these words, my thoughts go to Bishop Chappetto whose tireless efforts daily are focused on the well being of the priests of Brooklyn and Queens. I also think of Msgr. Gus Bennett, who worked to the very end of his long life with such joy. And my thoughts are of Msgr. John Brown who labored so long and with great care for the good of the priests Brooklyn and Queens.

The Holy Father then describes the work of the priest, “…to bring good news to the poor, to proclaim freedom to prisoners and healing to the blind, to offer liberation to the downtrodden and to announce the year of the Lord’s favor. Isaiah also mentions consoling the broken-hearted and comforting the afflicted.”

I think now of our undocumented immigrants. There are a half million undocumented people here among us in the City of New York, most living in our diocese here in Brooklyn and Queens. Our priests, deacons, religious and people are the ones who console them, especially those whose legal status cannot be resolved. My thoughts go to Msgr. Jim Kelly, in retirement yet still working for the good of so many. As well, I think of Father Bob Vitaglione and Father John Garkowski for their tireless work with the undocumented, and the work of the Redemptorists at the Basilica of Our Lady of Perpetual Help and other parish programs. And the staff of the Office at our own Catholic Migration Office, inspired by Msgr. Ron Marino and currently under the leadership of Father Patrick Keating, who assist so many people on a day-to-day basis. We have so many parishes with large undocumented population who need assistance, parishes under the direction of Father Ray Roden, Father Rick Beuther, Father John Vesey and so many more pastors and administrators who are faced with the many issues the undocumented deal with daily.

All are tired, but await the Lord’s consolation, who imitate the Lord Himself as He washed the Apostles’ feet by cleaning them at the Last Supper.

We priests need the Sacrament of Reconciliation, if we are to be good confessors. On March 2 of this year, Pope Francis gave a “Day of Recollection” talk to the priests of Rome where he said, “One thing is clear: ‘Temptation is always present in the life of Simon Peter and temptation is always present in our lives. Moreover, without temptation, you cannot progress in faith. In the Our Father, we ask for the grace not to fall; (but we do “not” ask) to not be tempted,’…” departing from his prepared speech. The meeting, held at the Basilica of St. John Lateran, was delayed for roughly 45 minutes as Pope Francis heard the confessions of a dozen priests.

I, too, as a Bishop, know the failings of my priests. I do not, however, have the opportunity as Pope Francis did to give sacramental absolution, to anoint with the oil of gladness. Tonight, we accomplish that sacramental sign in the Eucharist. We all need prayer. We all must be faithful in taking our yearly retreat. We all need the Jesus who anointed us in Baptism, Confirmation and Holy Orders, to continue the act of anointing us with the Oil of Gladness.

And, finally, the Holy Father in his message given at the Chrism Mass last year, spoke of priests being “Ministers of Mercy” during the Year of Mercy. Pope Francis tells us, “As priests, we identify with people who are excluded, people the Lord saves.”

We, too, need God’s merciful forgiveness in order to give us joy, to show the face of God’s love to His people. Each of us has been anointed by the Holy Spirit, and each of us has been called to be dispensers of the Father’s mercy after the example of Jesus, His Son. All that we receive from so generous a God, we freely give.

Tonight, united as the priests, deacons, religious and lay faithful of Brooklyn and Queens, we now bless the oils that will be used as the sacramental sign of healing and of empowerment for service to Christ and His people. May these sacred oils give comfort to the sick; the grace of perseverance to our catechumens; an abundance of the Spirit’s sevenfold gifts to our confirmandi; and the grace to be effective instruments of God’s truth and charity to our newly ordained priests. May the fragrance of the Chrism Oil truly rise up to the glory of the Blessed Trinity; Father, Son and Holy Spirit, who lives eternally in love, now and forever.