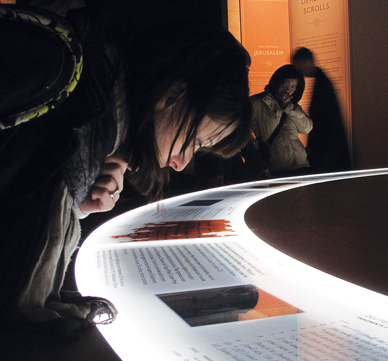 The oldest known written version of the Ten Commandments is now on display for the first time in New York City at Discovery Times Square, until Jan. 2.

The exhibit is part of a larger display of the Dead Sea Scrolls, which will be at the museum until April 15. The 2,000-year-old scrolls include many parts of the oldest known versions of the Hebrew Bible. The exhibition also includes common objects from that time period such as pots, coins, and weapons.

Upon entering the museum visitors will be greeted by a host, whose job it is to mentally transport them to Israel. He/she will tell them of the Bedouin goat-herders who in 1947 threw a rock into a remote cave in the Judean Desert in Israel and heard something inside shatter.

The next day they returned to the cave and discovered parchments and clay jars. Looking to make some money, they worked with Khalil Iskander Shahin, an Armenian shoemaker who also had an interest in antiquities. He did not know whether these scrolls had any value, but promised the Bedouins two-thirds of the profits.  The shoemaker had trouble selling the scrolls because buyers suspected them of either being fake or stolen from a local synagogue.

The scrolls eventually found their way to the authorities and were determined to be ancient religious writing. Over the next couple of years, 900 manuscripts were found in the caves of the Judean Desert.

The scrolls had survived insects and the elements for 2,000 years. When they were dug up, they were given to historians who did not have much experience in archeology.  They used tape to put them together, smoked while working, and left the pages in direct sunlight.

Dr. Risa Levitt Kohn, co-curator of the exhibit, said she does not blame the original historians for their lack of care. They were given a daunting task and completed it in the way they thought best.

“It was like getting thousands of pieces for hundreds of puzzles and no box to tell you how to put it together,” she said.

Since that time, the Israel Antiquities Authority has taken great measures to make sure the scrolls are able to be appreciated by generations to come. Part of its work has been to share this amazing discovery by allowing the findings to be shown in different parts of the world.

Among those who were able to view the scrolls at Discovery Times Square was Dr. Robert Cavin, from the Millington Baptist Church, N.J. Part of his doctoral thesis focused on the Dead Sea Scrolls. He said what is truly amazing about the scrolls is that they show the continuity of the ancient texts.

The second oldest full text of the Ten Commandments appears on The Leningrad Codex, which is 1,000 years younger and which has been the basis for most religious texts.  The Dr. Cavin said there is virtually no difference in the contents of the texts.

He said this was made possible by the extreme dedication of the religious people who wrote the texts and is simple to see the care they put into their work.

Dr. Levitt Kohn said part of the purpose of the exhibition is to transport people into the past to try to show the way people lived around the time when the scrolls were written. The exhibit displays objects that surround the every day lives of the people who cared for the scrolls.

One of the museum plaques reads: “Remnants from a time when everything sacred was written, and everything written was sacred.”

Among those who took a trip to the past was Forest Hills resident Moshe Aranon, who came with his son to connect him closer to their Jewish religion.

“It’s a link back to the past,” he said. “It is the foundation of our religion.”

Father Kazimierz A. Kowalski, pastor of Our Lady of Good Counsel parish, Manhattan, said he is amazed at being able to come in contact with scrolls documenting the Psalms and excerpts of the Bible.

“It’s a privilege to see them in person,” he said. “It’s an opportunity to connect to your history.”

Dr. Levitt Kohn said the exhibit seeks to attract as wide array of people as possible ranging in age, religion and culture.

“The Dead Sea Scrolls are a blockbuster hit wherever they go,” she said. “There is enough information for everyone to walk away with something they didn’t know before.”