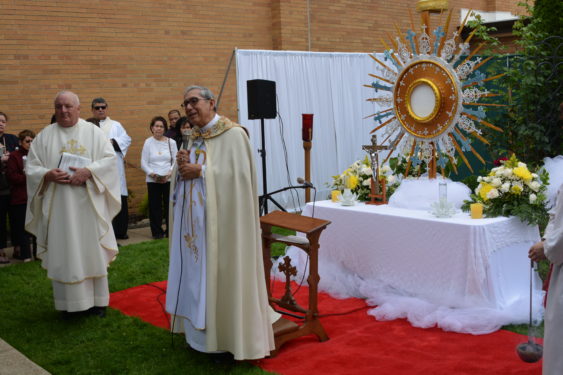 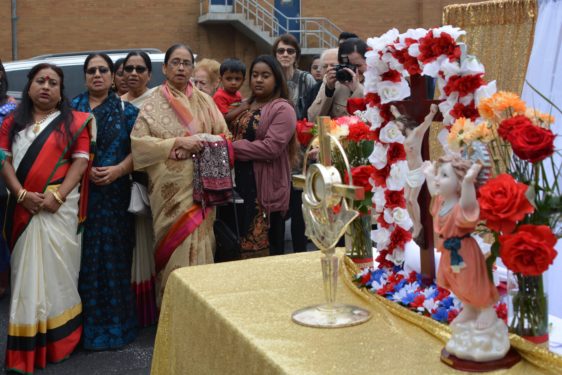 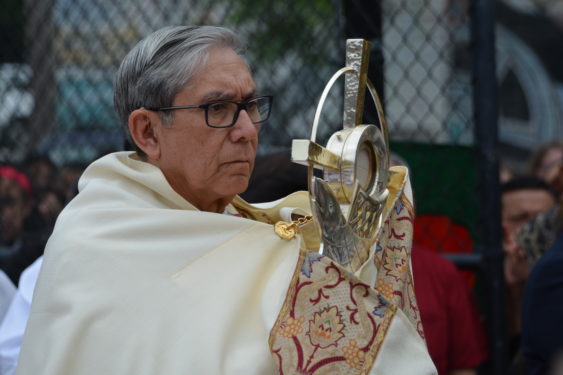 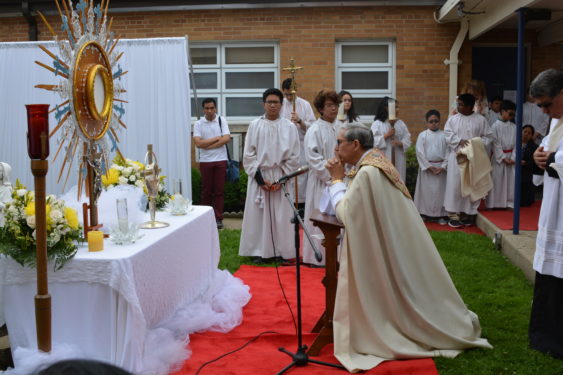 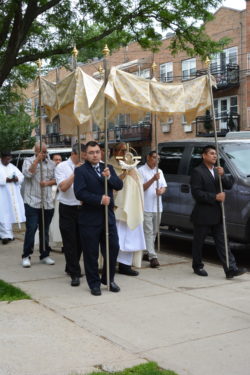 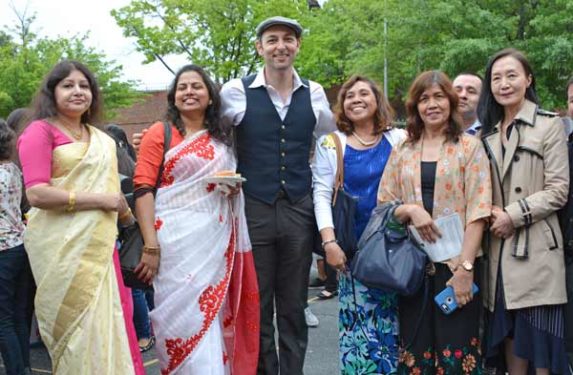 “We believe in the real presence of our Lord Jesus Christ. Jesus, who lived, who died, who rose, is alive, is real, and is present in our midst. That is what we celebrate today,” said Bishop Octavio Cisneros at the beginning of his homily Sunday, June 3, at Corpus Christi Church in Woodside.

He was the main celebrant of the feast of Corpus Christi Mass and he started his homily defining the essence of the celebration: the real presence of Jesus Christ in the Sacrament of the Eucharist. It is one of the fundamental and distinctive tenets of the Catholic faith.

More than 600 people participated in the Mass, celebrated in the parish school gym to accommodate the parish faithful in one single Mass. The liturgy was celebrated in English and Spanish, with some hymns and prayers in Tagalog and Bengali, to reflect the four main language groups in this multicultural community.

In front of the temporal altar, a banner read: “Many Peoples, One Faith – Corpus Christi.” The celebration was a living proof of that statement. The choir sang songs in four different languages with different leading voices, and musical instruments from different cultural traditions, but the organist and choir director Matthew LaBanca and the core musicians played every hymn, regardless of the language.

“I think it was really incredible to embody the spirit of Corpus Christi – one faith, one family, one body in God,” said LaBanca after the Mass. “People tell me, ‘How nice that you brought so many people together in one universal musical way.’ Yes, it was great!”

“We sang a traditional Bengali hymn that says ‘We love God and God loves us,’” said Chanbra Corraya, a member of the Bengali choir.

That was also the central concept of the homily by Bishop Cisneros.

“There are three theological virtues: faith, hope and love. God is love,” the bishop said. “To love means to give yourself totally to the person you love. Otherwise, it cannot be called love. And that’s exactly what Jesus has done with us – He has made us one with Him by the gift of the Eucharist.”

After the Mass, the bishop led the procession around the parish grounds carrying the Blessed Sacrament in a monstrance, under an embroidered canopy.

A different language group had been in charge of preparing each of the four altars in the procession route.

At the first one, the faithful stopped to pray and sing in Bengali; in English at the second; then in Spanish at the third altar and finally in Tagalog at the last one.

“Our parish is the only one in the diocese named for the solemnity of Corpus Christi,” said the pastor, Father Patrick West. “Everybody helped with the preparations.”

As the faithful made their way to the second altar, the procession passed by Jose Sibri, an Ecuadoran immigrant selling homemade ice cream near the parish. He stopped working and clasped his hands in prayer while the bishop passed with the monstrance.

“We should pray to Jesus Christ and ask Him to protect us,” Sibri said. “We are Catholic. We believe in God. I put my faith on Our Lord.”

After the procession, they all went to the parking lot to share refreshments and treats from different countries and cultures.

Pilar Santos, a member of the Filipino choir, said: “We are here to celebrate the Feast of Corpus Christi. This is very important for us. We are a profoundly Catholic community. About 95 percent of Filipinos are Catholic, so this feast is truly important for our lives.”

It was an occasion for people from many different cultural backgrounds and countries of origin to celebrate their common Catholic faith. But it was also an opportunity to reflect on the mystery of faith, as the priest says in each Mass and the end of the consecration: the real presence of Jesus Christ in the Eucharist.

“The sacrifice of Christ is a sacrifice of love. And love and sacrifice always come together. You cannot have one without the other,” Bishop Cisneros said.

“To love means to give up yourself. To love at times means to be broken. That’s why it is so important at Mass when the priest takes the Host and he breaks it. Jesus took bread and broke it. And He broke Himself, He broke Himself on the Cross!”