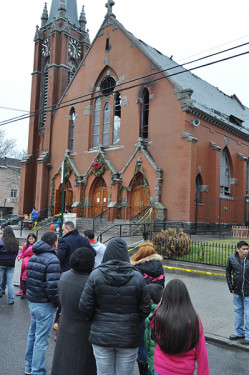 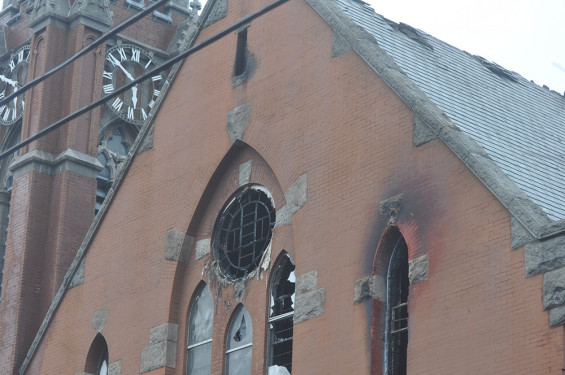 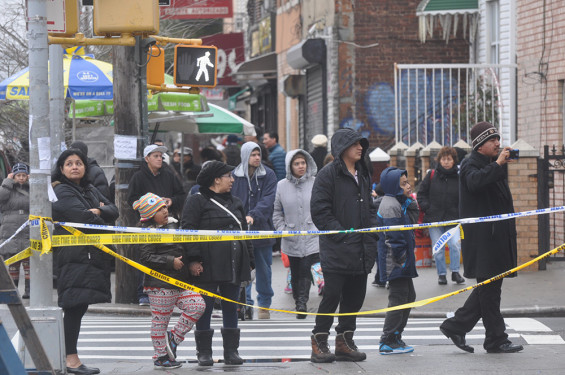 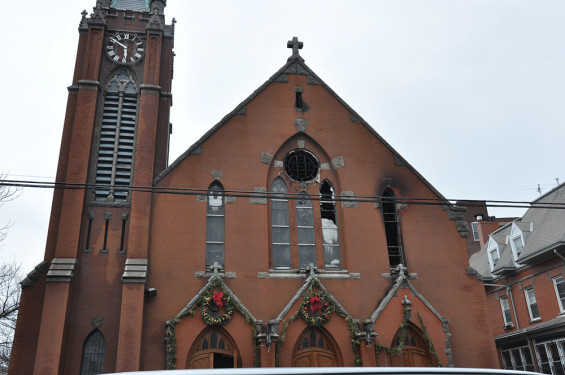 All through the day, the people of Corona kept coming to look at what had happened to their parish church, Our Lady of Sorrows. The parishioners, who are mostly Hispanic immigrants, turn out in large numbers for Sunday Mass there. On any given Sunday, there are 12,000 to 13,000 worshippers there. But when they came on the Feast of the Epiphany, they discovered that their church had been devastated by an early morning fire that cancelled all Masses. They stood in the street and stared upwards in disbelief.

The fire apparently started in the choir loft at about 5:45 a.m. and is suspected of being electrical in nature. It took more than 100 firemen two hours to extinguish the flames that lit up the early morning darkness. The hands on the clock in the steeple were eerily stopped at 10 minutes before six.

The flames blew through the attic space between the ceiling and the roof, causing extensive damage in those areas, before the firefighters were able to stop it.

Visitors were met by yellow police tape that cordoned off the area. A sign on the church door read: “Vacate, Do Not Enter.” On the rectory door hung the notice: “No Hay Misas Hasta Nuevo Aviso,” “No Masses Until Further Notice.”

At about 3 p.m., a large truck from Total Restoration Inc. appeared and workers carried in mops and brooms and large vacuums to attack the significant water damage. Through the fence leading to the side alley, volunteers could be seen carrying vestments and a large brass crucifix out of the church and into the rectory. All the while, the looks on the faces of the men, women and young people standing along 37th Ave. were of disbelief and horror.

Even the pastor, Msgr. Thomas Healey, who has been at he parish for 24 years and is set to retire later this month, says, “Right now I’m still in shock. To tell you the truth, I’m kind of out of it.”

Our Lady of Sorrows is one of the liveliest parishes in the diocese. The Diocese says that it is fully committed to helping the church rebuild so that it may continue to serve its faithful worship- ping community that dates back to 1872.

The vibrant parish also has played host to sevral immigrant-related events in the past two years, including a September, 2013 Mass celebrated by Bishop Nicholas DiMarzio; a 2014 press conference for Catholic Migration Services with Sen. Charles Schumer and Congreswoman Grace Meng, and a November, 2014 bills-signing ceremony with Mayor Bill de Blasio for measures that protected undocumented immigrants.

“This parish is an immigrant parish. And the people that come here, they’re poor and many of them don’t have the security of proper documents,” explained Msgr. Healey. “So they come here, and this is where they get strength. They feel accepted, they feel at home. “

The parish offers 12 Masses on Saturday night and Sunday and nine Masses are in Spanish. Three are in English but most of the people at the English Masses are Spanish because they want to get a seat, says Msgr. Healey.

The pastor says that the parish may use the school auditorium for Mass. Some parishioners are also talking about erecting a tent in the parking area for liturgies.

“The response of the people has been wonderful,” says the pastor. “In some ways, from something like this, a terrible tragedy, it’s going to bring us together to work hard to bring us back to where we should be.”