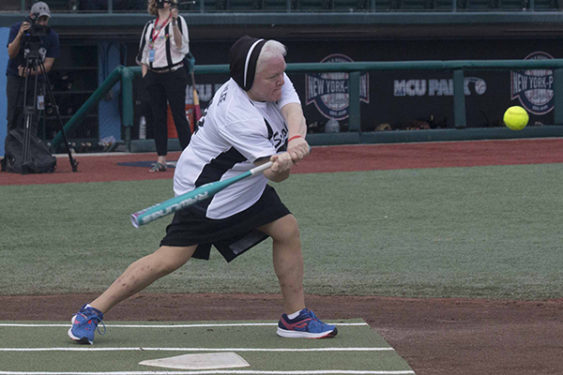 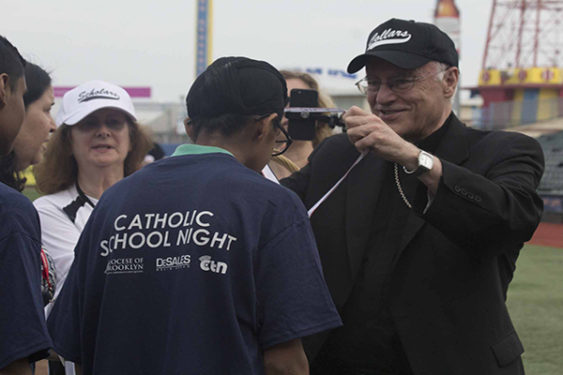 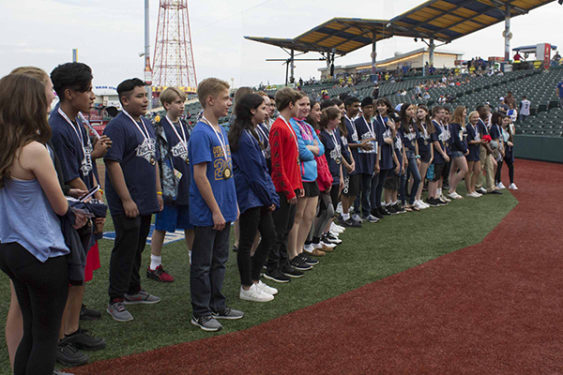 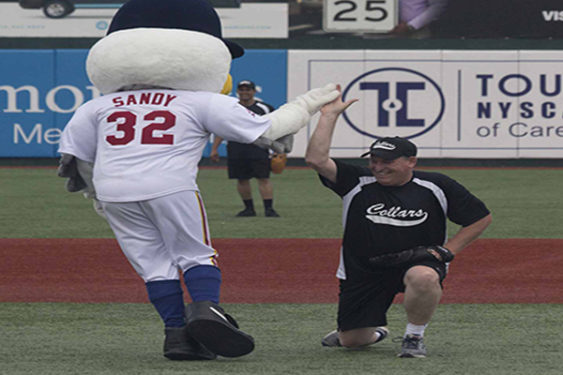 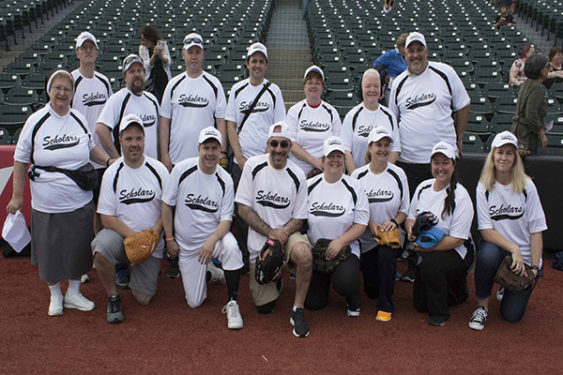 For the second straight year, the Brooklyn clergy showed their prowess on the softball diamond with a 2-1 win over principals and teachers of diocesan schools.

The annual Collars vs. Scholars game sponsored by DeSales Media, parent group of The Tablet, was part of the Catholic Schools Night celebration June 17 at MCU Park, Coney Island, played prior to the Brooklyn Cyclones–Aberdeen Ironbirds baseball game.

The Scholars struck first when John O’Brien, principal of Good Shepherd Catholic Academy, Marine Park, drove the ball past the left fielder and ran all around the bases.

But in the third inning, the clergy hitters came alive.  When some of the veteran priests could not attend, the Collars boosted their line-up with seminarians and younger priests who proved to be the difference.

Father Chris Heanue, administrator of Holy Child Jesus, Richmond Hill, led off the frame with a base hit.  Newly ordained Father Edwin Ortiz, parochial vicar of St. Athanasius, Bensonhurst, added a one-out single.  But then major seminarian Elvin Torres slashed a double, just fair down the left field, and Paola Salazar, a college seminarian, added another hit and the Collars had all the runs they would need.

The Scholars posed a major threat in the fourth inning.  Christopher Scharbach, principal of St. Francis de Sales Catholic Academy, Belle Harbor, was on first base and O’Brien was posed to hit when MCU officials declared that time was up and the victory went to the priests and seminarians.

It was the second consecutive win for the Collars who were victorious a year ago when then-seminarian Jose Diaz clobbered a walk-off home run.

The evening featured a Sister Shirlee Tremont, M.P.F, bobble-head giveaway to honor last year’s MVP.  In her only plate appearance this year, Sister Shirlee fouled out, although she made several stellar plays on defense at second base.

“Once again the Collars walked away with the victory. It is a great opportunity to celebrate Catholic education, honor our students and have a nice evening,” said Father Christopher Bethge, parochial vicar at Incarnation, Queens Village.

“It was a great experience to play with fellow colleagues on the field where the Brooklyn Cyclones play.  Everything about the night, was top-notch, and even though we were robbed of our last at-bat, and evitable tying and winning run of the game, we look forward to a re-match and subsequent victory in next year’s game,” said Tom Morris, principal of St. Adalbert’s Catholic Academy, Elmhurst.

“The Scholars vs. Collars softball game was a wonderful way to help bring the school year to an end,” said John O’Brien, principal of Good Shepherd Catholic Academy, Marine Park. “The game was a lot of fun and was filled with good spirit. It was great to play alongside my colleagues and against the collars, many of them my friends and former students. They should count themselves lucky, though — one more pitch and things would have ended differently! Looking forward to a rematch next year!”

“The game was a lot of fun and it was wonderful to be able to honor the students in front of a large audience so they could get the recognition that they deserve for their hard work all year,” said Russell Berry, principal of Holy Angels Catholic Academy, Bay Ridge.

Those sentiments were echoed by Father Jason Espinal, parochial vicar at Our Lady of Angels, Bay Ridge, who said, “What a better way to celebrate Catholic education than by awarding the achievements of our graduates and gathering around the ole American past time. We know that Catholic education is about the formation of the whole individual. This game was proof of it. We celebrate hard work and learning.

“We come together as a people of a common faith, and we can have fun with wholesome competition. It was great being on the field again, even better because we won (even though it was a close call). Three cheers to our students, our teachers, our consecrated religious, and our priests!”

Regardless of the outcome, everyone seemed to enjoy the evening, like Craig Mercado, principal of St. Ephrem’s Catholic Academy, Dyker Heights, who said, “I had a great time celebrating the valedictorians and salutatorians last night. It was a great experience to play in the Collars vs. Scholars game for the second year. It is always a pleasure to see current and past students in the stands cheering us on and to get a chance to reconnect with old faces. Can’t wait till next year.”

After the game, he admitted, “The Scholars played tough and gave the Collars a great challenge. It was a lot of fun and the rivalry between the two teams has a lot of energy. It was wonderful to have the crowd into the game. But most of all, it is all about our children in the Catholic school system of the Diocese of Brooklyn, for they are our future and our hope.”

“It was a privilege to play for the Scholars,” said Patricia Winters, principal of Holy Child Catholic Academy, Richmond Hill.  “There was such wonderful team spirit and great camaraderie. It was nice to see so many of our Catholic academies celebrating our valedictorians and salutatorians.

“We should do more events such as this to celebrate our Catholic school pride. It was great to see all the students from the academies across the diocese having fun and enjoying themselves together with their faculties.

“If I’m recruited next year, I’d be delighted to play again!”

“It is always a great joy to have the opportunity to play in the Collar vs. Scholars softball game because it is an evening to celebrate Catholic education,” added Father James Kuroly, the newly appointed president of Cathedral Prep and Seminary, Elmhurst.

“Nights like this is a reminder of the great collaboration being done by our principals and priest so that each student is given an opportunity to know Christ in and outside the classroom. The game shows that encounter with Christ can even happen on the ball field!”

Before the game, DeSales Media and the Office of Catholic Education honored valedictorians and salutatorians from elementary schools in Brooklyn and Queens.