Though it’s now baseball season, football is quickly becoming America’s new pastime. We are lucky here in N.Y.C. to have some of the state’s top high school programs right in our own backyard.

Formed in 1954, the CHSFL defies traditional diocesan boundaries, with the winner each year being a true downstate champion. The league originally started with eight members but has expanded to 20 teams across three divisions today.

The original eight members all belonged to the Catholic High School Athletic Association (CHSAA) but were overshadowed by the strong basketball and baseball programs at the time. Therefore, the CHSFL was formed independent of the CHSAA.

“The CHSFL is a totally separate entity, and that’s what makes it unique for our kids,” said Chris Hardardt, president of the CHSFL and athletic director at Holy Trinity Diocesan H.S., Hicksville, L.I.

Hardardt has been the league’s president since 2005. After graduating St. Joseph’s College’s Brooklyn campus, Clinton Hill, in 1989, he returned to his alma mater Christ the King R.H.S., Middle Village, in 1990 to become the head football coach. He moved on to Holy Trinity as the athletic director in 1999 and also joined the CHSFL’s executive committee that same year.

The majority of the league’s head coaches played in the CHSFL – many at the current school in which they are coaching.  An even higher percentage of the assistant coaches all played for their respective teams during their high school days.

The CHSFL has been a pillar of consistency in its 58-year history. The league adopted a constitution in its first year, and the first amendment to that constitution wasn’t made until 1997.

However, more than just the 37 players from the league to play in the NFL, the league – especially through the coaches – takes pride in developing young men of good faith. Teaching the Catholic values of sports often trumps success on the gridiron.

The CHSFL relies on a yearly system of power rankings that determines the divisions for the next season. The coaches rank all 20 teams at the end of the season, and the results are added up.  The top 12 teams play in the AAA-AA division, while the bottom eight teams make up the AA-A division.

“We don’t want to see a program get buried,” Hardardt said. “That’s not what we’re in it for. We’re trying to promote football in the Catholic schools. By doing that, we want to make all the schools competitive.”

In basketball or baseball, losing by a significant amount of points or runs is dejecting to a team, but in football, the safety of the student-athletes is more important in determining which teams match up in each division. Even the local public school leagues have begun adopting a system of power rankings based off the CHSFL to promote competitiveness and safety.

Another unique facet of the league is the constant communication amongst the league’s coaches. Every Monday during the season, the coaches meet face-to-face to “break bread,” as Hardardt called it. As a result, any issues from the previous weekend’s games are discussed in person. But this also emphasizes the values that the coaches try to instill in their players.

“Most of the guys that are in this league believe in the mission,” Hardardt said. “They believe what we’re about. We’re about something more than winning a championship. I think there’s enough tradition so that people respect it.”

As the league continues, Hardardt said he hopes an agreement can be reached with the Archdiocese of Buffalo – the fourth New York Catholic diocese – to play a state playoff with the downstate teams. If so, the winner would be crowned the official Catholic state champion.

But again, more so than winning, the league’s coaches and administrators understand the values and the history of the league, which has allowed them to promote the vision of Catholic education through football. 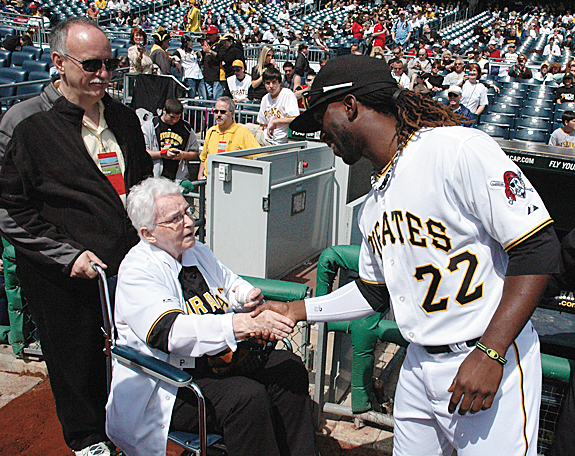 Andrew McCutcheon of the Pittsburgh Pirates greets Mercy Sister Mary Bride Diamond at PNC Park in Pittsburgh April 5. McCutcheon and other players signed a baseball, glove and posed for photos with Sister Mary Bride, who was recognized for her athletic accomplishments as a youth, loyalty to the Pirates and service to the community as a Sister of Mercy.