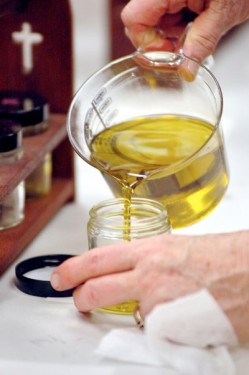 MIAMI (CNS) – Some of the Church’s most ancient traditions and rituals are witnessed during Holy Week, including the preparation, blessing and distribution of oils central to the Catholic Church’s sacraments and rites.

From Jerusalem to Rome to parishes around the world, the pope and local bishops will soon carry out the annual custom of preparing and distributing to churches the holy oils. The chrism Mass is usually celebrated on or before Holy Thursday, which this year is April 2, at the local cathedral with the bishop gathered with his priests. (In the Brooklyn Diocese, the Mass will be celebrated on Tuesday, March 31, at 8 p.m. at St. Joseph Co-Cathedral, Prospect Heights.)

The oils include the oil of the sick, used in the anointing of the sick; the oil of catechumens, which is for those preparing to be baptized and the chrism oil, which is consecrated and used for baptism, confirmation and holy orders.

Third-century writer and saint, Hippolytus of Rome, noted the blessing of the oils and how they were used in the early Church. Later descriptions are found in the seventh and eighth centuries from the “Gelasian Sacramentary,” which among other items described early liturgical practices, prayers, rites and blessings of the Easter font and of the oil and prayers at the dedication of churches.

Even before that, there are Old and New Testament scriptural references to “anointings,” suggesting the importance of holy oil in ancient and biblical cultures.

“First of all, you have the olive tree which was plentiful around Jerusalem and all of the Middle East, and (olive oil) has always been used for food, heating and lamps, for healing of wounds and in the Scriptures – because of the context – used as a sign of God choosing a person or a people as his own,” said Msgr. Terence Hogan, dean of the School of Theology and Ministry at St. Thomas University, Miami.

Msgr. Hogan, who also is an adjunct assistant professor of liturgy at St. Vincent de Paul Regional Seminary in Boynton Beach, Fla., added that since early Christianity priests and bishops have been anointed during their ordination rites.

Throughout history, monarchs as well were anointed with blessed oil, “which was even seen in 1953 when (during her coronation) Queen Elizabeth II was anointed with oil as a symbol of setting (something or someone) apart for God,” he said.

The chrism Mass is traditionally associated with Holy Thursday, with the blessing of the oils taking place at a morning Mass followed by an evening Mass recalling Jesus’ institution of the priesthood and Eucharist at the Last Supper. The oils are often set out for display in large glass or silver urns during the chrism Mass.

Since the Second Vatican Council, individual bishops also have the option of moving the chrism Mass to a date more conducive to convening all of the clergy of the diocese for their annual renewal of vows with the remainder of the use of chrism in their own ordinations.

As in many other dioceses, the chrism Mass in the Archdiocese of Miami is being held before Holy Thursday as a practical matter so that the clergy can join Miami Archbishop Thomas G. Wenski at the Mass and later attend to their own parishes once Holy Week begins, according to Msgr. Hogan.

The preparation and distribution of the oils to parishes varies slightly from place to place, with the elemental oils and other ingredients purchased locally, through monasteries and convents and even ordered online through the Internet.

Virgin olive oil is used for the oil of the sick and oil of catechumens. “The oil of chrism, is distinct in that it is mixed with a resin, balsam, giving it a sweet perfumed fragrance, after which the oil is consecrated by the bishop,” according to Msgr. Hogan.

“We say it is ‘consecrated’ because it is used to truly set apart a person, a bishop or priest when they ordained; it sets apart a person who is baptized and later it is used in the sacrament of confirmation; the bishop literally breathes upon that oil as a visible sign of the Holy Spirit coming down on the chrism oil,” he added.

Some dioceses prepare the individual bottles of holy oils well in advance of distribution, others during or after the chrism Mass.