His visit also coincided with the continuing coronavirus epidemic in China and was part of his broader worldwide tour to advocate for religious freedom in the country.

“I like to visit any place where there are Chinese Catholics because we belong to a special family,” Cardinal Joseph Zen said at St. Michael’s Church in Flushing, where he celebrated Mass on Feb. 16. Hundreds of the faithful, almost all of them Chinese, were in attendance. The Mass was celebrated in Mandarin. Bishop Nicholas DiMarzio, Father John E. Vesey, the pastor of St. Michael’s, as well as parochial vicars Father Lianjiang (Peter) Bai and Father Jaime Hernandez, concelebrated.

Cardinal Zen, 88, was Hong Kong’s bishop from 2002 to 2009, and is a leader for many Chinese Catholics around the world. His visit to Queens marked the first time a Chinese cardinal celebrated Mass in the Diocese of Brooklyn.

“I think those who are far from their motherland feel the need to remember their brothers and sisters, especially now that the situation of the church in China is really miserable; it is under harsh persecution,” he said. “We have this freedom here in this wonderful country, we can pray together, so this is an opportunity for us to console each other.”

At the end of the Mass, Bishop DiMarzio spoke to the faithful about the coronavirus epidemic and how the Chinese community of the diocese is suffering from it. He announced that he has written a pastoral letter in solidarity with them. Father Bai then read the pastoral letter in Mandarin.

In the letter, which will be officially released on Ash Wednesday (Feb. 26), Bishop DiMarzio wrote that during times of epidemics, “we see people looking to blame others.”

In contrast to that attitude, Bishop DiMarzio tells the story of a man who used to bring a present to his grandmother every year. When he asked why, she told him that during the Spanish flu epidemic in 1919, that man, who was still a child at the time, lost both his parents to the flu, and she was the only person in their building willing to prepare their bodies for burial.

The fear now in the Chinese community is palpable. “I have never seen them affected so much for anything like the fear of coronavirus,” Father Vesey said. “Last Sunday I walked through the street in the evening just to see what was going on in our restaurants, and I would say 95 percent of our restaurants had no people and this is the center of Chinese cuisine. People stay at home. [They] have quarantined themselves out of fear.”

The Fight for Religious Freedom

As part of his “religious freedom” tour, Cardinal Zen received the 2019 Wei Jingsheng Chinese Democracy Champion Prize in Washington on Feb. 13. It was awarded by the Washington-based Wei Jingsheng Foundation and was presented to Cardinal Zen by U.S. House Speaker Nancy Pelosi.

The cardinal’s trip takes place at a complex moment for Hong Kong, China and Chinese Catholics. After seven months of pro-democracy protests in Hong Kong —in which the cardinal participated — the situation in the semi-autonomous city remains tense.

“For many years, even as a colony, we enjoyed freedom,” Cardinal Zen told The Tablet. “They promised there was going to be ‘one country, two systems,’ they promised we were going to have a great degree of autonomy. But then they back off on their promises, so now we are in danger of becoming just one more city in China.

“They are pressing on us to make us renounce our autonomy,” he added.

“They want to take away our freedom of speech and that is terrible, so we are really fighting. We really hope our leaders would remember all the promises. What is happening is simply foolish. We hope God will wake them up.”

In his homily, Cardinal Zen reminded his audience that Chinese in the United States should thank God for their religious freedom. “You can go to church every day and pray,” he said in Mandarin, “but those who are in the mainland cannot do so, especially in recent days, when there is no Mass due to the coronavirus epidemic.

“We need to pray for those who are affected,” Cardinal Zen said. “Do something to help them — that’s the way we love each other.” Meanwhile, persecution of Christians in China continues. While the government has been somewhat tolerant of the Chinese Patriotic Catholic Association, established in 1957 by Communist authorities that didn’t recognize the authority of the pope, the members of the underground church, faithful to Rome, have been targets of unrelenting harassment, imprisonment, internment in forced labor camps and worse. Both communities have suffered together and collaborate with each other.

“It is not a question of the two communities becoming more united,” Cardinal Zen told The Tablet. “There are no problems [between them]. The problem is the government. How can we be united? United in our faith? Okay. But they want them to be united in that schismatic church. Just an independent church, no more Catholic Church — that’s the problem. You cannot force unity from outside the church.”

An agreement in September 2018 between the Vatican and the Chinese government — the content of which has never been revealed — aimed to unite the faithful and rebuild the communion of all Chinese Catholics with Rome. Reportedly, the Vatican agreed to recognize seven bishops of the Patriotic Association who had been excommunicated, while the Communist authorities agreed to recognize the authority of the pope to accept or reject future candidates for episcopal ordination. 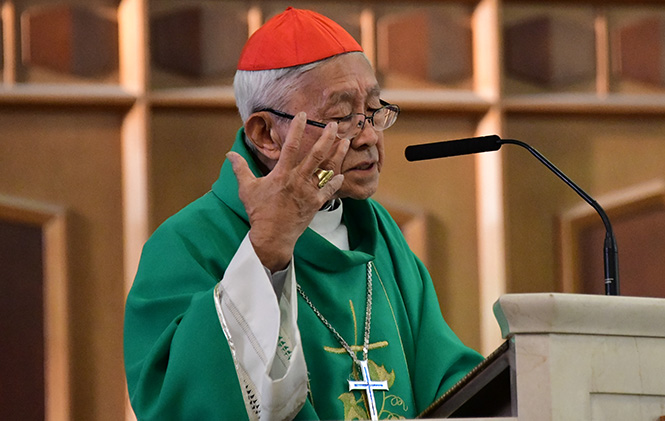 But the repression of Catholics and other religious communities has become worse since the agreement was signed. Cardinal Zen has always underlined his personal fidelity to the pope and the pope’s closeness to him. But he has criticized the current diplomatic efforts to improve relations between the Holy See and the Chinese government.

Asked about the future of the church in China, Cardinal Zen said: “We never despair because we believe in God, we believe in the intercession of Our Lady, so you can endure any kind of difficult situation provided that we pray we are united among ourselves. And we hope better times will come.”