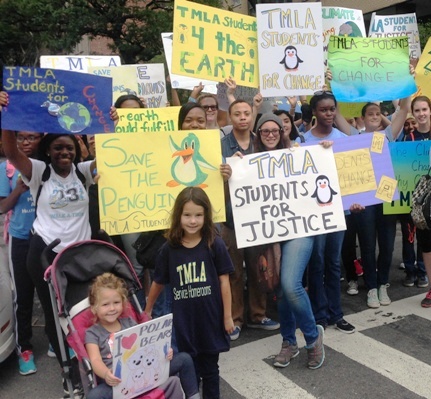 Students from Brooklyn and Queens were among those who joined the People’s Climate March Sept. 21.

As the U.N. convened the Climate Summit 2014, St. Joseph H.S., Downtown Brooklyn, found it important. It was also a way to further the school’s mission of unity to stand with others and call for world leaders to champion an ambitious vision that will lead to a more mutually enhancing relationship with all of God’s creation.

A contingent of 33 students from The Mary Louis Academy, Jamaica Estates, and seven of their family and friends also joined the march to shine a spotlight on global warming.

Organizers called this march of more than 300,000 people “the largest climate-change demonstration in history demanding action ahead of the United Nations Climate Summit.”

With 125 nations represented, this U.N. summit aims to get world leaders to pledge emission cuts, which will form part of a global agreement to be approved at U.N. climate talks next year in Paris.