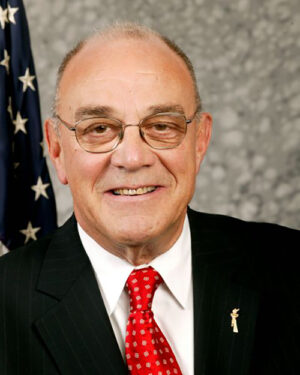 Long is survived by his wife of 59 years, Eileen; nine children; 24 grandchildren; and five great-grandchildren, many of whom were with him when he died at his home in Breezy Point.

“The loss of Mike Long is immeasurable,” New York State Conservative Party Chairman Gerard Kassar said in a statement. “We have lost a good man, a close friend, mentor, and outstanding political leader. A void, for me and many, has been created that cannot be filled.”

For Long, nothing was more important than his Catholic faith, as he told Currents News in a 2019 interview after stepping down as  Conservative party chairman.

He grew up in Queens and was a parishioner of Holy Child Jesus Church in Richmond Hill. That’s where his strong Catholic roots were planted.

“I’m not afraid to enunciate my views,” Long said in a 2019 Currents News interview when he was retiring. “I’m not forcing those views on other people, but I think the views the Catholic faith professes, especially on life issues, is very important.”

Long served as a member of the board of directors of the Cathedral Club of Brooklyn and once served as chairman of the board at Holy Angels Catholic Academy in Bay Ridge, Brooklyn, where he and his brother Tom owned Long’s Wines and Liquors.

“We are saddened to read this about our friend and legend, Mike Long. Our prayers and thoughts are with his family,” said Antonio Biondi, Cathedral Club president. “All of us are certainly better people for having known Mike and blessed that God placed him in our lives.”

A champion of the sanctity of life, Long was always forthright in sharing what the Church taught him with friends and family, according to his wife, Eileen.

“He always said to them, ‘You have to do what’s right. Whether anyone’s looking or not, that’s what you have to do,’ ” she said in a 2019 interview.

Visitation will be held at Clavin Funeral Home in Bay Ridge on July 27 and July 28, from 3-7 p.m.

A funeral Mass at Our Lady of Angels in Bay Ridge is scheduled to be celebrated on July 29, at 9:30 a.m.