The Catholic Bishops of New York State have issued the following statement on casino gambling:

“On Nov. 5, New Yorkers will have the opportunity to decide an important matter affecting our communities. A statewide referendum of the people will be the final say on whether or not to amend the state’s Constitution to authorize casino gambling. As pastors and as citizens, we call on all voters to very carefully consider this measure and all of its potential implications.

“In recent years, New York State has dramatically increased access to legalized gambling in an effort to raise revenue, with the state joining in multi-state lotteries and adding video slot machines and video poker at harness racing tracks across the state. With these initiatives, along with five Indian-run casinos, Off-Track Betting, and ever-increasing variations of scratch-off lotteries, gambling already is big business for the state. Now in a continued quest for additional revenue, the governor and legislature are seeking an amendment to allow for up to seven non-Indian casinos, the first four of which would be sited in three upstate regions. 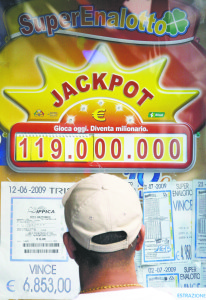 “Even if the state does realize economic benefits envisioned by our elected officials, we voters must also consider the potential for negative consequences. The Catholic Church teaches that gambling is a morally neutral act and that games of chance ‘are not in themselves contrary to justice’ (Catechism of the Catholic Church, 2413). However, the Catechism also warns that ‘the passion for gambling risks becoming an enslavement’ and becomes morally unacceptable when it deprives an individual of what is necessary to provide for his/her needs and those of others.

“When gambling as a revenue stream becomes overly prevalent in a society, the risks associated with problem gambling multiply. With their flashing lights, free-flowing alcoholic drinks, all-night hours and generally intoxicating atmosphere, casinos are more likely than other gambling options to lead to bad decisions and catastrophic losses for patrons, particularly those prone to problem or compulsive gambling. Interestingly, a study by the National Opinion Research Center at the University of Chicago showed the availability of a casino within 50 miles is associated with double the prevalence of problem or pathological gamblers.

“A 2009 study commissioned by the Connecticut Division of Special Revenue on the economic and social impact of Indian casinos in the state, found that while the casinos did boost employment and revenues, they also resulted in serious numerous negative consequences in the areas near the casinos and for individuals. These included a 400% increase in embezzlement arrests, a doubling of DWI arrests, and an increase in substandard and illegal housing for undocumented workers. Of the problem gamblers studied in the report, 62% gambled until their last dollar was gone. Personal bankruptcies in areas where the state’s two Indian casinos are located were more than 10% higher than the national norm in seven of the 10 years after the casinos were built. We must ask, will the presence of casinos forever change the character of areas like Saratoga Springs, the Catskill Mountains and the Southern Tier?

“Furthermore, it does seem apparent that with all of the gambling options already available here, there is only so much revenue to be gained. Indeed, casinos in our neighboring states have been struggling for their very survival due to an oversaturated market, so it is difficult to see how New York’s casino operators will reverse that trend. And while some will argue the casinos will bring employment, the jobs that casinos create tend to be of the low-paying service variety, rather than good-paying, upwardly mobile careers that are so desperately needed upstate.

“When looking at potential sources for new revenue, it is the responsibility of government and the voting public to consider all of the consequences, both positive and negative. While the language on the ballot cites the hoped-for economic benefits, we feel obligated to ask for a more definitive statement as to how and where the money generated by these casinos will be spent. We pray for the good judgment of New Yorkers in weighing all factors before deciding how they will vote on the widespread expansion of casino gambling across our beloved Empire State.”