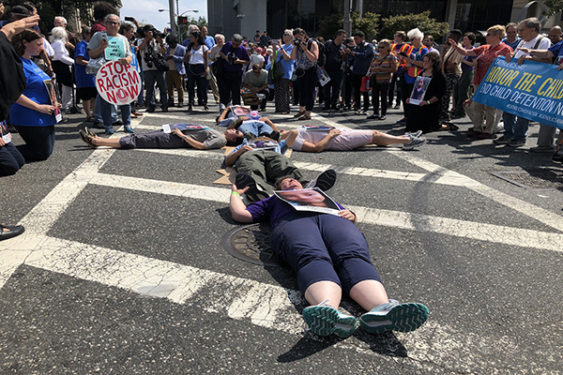 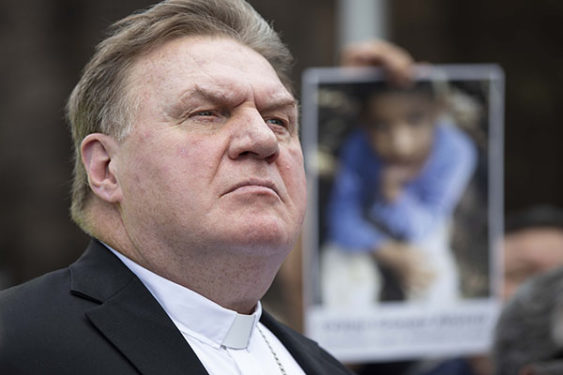 Cardinal Joseph W. Tobin of Newark, N.J., joins a protest outside the federal building in Newark, Sept. 4, 2019, in support of humane immigration reform. 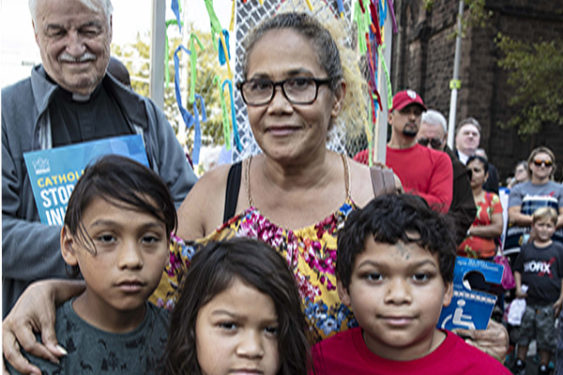 Angela Lopes, whose daughter has been deported, poses with her grandchildren during a protest outside the federal building in Newark, N.J., Sept. 4, 2019, in support of humane immigration reform.

NEWARK, N.J. — The immigration issue came to the streets of Newark, N.J., on Sept. 4, when Cardinal Joseph W. Tobin of the Archdiocese of Newark led a march of about 400 Catholic activists outside Immigration and Customs Enforcement (ICE) offices to protest some of President Trump’s policies on dealing with migrants at the southern border.

The protestors — some of whom came from the Diocese of Brooklyn — called for keeping migrant children safe and migrant families together at the border. “Our values are better than this,” said Father Edward Mason, pastor of Mary, Mother of the Church in Gravesend.

“I am Joseph, your brother, who has been heartbroken by the inhumanity that has increasingly enshrined our nation … who wants it to end now,” Cardinal Tobin said. “These draconian measures are not a solution to our broken immigration system — they are violations of human dignity, and are contrary to all religious teachings, and the sacred call to care for our most vulnerable populations,” he said.

“Unlike others, we don’t have to look up Bible verses to justify the building of walls; there are none.” Cardinal Tobin, the grandson of immigrants, asked Catholics to contact their local officials to “urge them not to manipulate families as political pawns.”

“It isn’t simply a benevolent action,” Cardinal Tobin said. “It’s recognizing in the face of the God we worship in these suffering people; that’s why it’s important to us.”

He also referenced Exodus 22:21 and Matthew 23:35, two Biblical verses that advocate for the humane treatment of immigrants and foreigners.

“As a nation, we must come together for immigration reform which defends the family, protects human dignity, and enshrines the sacredness of life,” Cardinal Tobin said. “Stop the inhumanity!”

The demonstration was part of a national “Stop the Inhumanity!” campaign created by a Catholic coalition of human rights organizations, including First Friends of New Jersey and New York, Faith in Action and Pax Christi USA. Organizers hope to mobilize the faithful to turn prayer into peaceful activism.

“We gather here because of our faith …The Gospel and the values of this nation demand that we act. We gather to bear witness to the dignity of every human person, and to hold our elected leaders accountable for the atrocities … We have witnessed firsthand the violence, corruption and chaos that have forced migrants from their homes,” said Sister Ann Scholz, associate director for social mission of the Leadership Conference of Women Religious, a nationwide organization of nuns.

“We know the pain of mothers who have had their children ripped from their arms, and fathers who have been disappeared, detained and deported while they tried to provide for their families,” Sister Ann said. “So as Catholic sisters and as people of faith, we condemn the Trump administration’s actions to hold children in cages, to imprison families, to use detention as a deterrent and punishment for those who are seeking safety in our country.”

Neither Trump nor the White House press office responded to requests for comment.

The day of protests in Newark began with prayer at St. Mary’s Church, which was a target of anti-immigrant violence in 1854, when the church was ransacked and almost destroyed. Later during the protest, the demonstrators formed themselves into the shape of a cross, blocking traffic in the middle of a busy intersection.

Sister Mary Kay Dobrovolny of the Sisters of Mercy of the Americas, who helped form the cross, traveled to Newark from Detroit to participate. “I’m not a lifelong person who is used to participating in civil disobedience. But I really do feel passionately that these kids need every advantage in life, and there has to be some symbolic way of saying, ‘I stand with you,’” she said.

According to Faith in Action, the Catholic Coalition is planning another demonstration in the border town of El Paso, Texas, next month.