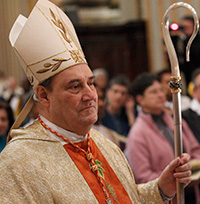 Cardinal Jean-Claude Turcotte, who served as Cardinal-Archbishop of Montreal for 22 years, died April 8 in Montreal’s Marie-Clarac Hospital. He was 78.

He was diabetic, and his health had been in decline for several months. He was moved  to palliative care March 24. Cardinal Turcotte was remembered as a populist, a down-to-earth cleric with a common touch who once supported an ad campaign that urged Montreal residents to pray for his beloved Canadiens to make the National Hockey League playoffs.

At the same time, Cardinal Turcotte was a traditionalist who renounced his Order of Canada in 2008 rather than share the honor with Henry Morgentaler, abortion doctor.

With Cardinal Turcotte’s death, the College of Cardinals has 225 members, 122 of whom are under 80 and eligible to vote in a papal conclave.