“In The Trinity Term of 1929 I gave in, and admitted that God was God, and knelt and prayed: perhaps, that night, the most dejected and reluctant convert in all England. I did not then see what is now the most shining and obvious thing; the divine humility which will accept a convert even on such terms. The Prodigal Son at least walked home on his own feet. But who can duly adore that Love which will open the high gates to a prodigal who is brought in kicking, struggling, resentful and darting his eyes in every direction for a chance of escape?”

With these words C.S. Lewis described in his autobiography, “Surprised by Joy,” his conversion in his late 20s from being a hardcore atheist to finally accepting God.

How did this foremost Christian apologist, poet, novelist, world famous writer and Oxford professor come to this final acceptance? Born in Belfast in 1898, Clive Staples Lewis was known to family and friends as Jack. 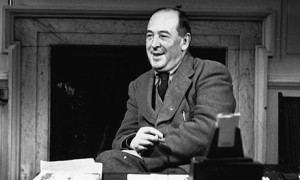 When he was a young boy, his mother fell ill and died. Within two weeks of their mother’s death, their inconsolable father arranged to have him and his brothers sent to boarding school in England.

It was while at school that Lewis claims that he lost his faith. By 1913, he considered himself an apostate.

Jack was sent to be tutored by William Kirkpatrick, a semi-retired headmaster, with the hope that he would receive a scholarship to Oxford. His life with the Kirkpatricks in Surrey was the closest he came to life after his mother’s death, and it was with Kirkpatrick, an avowed atheist, that Lewis made the complete break from his religion and belief in God.

Lewis took the entrance examination to Oxford as World War I was being fought. He failed the mathematics section, but he volunteered to serve in the Army. As an Irish citizen, military service in England was not required, but he wanted to join his brother who had been fighting in France since 1914. He was sent to France and was severely wounded in combat.

Three important incidents came of this, which would resonate for the remainder of his life. He and his roommate, Paddy Moore, vowed to each other that if either did not return from the war the other would take the responsibility for caring for the survivor’s family. Paddy was killed in action. Second, while convalescing from war wounds, Lewis began reading G.K. Chesterton’s essays and third, because he was a war veteran, the entrance examination to Oxford was eliminated. Lewis was admitted without ever passing the mathematics section.

Lewis lived with and cared for his friend’s mother, Mrs. Moore, and her young daughter, Maureen. This arrangement continued until Maureen married in 1940 and Mrs. Moore died in 1951. There is disagreement among Lewis scholars as to just what sort of relationship there was between Lewis and Mrs. Moore. There was much deception involved because Jack did not tell his father that the father’s allowance was being used to support this very unusual domestic arrangement. What little the father did know he found extremely upsetting, and it did not help to soothe an estrangement between father and son.

It is known that Mrs. Moore did not agree with Lewis’ passage from atheism to Christianity, but after his conversion, all speculation should be put to rest. As a faithful Christian, it is certain Lewis made sure that whatever the previous arrangement might have been, it was now purely domestic.

After finishing at Oxford with an emphasis on the Classics, Lewis took another year to qualify in English. He taught English literature at Oxford’s Magdalen College until 1954 when he left Oxford to join the faculty at Cambridge’s Magdalene College.

By 1929, Lewis had many conversations with his friends at Oxford, the most influential of which were J.R.R. Tolkien, a believing Catholic and Hugo Dyson, a believing Anglican. As a result, he became the “most reluctant convert in England.” He took his conversion so seriously that by 1932, he had written The Pilgrim’s Regress: An Allegorical Apology for Christianity Reason and Romanticism, a form of an autobiographical conversion allegory. The books Surprised by Joy: The Shape of My Early Life (1955) and A Grief Observed (1961), which followed the death of his beloved wife, Helen Joy Davidman, complete his autobiographical texts.

Lewis ventured into science fiction when in 1938 he published Out of the Silent Planet, a novel about a rational but innocent race on another planet. This was followed in 1943 by Perelandra, the story of a paradise retained. The final book of the Space Triology – That Hideous Strength: a Modern Fairy-Tale for Grown-Ups written in 1945. Lewis’ favorite novel was Till We Have Faces: A Myth Retold (1956), which is a retelling of the Cupid and Psyche myth as a Christian re-interpretation of an old story.

What catapulted Lewis to fame was his theological fantasy, The Screwtape Letters (1942), a series of letters written by an experienced devil to his apprentice nephew on how to capture a soul for hell. It is written from a diabolical viewpoint and became so popular that it put Lewis on the front cover of Time magazine. His second theological fantasy was The Great Divorce: A Dream, written in 1945. It is the story of a bus ride for souls who must make a decision if they wish to go on to Heaven and thus give up their foolish sins or return to hell and keep them.

C.S. Lewis’ most widely read books are his theological apologetics for the Christian faith. They probably resulted in more conversions to Christianity than any other writings. The Problem of Pain (1940), Mere Christianity (1952), The Abolition of Man (1943), Miracles (1947), Reflections on the Psalms (1958), The Four Loves (1960) and Letters to Malcolm Chiefly on Praye (1964) (published posthumously) are books which are worthy to be read and re-read many times.

Some of these books were the result of radio broadcasts for the BBC that Lewis made during World War II and lectures he gave to the British Armed Forces which made his voice the most recognized in England after that of Winston Churchill.

His writings, which are mostly known to academics and university students, are his works in Literary Criticism namely: A Preface to Paradise Lost (1942); English Literature in the Sixteenth Century (1954); An Experiment in Criticism (1961) and The Discarded Image: An Introduction to Medieval and Renaissance Literature (1964). The latter is comprised of a series of lectures Lewis had given to his students over the years.

Due to Hollywood’s desire to make popular movies, The Chronicles of Narnia have taken on a new life. During World War II, British children were evacuated from London to the countryside to protect them from bombings. Several children were sent to live at The Kilns, the Lewis home just outside Oxford. This inspired him to write a series of seven books for children under the combined title.

Between the summer of 1948 and March, 1950, Lewis had written five of the Chronicles. The series was completed by 1956 when the final book, The Last Battle, won the Carnegie Medal for the best children’s book of that year.

C.S. Lewis died just before his 65th birthday on Nov. 22, 1963 – a day made infamous by the assassination of President John F. Kennedy. Lewis was buried four days later at the Headington Quarry Parish.

The reluctant youthful convert had spent his life defending the truths of Christianity for millions of readers.

George Sayer, his friend and biographer, described the final scene: “A lighted church candle was placed on the coffin, and the flame did not flicker. For more than one of us, that clear bright candle flame seemed to symbolize Jack. He had been the light of our lives, ever steadfast in friendship. Yet, most of all, the candle symbolized his unflagging pursuit of illumination.”

[hr]Clare Sarrocco is a resident of Brooklyn and a member of the C.S. Lewis Society of New York.[hr]