“It’s important to remember the people who served this country”

“It’s important to remember the people who served this country and to keep the memory  of all those who died serving the country,” said Aalbue, who did tours of duty in Japan and South Korea.

That’s why he is a driving force behind the Brooklyn Memorial Day Parade which, even in its current scaled-down form, remains the nation’s oldest such procession at 154 years and counting.

Bay Ridge, which hosts the parade, is like a small town to the people who live there and the march gives the community the chance to put its flag-waving, patriotic heart on display.

Sponsored by the United Military Veterans of Kings County Inc., this year’s parade will take place on Memorial Day, Monday, May 31, at 11 a.m. — with a twist. Instead of marching on foot, participants will be driving in a caravan of antique cars and military vehicles like Jeeps and Humvees.

The caravan will start off from Third Avenue and Bay Ridge Parkway and travel to the Brooklyn Veterans Hospital at 800 Poly Place for a wreath-laying ceremony at 11:45 a.m. The motorcade ends at the hospital, but following the wreath-laying, organizers will invite the public to go to John Paul Jones Park on Fourth Avenue and 101st Street, for a ceremony at 1 p.m. where “Taps” will be played by a bugler.

Last year, because of COVID-19, the committee organized a small caravan of cars. This year’s procession promises to be much bigger, said Aalbue, the parade’s chairman.

The grand marshal is David Vogel, a 97-year-old World War II veteran from Hartford, Connecticut. “He served in the Mariana Islands and he was in some of the fighting in Guam,” Aalbue said.

“I think it’s part of our history to honor our veterans,” said Connie Ranocchia, the parade’s president, who was an Army missile technician during the Vietnam War. “We have to honor the people who kept us safe. And we have to remember the ones who didn’t come back. They made the ultimate sacrifice. We can’t forget their families, either. They made a sacrifice, too.”

Peter DeAngelis, the parade’s chairman emeritus, a Korean War veteran and a Purple Heart recipient, has been marching since he was a boy. His cousin, who served in World War II, brought him to his first parade. 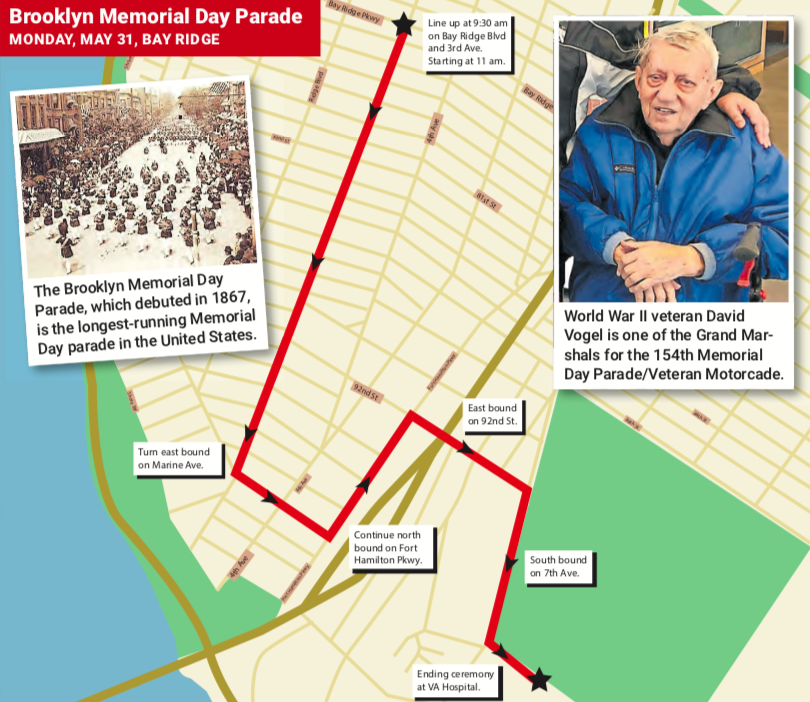 Memorial Day is a big deal

“Memorial Day is a big deal,” he said. “It reminds us that we wouldn’t be walking around enjoying all the things we have if not for the people who went to war and fought for us.”

According to the New York City Department of Veterans Affairs, the Diocese of Brooklyn was home to more than half of the city’s 210,000 veterans in 2016. Queens accounted for the most veterans, 27.9 percent, while Brooklyn had 25.7 percent.

Cary Spickler, the parade committee’s treasurer, recalled that his late father Fred, a World War II Marine Corps veteran, didn’t talk much about his service. “Those guys did what they had to do and they got on with life,” he said.

Spickler said that while he enjoys the entire parade, his favorite part is always the ceremony at John Paul Jones Park. “We get to say a few words and talk about how important Memorial Day is — that it’s not about barbecues or used car sales,” he said.

Aalbue’s involvement in the parade dates back more than 25 years and stems from his days working in public relations at the Fort Hamilton Army Base and the VA Hospital.

“I got involved with the older veterans, the Korean War veterans, and the World War II guys. And I really respected those men,” he said.

The parade isn’t the only activity the United Military Veterans of King County are involved in; its members also advocate for veterans’ causes and bring veterans into schools to talk to students.

“We reach out to veterans to make sure they know about the government benefits they’re entitled to,” Ranocchia said. “And definitely we try to educate the youth to try to keep them involved.”

The reason for the parade’s longevity is simple, said Aalbue. “I think it keeps on going because everybody loves a parade. “It’s a celebration. It’s a remembrance because, of course, we want to remember all those who died. They would want us to move forward.”

One thought on “Brooklyn’s Memorial Day Parade Makes a Comeback, of Sorts”