God must be a baseball fan, and the events of the 1961 season solidify this claim.

Only God could have allowed two Roman Catholics to be linked forever in one of the game’s greatest moments. Those Catholics were New York Yankees slugger Roger Maris and Sal Durante, the young man who caught Maris’ 61st home run ball that year.

Though the New York fans and media would have rather seen Yankee favorite Mickey Mantle break Ruth’s record if anyone was to do so, it was Maris who accomplished the feat. The “M&M Boys” were neck-in-neck down the stretch, but Mantle suffered an abscessed hip, forcing him to miss the final few games.

Just 26 at the time, Maris endured daily stress in trying to beat the record.  He lost clumps of his hair and was ridiculed for trying to surpass a New York baseball legend.

Meanwhile, 50 years ago, Durante was a 19-year-old auto parts deliverer. The Coney Island native attended St. Finbar parish, Bath Beach. Not only was he a devout Catholic, but he was also a devout Yankees fan.

Durante originally didn’t have tickets to the Oct. 1 game, but he decided to head to Yankee Stadium, the Bronx, anyway.  He was joined by his fiancée Rosemarie, his cousin John and John’s girlfriend, Linda.

“We went to the stadium that morning because we had nothing to do that day,” said Durante, now 69.

Durante asked the ticket teller at the stadium box office for four seats in right field.  With history on the line and the fact that Maris was a left-handed hitter, the right field seats should have been sold out way in advance of the game. However, only 23,154 fans attended that game since the Yankees had already clinched a playoff berth.

Surprisingly, Durante’s group was able to purchase four tickets in right field for $2.50 apiece.  Three of the seats were in one row, while the fourth seat was in the row directly behind.

“I never expected it, but I took a chance,” said Durante. “That’s how we wound up getting the seats.”

Boston Red Sox pitcher Tracy Stallard retired Maris in his first at-bat that day.  As Maris stepped to the plate in the fourth inning, Durante ironically switched seats with his fiancée, who had been sitting in the row behind him. He felt bad since Rosemarie didn’t really understand baseball and needed someone to tell her what was going on.

“I thought to myself, ‘Boy, what a wonderful thing it would be to catch a home run if he hit it,’” Durante said.

Maris settled into the box and awaited the first offering from Stallard.

“I watched every move that Tracy Stallard made,” said Durante. “I didn’t take the ball away from my eyes. I really concentrated on it.”

The words of former Yankees shortstop and then broadcaster Phil Rizzuto best describe what happened next: “Two balls, no strikes on Roger Maris. Here’s the windup. Fastball hit deep to right…this could be it…way back there. Holy cow!”

Maris crushed the 2-0 offering 360-feet into the right field seats. As if it was meant to be, Durante was there waiting.

“When Roger hit that baseball, I knew it was going over my head,” said Durante. “As soon as he hit it, I jumped up on my seat, and I reached as high as I could reach.”

Durante made an off-balance, barehanded, one-handed catch. In fact, the catch was so good that the Yankees probably should have signed him right then and there.

“The ball just came to me right into the palm of my hand,” Durante said. “It knocked me over into the row behind, and that was it. If I didn’t jump up on my seat, I would have never caught it.”

Maris circled the bases as if nothing out of the ordinary had happened. Upon reaching the dugout, his teammates formed an impenetrable wall, forcing Maris to take a bow.

As this was going on, two security guards rushed Durante through the Yankee bullpen and underneath the stadium, where they waited for Maris. Between innings, Durante and Maris met briefly, with Durante wanting to give Maris the ball.

“Keep the ball,” Maris told Durante. “Maybe you can get yourself some money.”

Sam Gordon, a restaurant owner in Sacramento, Calif., offered Durante $5,000 for the ball, which today would be the equivalent of just over $30,000. Gordon, who also paid for Durante’s honeymoon, presented the ball to Maris as a gift. The ball was then rightfully back in the record-setter’s hands.

“If I never hit another home run, this is the one they can never take away from me,” Maris said.

“I hated to see the record broken,” said Rizzuto. “But it was another Yankee that did it. When he hit the 61st home run, I screamed so loud I had a headache for about a week.”

With the celebration of the 50th anniversary now passed, the two Catholics will be forever linked in baseball lore.

“It makes me feel great,” Durante said. “I’m part of history for 50 years. I feel like I’m part of the Yankees and part of Roger.” 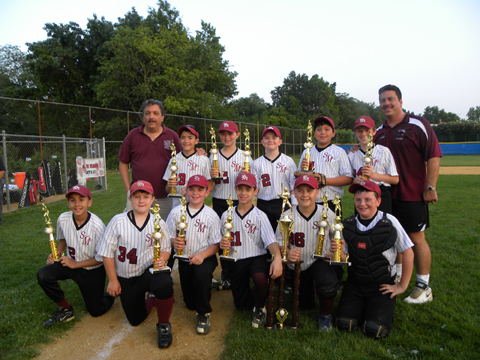