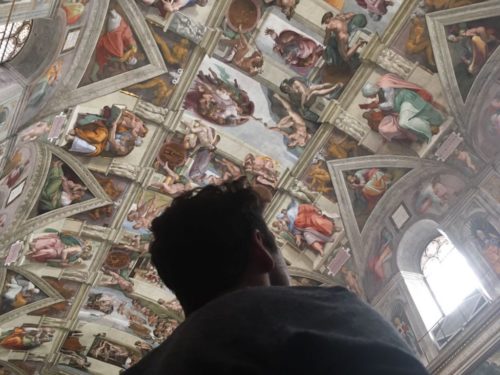 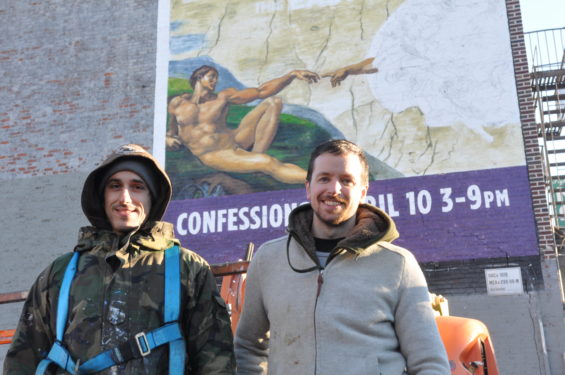 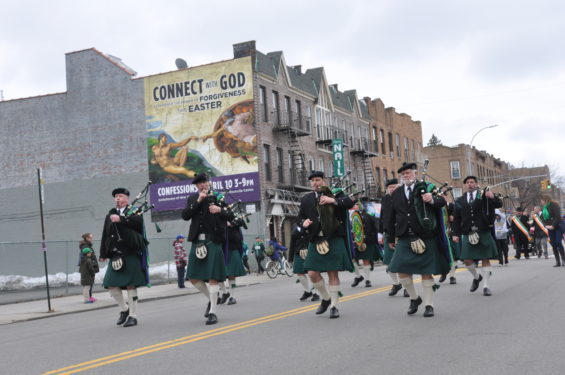 ROME – We all know the image: God’s arm extending across the pastel blue sky, his muscles in tension, his body twisted and enveloped in a brain-shaped veil, His finger inching toward that of Adam, who lies seemingly lifeless, waiting for that ‘touch of life’ that will give birth to the race of men.

Michelangelo’s memorable fresco of the creation of Adam, placed on the ceiling of the Sistine Chapel at the Vatican, took the better part of four years to be completed, from 1508 to 1512. But for an artist from New Jersey, recreating the masterpiece took but three days.

In March, as part of a DeSales Media Group campaign, artist James Raczkowski, along with Mike Fusco and Kerry Thompson, set out to create a 20.5 by 23 foot rendering of the Creation of Adam on a building on Third Ave. in Bay Ridge. The occasion was a public relations drive for Reconciliation Monday, when the Archdiocese of New York, and the Dioceses of Brooklyn and the Rockville Centre collaborated to encourage faithful to attend confession before the celebration of Easter.

On Sept. 25, Raczkowski came to Rome to visit the original masterpiece and see with his own eyes what he had only viewed in art textbooks or digital images, but had been embedded into his artistic background for most of his life.

“In his paintings, like in the Sistine chapel, the color and his sense of form are incredible. It seems like he just knew form, maybe better than anybody else and he was able to just ‘create the body’ from imagination,” Raczkowski, 30, said while walking through the majestic yet crowded halls of the Vatican Museums. “I think that’s something that a lot of artists who paint the figure aspire to do but it’s really difficult and it takes years, like a lifetime. It seems like he had that mastered like nobody else.”

In truth, it took time for Michelangelo to understand the art of fresco painting. When he was first commissioned to paint the ceiling of the chapel by Pope Julius II, we know from his letters and historical documentation that he was less than enthusiastic. “I’ve hardly done anything with a brush and you want me to paint 2,000 square feet on a curved ceiling!” he allegedly said.

In painting the chapel, Michelangelo played to his strengths. He was never going to be able to paint with the same methodic and elaborate technique of some of his contemporaries. He was a sculptor, and his talent lay in the ability to create plastic and energetic figures bursting from the marble. So when the time came to elaborate on the project, Michelangelo envisioned countless bodies, toppling, crawling, squirming and turning until Judgment Day. No one had seen anything quite like it at the time, and the result still captivates audiences today.

As an artist, Raczkowski also drew from his individual strengths and experiences. After joining the military at the age of 17, he returned from Iraq in 2009 with a unique perspective on war, trauma, and memory as his website claims, which reflected on his aesthetic rendering.

“It made me feel like I had something to say as an artist,” Raczkowski said, as he followed the path that would ultimately lead to the Sistine Chapel. For a kid from a blue-collar family in coastal New Jersey, landing in the empty tan-colored landscape of Iraq amplified his horizons. “It was the best and worst experience of my life,” he said, echoing many other veterans’ sentiments.

His time in the military served him well when he later received the Colonel Kenneth R. Stow Memorial Scholarship while studying Fine Arts at Stockton University. He then completed his Master’s Degree at the New York Academy of Art.

Raczkowski looks the part of the military man as he scans the artwork of the Vatican Museums, the tattoo on his arm – the Latin phrase ‘Fortuna Audaces Iuvat,’ meaning luck favors the bold – peaking from under the sleeve of his t-shirt. His hands are thick and wide, almost an exact replica of his father’s, who worked as a house painter his entire life.

“I just slop paint on the surface,” his father specified jovially, adding that his son inherited the artistic gene. “He does the real brushwork!”

As he approaches the Sistine chapel, Raczkowski’s anticipation becomes more palpable. He had already tried to visit the museums in the year 2000, but was too late to be allowed entry. Seventeen years later, the artist was finally ready to see the real thing.

“What I am really excited about is seeing the color, because you can look at that in pictures but I don’t think you get a real sense,” he said. “I am just really excited to see his sense of color and the space. I think that’s important.”

As he’s ushered inside the packed chapel, with guards shushing the crowd and tourists sneaking in their phones, Raczkowski’s head immediately tilts upward, captured by the irresistible surge of figures, who by Michelangelo’s design guide the viewer’s gaze toward the ceiling.

The chaos of visitors shoving and pushing on the ground is echoed by the hustle and tussle portrayed on the vault. The eyes of the painter bounce from one corner to another taking it all in. When asked if this is what he expected, Raczkowski answered laughing: “No, not at all!”

And thus, the artist meets the master and for a few minutes Raczkowski has the opportunity to engage in an artistic conversation, through time and space, with Michelangelo, who speaks through his enduring and timeless art.

Upon exiting the museums, Michelangelo returns to the past and Raczkowski’s artistic vision looks forward toward new projects. Lately he has been drawn to Islamic art, especially tiles, and during his visit in the museum more than once his imagination was captured by the intricate Roman mosaics on the floors.

“I really like the sense of design. It’s so different,” he said. “I have been looking at a lot of Persian painting and just how they stack figures and how they use composition in a very different way than Western art, and I really like the tiles. They are just incredible, the math and geometry.”

Raczkowski admitted that in his latest work, human figures have given space to more abstract and conceptual paintings. “I still draw all the time, I draw people,” he said. “I just haven’t been really putting it in my personal work as much.”

But in the future Raczkowski said he might try and tackle Michelangelo’s true passion, the art of sculpting.

“I just need to find the space,” the artist, who lives in Brooklyn, said. Whether this is accomplished or not one thing remains certain, Michelangelo has left an indelible mark in the mind of this artist, as he has done with many before him and will do to many yet to come.