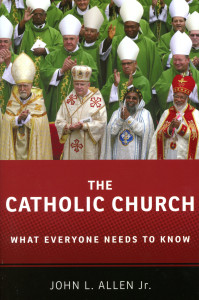 Instead, the book provides factual data for framing issues and for understanding how Catholicism got to where it is today. This framing should help readers evaluate future Church actions and evolutions as it wrestles with internal problems and with communicating its religious message to a multifaceted world. For non-Catholics and lax Catholics wanting more than a catechism understanding of the Church, this is book is an excellent start.

Allen compiled the book after decades covering Catholicism as a correspondent for the National Catholic Reporter and Vatican analyst for CNN. He calls it a “one-stop shopping guide” to the Church.

But the book also presents an unconventional view of the Church, breaking stereotypes by stressing the diversity and universality of an institution with members who span the globe. Allen calls Catholicism the “McDonald’s of organized religion,” offering a standard menu supplemented by variety geared to local tastes. Some, though, may think that Allen takes inculturation too far when he says that Catholic grass-roots culture is just as evident in a topless beach in Rio de Janeiro as in the Brazilian city’s cathedral.

Given the Church’s demographics and gender distribution, Allen notes that the “typical Catholic” is not a white priest living in Rome but a Brazilian mother of four as Brazil is the largest Catholic country population-wise, and the Catholic population is rapidly shifting to the developing world commonly referred to as the “South.”

This population shift away from the developed Western world will strongly influence the Church’s theology and worldview, Allen notes, as Southern Catholics tend to be more conservative on abortion, gay marriage and family life, while at the same time more leftist regarding social justice issues and the global imbalance of political and economic power favoring the West. The book has sections on Church history, theology, worship and hierarchy. But there are also parts devoted to contemporary Church scandals and how the Church copes with the hot-button issues of money, sex and politics.

Such an approach has to necessarily paint with a broad brush, risking oversights and glossing over important facts and nuances. For instance, Allen has the First Vatican Council in 1870 declaring that the pope is infallible when speaking on faith and morals in communion with the world’s bishops (collegiality). Only the papal part belongs to Vatican I. The collegiality part was not nailed down until the Second Vatican Council almost 100 years later.

Regarding liberation theology, the book has Pope John Paul II generally favoring the catchphrase “option for the poor” used to stress Church commitment to the downtrodden. But it fails to draw out the nuanced support as Pope John Paul used the word “preferential” before the phrase, emphasizing that this option was not at the exclusion of other social and economic classes. This one-word addition prevented the phrase from being used as a Catholic mask for the Marxist concept of class struggle as the motor of history.

Allen also offers his own list of the three best and worst popes. Interestingly, St. Peter is on neither.

These, though, are minor glitches in comparison to the wealth of information and understanding Allen provides in easily readable language.

Unfortunately, the book was written before the surprise resignation of Pope Benedict XVI and the groundbreaking election of Argentine Cardinal Jorge Mario Bergoglio as Pope Francis, the first pontiff from the South. Hopefully, a revised edition will be published incorporating this historic passing of the baton and how it once again brought renewed international scrutiny of one of the world’s most durable organizations.