For Caitlin Sarubbi, “seeing” is certainly not “believing.”

How could “seeing” be “believing” for her, since the 23-year-old was born with Ablepharon macrostomia syndrome, a condition that causes vision impairment?

Instead, Sarubbi doesn’t need to “see” clearly to “believe.” She’s spent her whole life believing in her abilities, and it’s led to an impressive pedigree as a Paralympic skier.

But her journey is far from over, as she attempts to qualify for the 2014 Winter Paralympics in Sochi, Russia.

Not bad for someone whom doctors said wouldn’t live through the night when she was born.

Ablepharon macrostomia literally means “born without eyelids.” Sarubbi’s fatal deformities forced her to undergo over 70 reconstructive surgeries beginning at just four days old. There are only about 14 cases of this condition documented in the world.

The terrorist attacks of Sept. 11, 2001 changed Sarubbi’s life forever. Her father, John, is a firefighter for the FDNY, and after the attacks, Disability Sports U.S.A., an organization in Breckinridge, Colo., invited firemen with children with disabilities to Colorado for a week of skiing.

For the first time in her life, Sarubbi felt no limitations due to her condition. On the slopes, she experienced the feeling of freedom that allowed the sport to become her new passion.

Back home, she joined a local chapter of Disability Sports U.S.A. called the Adaptive Ski Foundation based at Windham Mountain in Upstate N.Y. The borough of Brooklyn isn’t exactly known for its picturesque skiing mountains, so Windham became Sarubbi’s primary training location.

Since she’s classified as a visually impaired skier, Sarubbi requires the assistance of a guide that skis down the mountain in front of her. Her guide is her younger sister Jamie – a student at the University of Notre Dame, South Bend, Ind. – and the two communicate constantly via headset on mountain pitches and changes in snow condition.

Between her academic course load in high school and training with the Adaptive Ski Foundation, Sarubbi had a rigorous schedule. But all her hard work paid off in a span of three days in April, 2008. She was accepted into Harvard University, Cambridge, Mass., and she then qualified for the U.S. Adaptive Ski Team.

After completing her first semester at Harvard in the fall of 2008, Sarubbi took a three-semester leave of absence to commit full-time to training for the 2010 Winter Paralympics in Vancouver, Canada. A second-place finish in the 2010 World Cup “Super G” race cemented her spot on the U.S. team for Vancouver to compete in five alpine skiing events.

Sarubbi had just turned 20 years old two weeks before the Paralympics – making her the second youngest athlete on the entire U.S. team. She was the only U.S. Paralympian asked to carry the torch during the Opening Ceremony – an honor she will never forget. In her five events, she recorded two sixth-place finishes and an eighth-place finish.

When most athletes finish the Olympic games, they instantly begin their training regimen for the next set of games four years later. However, Sarubbi was eager to continue her degree at Harvard. She completed five semesters, but thoughts of competing at the 2014 Winter Paralympics in Sochi soon entered her mind. Most competitive athletes cannot resist the thrill of reaching the Promised Land one last time.

“I said to myself, ‘This is as good a time as any to be able to put my real life on hold and try for one more time,’” Sarubbi said.

So she again took a leave from Harvard to begin training early in 2013. She’s had to play a bit of catch-up after taking time off, since her competition has been training non-stop. Her experience from competing in the Vancouver games though could give her a mental advantage over the rest of the field.

Skiing is an expensive sport to begin with based on equipment and travel expenses. But for Sarubbi, expenses are doubled since she always needs her guide. For Vancouver, Sarubbi’s sister Jamie was still in high school, so she had to pay a guide $45,000 for the games. Her total budget for Vancouver was $120,000.

Sarubbi is grateful to her sister for putting her education on hold and voluntarily being her guide, but the duo still has a $60,000 budget for the upcoming ski season that includes races in Canada, Colorado and Europe. Of that total, they still need to raise $30,000 for their season to continue.

Sarubbi is accepting tax-deductible donations, and either corporate sponsors or individuals can donate. Visit the “Support Caitlin” tab at www.caitlinsarubbi.com to donate. The more times she races, the better chance Sarubbi will have of qualifying for Sochi. However, if she can’t raise the money, competing in Sochi could be in jeopardy.

“Basically, Jamie and I are trying to do everything within our control … training well, skiing well … and then hopefully that will be enough for the coaches to put us through,” she said. 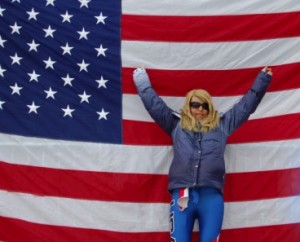 Sarubbi has certainly experienced her share of obstacles in her young life, but through it all, she’s remained grounded in her Catholic faith. Her mother, Cathy, is very religious, and she gave her daughter a cross necklace and rosary beads that Caitlin wears for every race.

“I’m a big believer in ‘everything happens for a reason’ and ‘God only gives you what you can handle,’” Sarubbi said. “Not only before but even now through training, God has a plan for everyone. If He wants us to go (to Sochi), we’ll go.”

Eventually, Sarubbi plans to finish her social and cognitive neuroscience degree at Harvard. She’d like to someday be a neurologist or psychiatrist, since she was inspired by the doctors who saved her life as a child.

But before she worries about her career, Sarubbi is focused on getting back to the Paralympics. She’ll find out in early February if she’s made the U.S. team.

For Sarubbi, “seeing” doesn’t have to be “believing,” because she’s believed all along that her next stop is Sochi.