The bishops of New York State travelled to Albany on Tuesday and Wednesday of this past week to rally support for the education investment tax credit legislation under consideration in the state legislature.

Cardinal Timothy Dolan, Bishop Nicholas DiMarzio and the bishops asked Gov. Andrew Cuomo and legislative leaders to include the tax credit in the state budget, which is currently being negotiated.

“Education tax credits are about helping students, and I pray for their sake that our efforts are successful. The time to pass this bill is now,” said Cardinal Dolan.  “With the support of so many of our state’s great labor unions and business leaders, and so many of my brothers and sisters in ministry, I think we have a great chance to do so.”

The bill that the bishops are backing (S.6808, A.1826-C) is sponsored by Senator Martin Golden (R-Brooklyn) and Assembly Member Michael Cusick (D-Staten Island). It would create a tax credit for those who make a charitable donation for educational purposes.

The bishops see this as a reasonable request since New York State already provides tax credits for many other purposes.

Low-income and middle-class students would benefit directly from up to $150 million in annual charitable contributions to non-profit scholarship organizations providing tuition assistance, such as Futures in Education which aids Catholic school students in Brooklyn and Queens. The new donations for scholarships would make private and parochial education a reality for families seeking new quality educational opportunities and assist those already enrolled who are struggling to afford tuition at schools that best meet their needs. 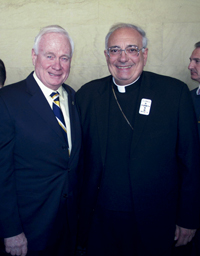 Additionally, donations to public schools and public school districts would be increased by the same amount. The bill would also give all school teachers a first-ever New York State income tax credit when they spend their own money on classroom supplies.

No government funds would flow to private or parochial schools.

“For the last 12 years, I was pastor of St. Matthias parish in Ridgewood, which has a large and diverse elementary school population, and I have seen firsthand the struggles of working families to pay the increasing tuition costs,” said Bishop-elect Edward Scharfenberger, who will be ordained April 10 as Bishop of Albany.

“We hold the line as much as humanly possible, but the costs continue to rise every year, and our families sacrifice so much for the opportunities our school provides. This tax credit can be a game-changer in increasing private giving to scholarship programs to help the families at St. Matthias, and all across New York.”

The state’s Catholic schools are facing a crisis. While demand is still high, families increasingly are unable to afford tuition, which has risen to keep pace with costs. Decades ago, these schools were largely staffed by religious sisters and brothers, which is no longer the case, leading to dramatically higher payrolls.

As a result, more than 250 Catholic schools in New York State have closed statewide over the last 20 years, dozens of them in the past few years alone.

Recently the Diocese of Buffalo announced a new round of double-digit school closings at the end of the current school year.

“If this proposal had already been law, I am convinced we in the Diocese of Buffalo wouldn’t be closing 10 schools in June,” said Buffalo Bishop Richard Malone. “How many more fine schools must we lose? For the sake of all children, the education investment tax credit must pass.”

More than 65 organizations – labor unions, community groups, business groups, clergy, educators and others – have signed on in support. The initiative is sponsored by two-thirds of the Assembly Democratic majority, including leaders of the Black, Puerto Rican, Hispanic and Asian Legislative Caucus. It has passed previously in the Senate with overwhelming support from Democrats and Republicans, and has been included in the Senate’s budget resolution.

“The Education Investment Tax Credit is the top priority of the New York State Bishops this year, for a simple reason: If a child cannot access a quality education, whether in a public, religious or charter school, then he or she will not succeed in life. The evidence of this is clear,” said Bishop Nicholas DiMarzio.

“Good schools lift children out of poverty, and give them a chance. It is time to stop playing politics with the families of our state, and time to pass this necessary bill. I am very grateful for the courage of so many of our union leaders for standing up for their members who have children in non-public schools.”

Among the most recent supporters of the proposal is the Brooklyn Chamber of Commerce.

Chamber president and CEO, Carlo Scissura, said, “The Brooklyn Chamber of Commerce is pleased to join with respected leaders and organizations to endorse the proposed Education Investment Tax Credit. We believe this credit will increase charitable donations to public schools and scholarships to low-income and working family students who want to attend parochial and other private schools.”