$600,000 Raised for Catholic Education and Evangelization

More than 700 people of good will showed their support for Catholic education and evangelization by attending the annual Bishop’s Christmas Luncheon at Russo’s On the Bay, Howard Beach, Dec. 7.

Hosted by the Catholic Foundation for Brooklyn and Queens, the luncheon raised $600,000 to help children attend Catholic schools through the Bishop’s Scholarship Fund, and to foster youth ministry and evangelization efforts in the diocese.

Joseph Dugan accepted the Emma A. Daniels Benefactor Award on behalf of his parents, Barbara and Brendan, president of St. Francis College, Brooklyn Heights, since 2008. Brendan Dugan also serves on the board of Futures in Education’s Endowment Fund, and on the Brooklyn Diocese’s finance council.

“Barbara and I would not be the people we are today were it not for our Catholic faith and the Catholic education that we have received throughout our lives. It has formed our identity and that of our family,” Brendan Dugan wrote in an acceptance letter read by his son.

“We believe in the importance of Catholic education and as the products of it, we do what we can to continue to support the vital and important work that Bishop DiMarzio and the Catholic Foundation for Brooklyn and Queens do.

“It’s our way of ensuring that as many students as possible are afforded a quality and morally sound education.”

The Spirit of Hope Award was presented to Stephen Somers, owner and president of Vigon International, Inc., a leading manufacturer of flavor and fragrance ingredients.

He started a scholarship at Cathedral Prep, and helped fund the recent science lab renovation there. And he provides scholarships to recent immigrants through the ACES Program at St. Joseph’s College, where he sits on the board of trustees.

Somers also contributed to church renovations at St. Mel Church, and at Our Lady of the Blessed Sacrament, Bayside, where his cousin, Father Robert Whalen, is pastor.

He credited his others-focused outlook on life to his Catholic education and Sister Agnes in first grade who explained to him that many people are in need and suffering all around the world.

“With the blessings that I have,” he said, “I want to help as many people as I can.” 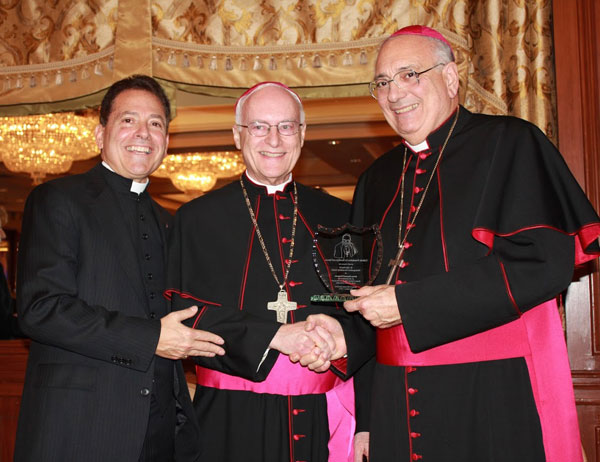 Bishop Chappetto accepted the St. John Paul II Distinguished Stewardship Award “not only in my name but in the name of all the priests of the diocese. They are true stewards of the gifts that God has given them. We have so many, many wonderful priests and I am privileged to serve them as the vicar for clergy.”

The bishop, who is also vicar general for the diocese and pastor of St. Kevin, Flushing, then expressed gratitude for the blessings God has given him personally, including his Catholic education, the gift of faith and ability to serve God and His people.