The late Auxiliary Bishop Joseph M. Sullivan was remembered with a street co-naming last weekend in Middle Village. His sister, Fran, suggested that it was appropriate because she said, “He was a man of the streets.”

She pointed out in her remarks at the dedication ceremony April 16 that Bishop Joe grew up playing stickball in the streets of Brooklyn. He led demonstrations through the streets. And he participated in prayer processions in the streets.

“Joe would love to have his name on a street,” she said.

Middle Village was the right neighborhood because Bishop Sullivan, who died from complications of an automobile accident on the Long Island Expressway in June 2013, celebrated Sunday Mass in Our Lady of Hope Church for almost 50 years. Since he served so many years in administrative positions, this was as close as he came to being assigned to a parish.

The co-naming of a street was the idea of the parish’s Holy Name Society that wanted to do something to memorialize the prelate. The group’s moderator, Father Robert Armato had suggested it, the Society endorsed it and brought the idea to City Council member Elizabeth Crowley, who got the proposal passed.

“I was so honored to attend the eight o’clock Sunday Mass that he celebrated for so many years,” said Robert Leavy, president of the Holy Name.

“It was truly wonderful just to be in his presence. This is a great way to remember him.”

Bishop Nicholas DiMarzio squeezed the dedication ceremony into his already crowded schedule for the day. He explained that he had just come from a Court of Honor luncheon that Bishop Sullivan had started in 1972 to raise funds for Catholic Charities.

“He reached across boundaries. He will not be forgotten and this small remembrance will be a reminder of all the good that he did.”

Councilwoman Crowley, who served as emcee for the event, called it “a celebration of Bishop Sullivan’s service and life.”

She recalled that he was “highly respected and greatly loved” because “he sought to care for the entire human person.” 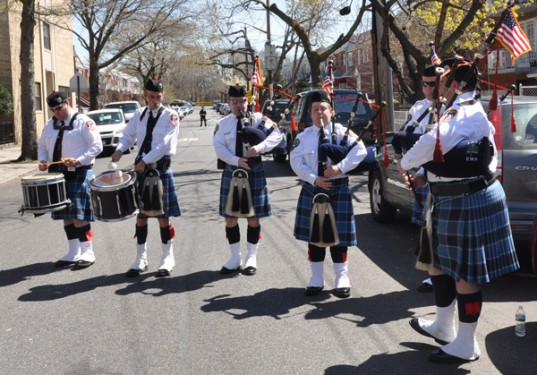 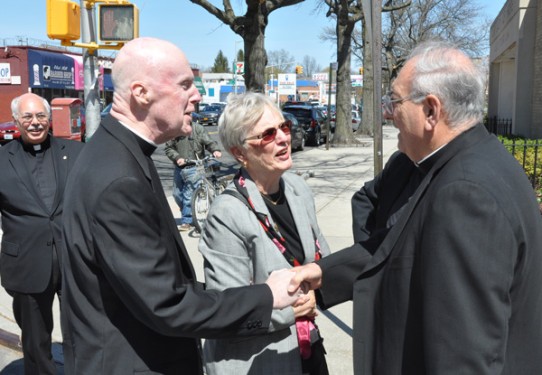 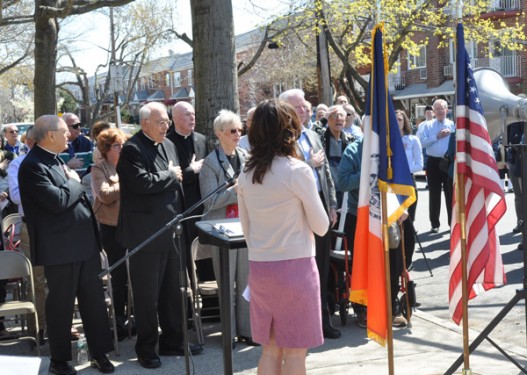 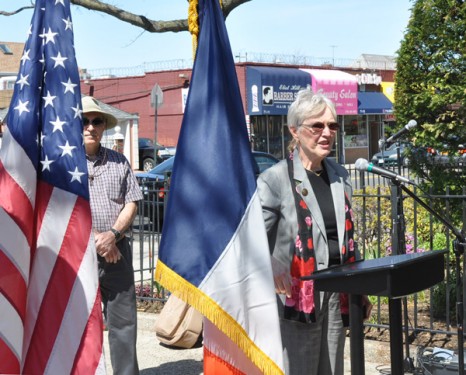 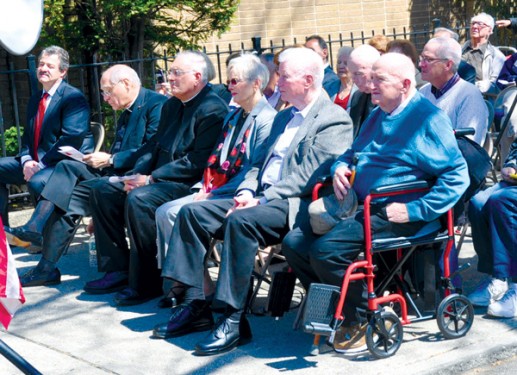 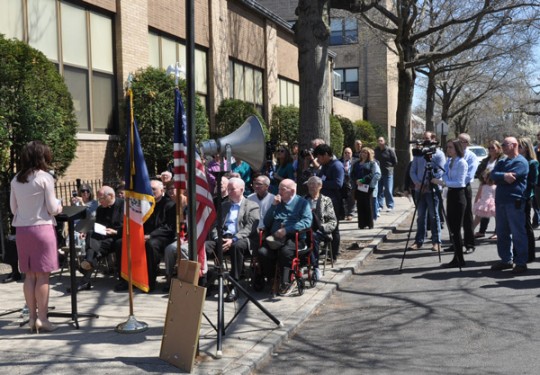 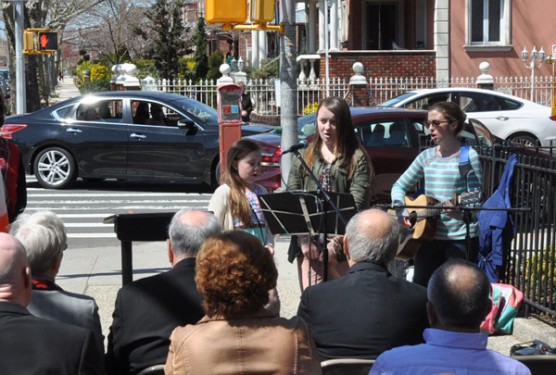 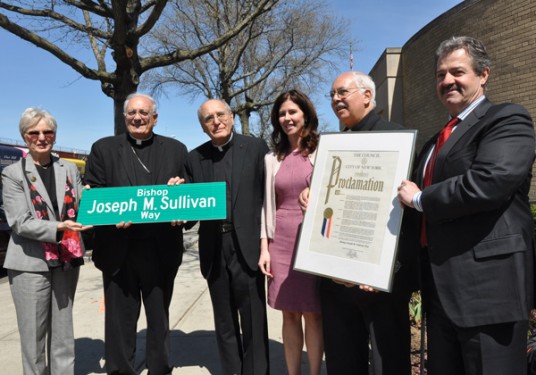 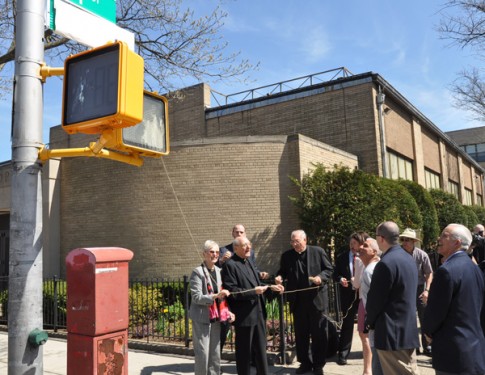 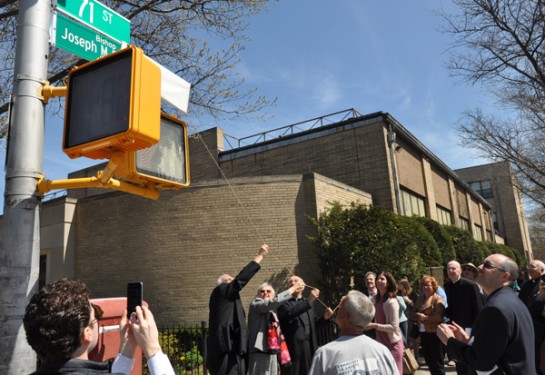 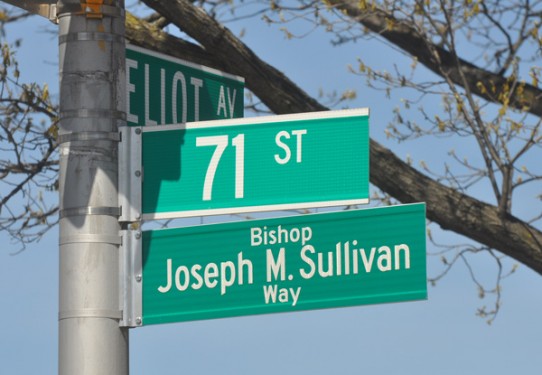 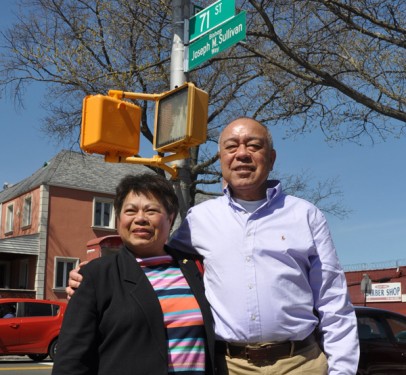 The ceremony included prayers, and songs, which would have been very much to the liking of Bishop Sullivan.

Some school children sang a chorus of “Amazing Grace,” followed by a rendition by pipers from the N.Y.C. Fire Dept. Former Charities workers and parishioners stood by and remembered.

The culmination was the unveiling of the street sign itself as Bishop DiMarzio, Fran Sullivan and the pastor, Father Michael Carrano, pulled away the white paper that covered the green plaque that bears his name at the intersection of Eliot Avenue and 71st Street.

One man stopped and remembered how he would attend the bishop’s Mass, but always called him “Father Sullivan.”

“He said he didn’t mind,” said the gentleman. “‘Call me however you know me,’ the bishop told me,” he recalled.

The Middle Village community remembered the late bishop as it knew him – a man close to the community, a man as familiar as the street you walk down. So, the people did what seemed appropriate. They co-named the street in his honor.