NEW YORK — Pope Francis has accepted the immediate resignation of Bishop Richard Malone of Buffalo, N.Y. on Wednesday morning. The announcement comes two months after the Vatican asked Bishop Nicholas DiMarzio to conduct a fact-finding mission into the Diocese of Buffalo, which has been roiled with claims that Bishop Malone has mishandled numerous abuse cases. The resignation was announced in Washington, D.C., by Archbishop Christophe Pierre, apostolic nuncio to the United States.

Archbishop Pierre also announced that Albany, N.Y, Bishop Edward Scharfenberger, a native of Brooklyn who grew up in Queens, has been named apostolic administrator of the Diocese of Buffalo until a permanent successor is named.

In a letter to the faithful after the announcement of his resignation, Bishop Malone said:

“Inevitably, some will surmise that my decision is the result of the recently-completed apostolic visitation, carried out by Bishop Nicholas DiMarzio at the behest of the Holy See. While I was made aware of the general conclusions of the report, which were a factor in my discernment, my decision to retire early was made freely and voluntarily. I have come to this decision with honest reflection and a deep and abiding commitment to doing what I believe is in the best interests of the Church throughout Western New York.”

Bishop DiMarzio made three trips to Buffalo in October for his visitation and interviewed more than 80 diocesan officials, clergy and laypeople in the diocese. He submitted a report to the Vatican at the beginning of November.

“It was conducted with urgency as the Holy See directed that this visitation be thorough with the foremost consideration being the good of the people of the Diocese of Buffalo,” Bishop DiMarzio said in a statement Wednesday morning.

“What I found are many deeply devoted Catholics who love their church…I pray this moment of suffering and pain will lead to a birth of new faith. With the appointment of the Most Reverend Edward Scharfenberger, bishop of Albany, to oversee the Buffalo Diocese, I am confident that Buffalo Catholics are in good hands.”

In a news conference on Wednesday, Bishop Scharfenberger said that he has known since the beginning of November that he was being considered for the role. “I received a call from the apostolic nuncio, Archbishop Pierre, that I was being considered as a possible appointee as apostolic administrator, and that he would take that to the Holy Father,” said Bishop Scharfenberger.

Bishop Scharfenberger, who was ordained as a priest of the Diocese of Brooklyn in 1973, said, “I am honored to serve as apostolic administrator of the Diocese of Buffalo during these challenging times, and I am humbled by the task put before me. I ask for your prayers as we begin this journey together, and I look forward to getting to know the people of this great diocese.”

A press release from the Diocese of Albany highlighted that “In his five and a half years as Bishop of Albany, Bishop Scharfenberger has been a national leader in responding to the clergy abuse crisis. He published a list of offenders in the diocese four years ago, was among the first bishops in the country to call for an independent lay-led investigation of the scandal involving former Cardinal Theodore McCarrick, revamped the diocesan review board, and established a predominantly lay task force on sexual abuse last year to make recommendations to the diocese on its response to survivors and its internal policies.”

In a video message published on the Diocese of Albany Facebook page, the Bishop Scharfenberger announced that his “family just got a little bit bigger,” and that he plans to visit the Diocese of Buffalo, which covers eight counties in western New York state, weekly. “I will be doing a lot of listening and learning,” he said.

Bishop Scharfenberger has led the Diocese of Albany since 2014. Before that, he was the pastor of St. Matthias Church in Ridgewood, Queens, for 11 years. He also served as judicial vicar for the Roman Catholic Diocese of Brooklyn from 1993 to 2002. Bishop Scharfenberger has a degree in Canon Law from the Catholic University of America, and a law degree from Fordham University. He was admitted to the New York State Bar in 1991.

Bishop Malone faced accusations that he knowingly covered up for priests credibly accused of abuse. One of those priests, retired Father Norbert F. Orsolits acknowledged in 2018 that he had molested “probably dozens” of teenage boys in the 1970s and 1980s. Those revelations sparked scrutiny of Bishop Malone. He resisted numerous calls from clergy, seminarians and lay leaders in the diocese to step down.

Last month, Bishop Malone was in Rome with fellow prelates from New York state for their regularly scheduled “ad limina” meetings with Pope Francis and the Roman curia. While he was in Rome, Bishop Malone was the principal celebrant of a Mass at the Basilica of Saint Paul’s Outside the Walls, where he quoted from Pope Francis’ catechesis on Christian hope, saying, “In these times that appear dark, in which we sometimes feel disoriented by the evil and violence that surround us, by the distress of so many of our brothers and sisters, we need hope.”

Following his return from Rome, Bishop Malone issued a statement, saying that Pope Francis is aware of the difficult situation that he and the diocese are facing.

“He was very understanding and kind,” Bishop Malone wrote, referring to a private conversation he had with the pope.

Last year, the Diocese of Buffalo attracted national attention when Bishop Malone’s former executive assistant, Siobhan O’Connor, leaked hundreds of pages of diocesan records allegedly showing that Bishop Malone had allowed accused priests to continue to minister and that he has actively engaged in a cover-up.

In September, Father Ryszard Biernat, Bishop Malone’s priest secretary, leaked secret recordings in which the bishop voiced concerns that one of those scandals could force him to resign.

Father Biernat himself faces allegations that he engaged in a longtime relationship with Matthew Bojanowski, a former diocesan seminarian. Despite the publication of correspondence between Father Biernat and Bojanowski that appears to be romantic in nature, Bishop Malone has said he has no reason to believe the relationship wasn’t platonic.

In an interview with a local Buffalo station earlier this year, Bishop Malone said the diocese is facing 138 abuse lawsuits since a “look back” window in New York state took effect in August that lifts the statute of limitations on abuse cases against a public institution for one year. He said his advisers estimate that 250 to 275 lawsuits will be filed and that the diocese is in “very serious discernment” over whether to file for bankruptcy.

Bishop Malone is now the third U.S. bishop to step down during the last year after abuse-related allegations were made. In the first two cases, the pope accepted their ordinary resignation, which they had previously submitted when they turned 75 years old. The first was Bishop Michael Bransfield of West Virginia, who is accused of both financial and sexual misconduct, and the second was Cardinal Donald Wuerl of Washington, who resigned after scrutiny of his handling of abuse cases while he was bishop of Pittsburgh in the 1980s. Bishop Malone is 73 and was not required to present his resignation until 2021.

Bishop Malone served as an auxiliary bishop in Boston under Cardinal Bernard Law from 2001 to 2004 and was then named bishop of Portland, Maine, a post he held until his appointment to Buffalo in 2012. 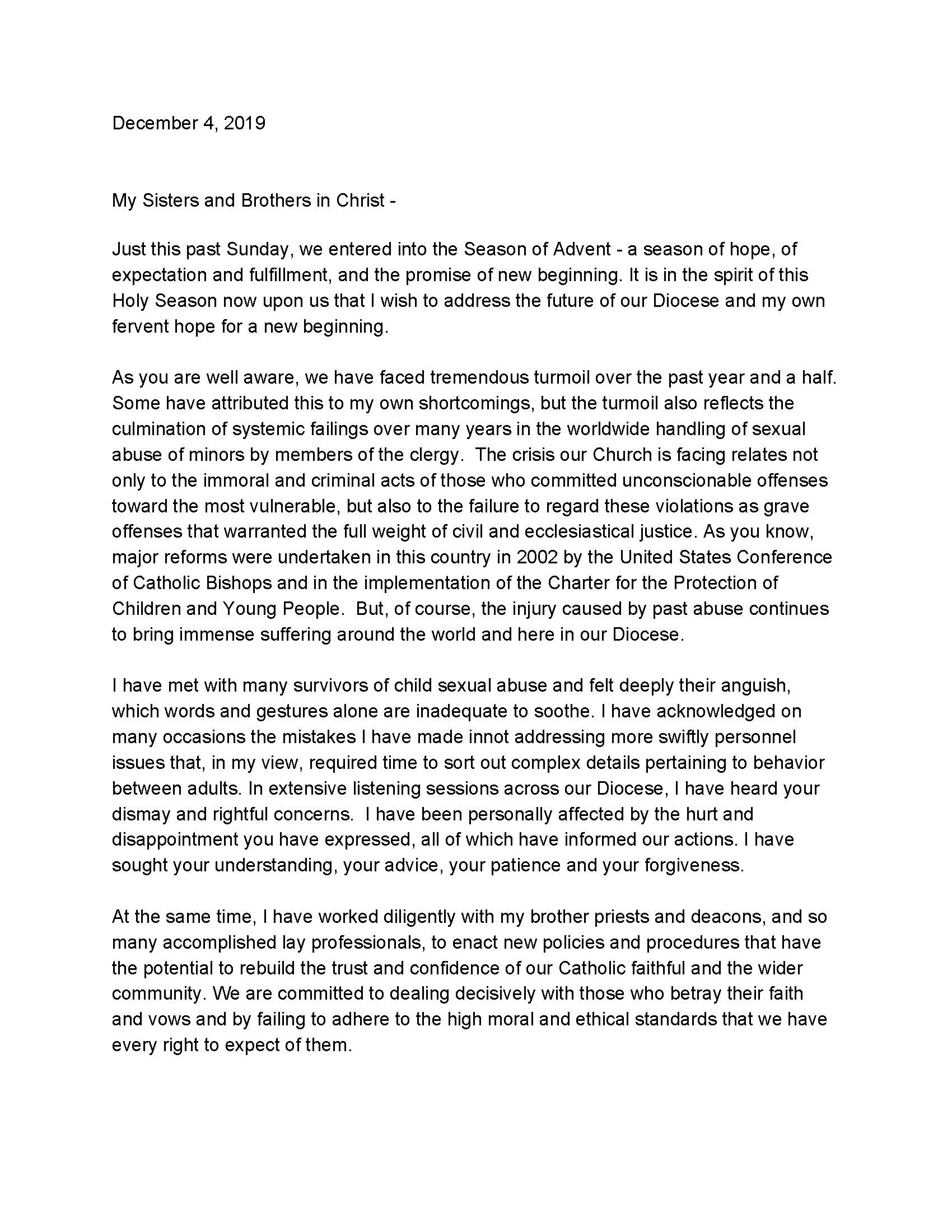 Click here to read Bishop DiMarzio’s statement on his Apostolic Visitation in Buffalo:

Click here to read a statement from the Diocese of Albany regarding Bishop Malone’s resignation: 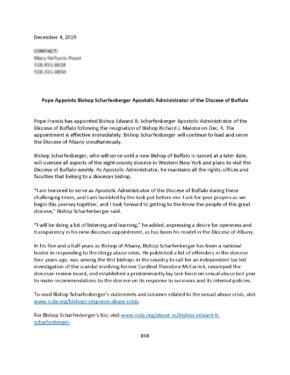