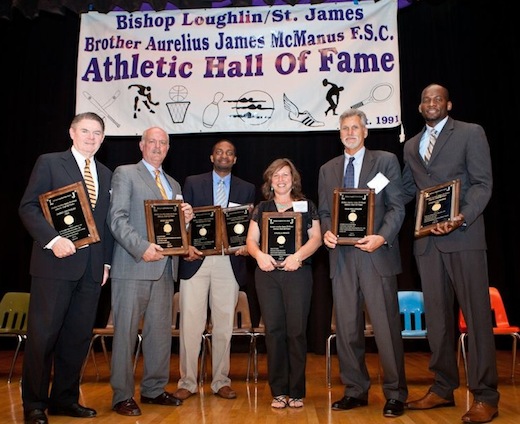 Below are this year’s inductees and photos from the ceremony:

Curtis Sumpter grew up in the Brownsville section of Brooklyn where he excelled as a youngster in basketball. During his senior year at Loughlin in 2002, he was the high scorer and M.V.P. of the CHSAA and was selected to every major newspaper’s All-City team.

That same year, he was nominated as a McDonald’s All-American and was awarded with the Nugent Brothers Award.

Sumpter went on to play at Villanova University on a full scholarship. He earned First Team All-Big East honors in 2007 and was the Comeback Player of the Year in the Big East for the 2006-2007 season.

After playing professional basketball overseas, he now is an assistant coach at Villanova with the title of director of student-athlete development. He currently resides in West Deptford, N.J. 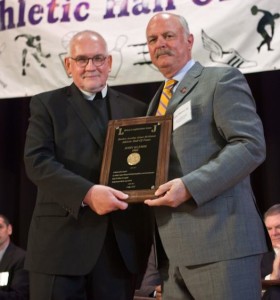 John Klemm arrived at Bishop Loughlin from St. Teresa of Avila parish, Prospect Heights. For the Lions, he ran track and played varsity baseball from 1964-1965.

After high school, Klemm joined the U.S. Marine Corps, serving from 1966-1969 including two tours in Vietnam. Upon completion of his service to his country, he received a Bachelor of Sciences degree from St. Francis College, Brooklyn Heights.

In 1997, Klemm became the first director of development at Bishop Loughlin – a position he still holds. He is responsible for hands-on fundraising for capital projects and the improvement of athletics facilities and equipment

He’s spearheaded the raising of over $25 million for Loughlin in addition to establishing the school’s Hall of Fame and Golf Open. He was also instrumental in the construction of the school’s new fitness center and the restoration of the outdoor track.

He lives in Marine Park with his wife Kathleen. They have three children and two grandchildren – with a third on the way. 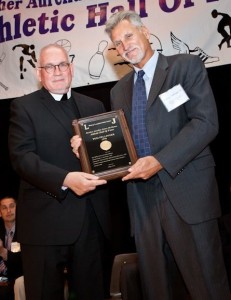 Coming from Our Lady of Grace parish, Howard Beach, Tom Pellinger swam under legendary coach Harry Benvenuto on one of the strongest teams in N.Y.C. He also played water polo for the Lions.

In water polo, he was nicknamed “Bucket Man” for his goal-scoring proficiency. Loughlin often played college teams because not many high schools had water polo teams. Pellinger once scored eight goals in a game against West Point during his senior year of 1970.

While at St. Francis College, he scored 13 goals in a single game against Villanova University. He received a Bachelor of Arts degree from St. Francis in 1974 and a Master’s degree from John Jay College in 1980.

He’s already a member of the Terriers’ Hall of Fame and spent 34 years as a major in the U.S. Park Police. He even won three swimming medals at the International Police Olympics in Sydney, Australia in 1988.

Pellinger resides in Alexandria, Va., with his wife Peggy. He has a daughter and two grandchildren. 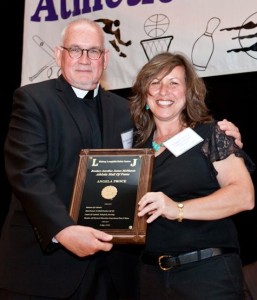 She’s coached volleyball and softball at the school and is now the Lions’ athletic director – the first female to hold that position.

Proce said she loves being around her students, who helped her get through a rough patch of her life. She was diagnosed with Stage-One breast cancer in September, 2010, but she still showed up to work with her energetic smile every single day.

“They (her students) are amazing,” Proce said. “I like that I am able to touch the lives of our students and athletes, love seeing them grow into men and women. I also love the faculty and staff. I love the family atmosphere at Loughlin. I love the Loughlin tradition and being a part of it.”

Proce’s “never-say-die” attitude has resonated with the entire school community, resulting in her induction into Loughlin’s Hall of Fame. 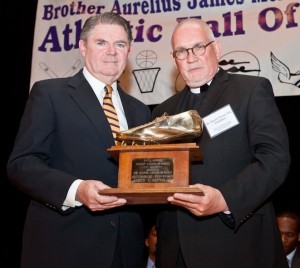 Jim Reynolds arrived at Loughlin from Our Lady of Fatima parish, Jackson Heights. IN 1963, he set the indoor mile record at 4:21 while winning the Cardinal Hayes H.S., the Bronx, Games Mile Run.

He was part of the relay team in January, 1963 that set the Millrose Games record for the Sprint Medley Relay trials. He also won the mile run in the CHSAA Brooklyn/Queens championships during both the indoor and outdoor seasons as a senior.

From there, Reynolds accepted a track scholarship to St. John’s University, Jamaica, where he was a freshman college All-American in the 5000-meter run in 1964.

He graduated St. John’s School of Law in 1971 and has been a partner in the law firm of Reynolds, Caronia, Gianelli and LaPinta in Hauppauge, L.I., since 1979.

He currently serves on Loughlin’s Board of Governors and resides in Rockville Centre, L.I. He will celebrate his 40th wedding anniversary next year with his wife Claire, with whom he has four children and three grandchildren. 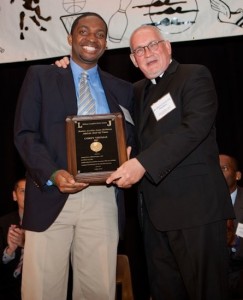 Corey Thomas came to Loughlin from the Flatbush section of Brooklyn and is one of the greatest middle distance runners in Lions’ track history. He set both the CHSAA and Armory records in the 800-meter (1:52) and 1,000-meter (2:28) runs.

During his senior year, he was the national indoor champion in the 1,000-meter run. He won six CHSAA city titles in his career and went on to Ohio Sate University on a full track scholarship. He was named a scholastic All-American in high school track in 2001.

Thomas finished his Bachelor’s degree in English literature at St. Francis College and is presently a teacher and head track coach at LaSalle Academy, Manhattan. He is also the site director with the N.Y.C. Parks Foundation’s Track and Field Youth Program.

He currently resides in Crown Heights.

Hailing from the Williamsburg section of Brooklyn, Mark Alvarez was a standout shortstop and pitcher for Lions’ baseball team for all four of his years at Loughlin.

He’ll always hold the distinction of once winning both games of a double-header in league playoffs while striking out 13 batters in each game.

“I could pitch another game; I’m a machine,” Alvarez told a local sports writer after the games.

He led the Lions in wins and batting average in 1991 and was voted the Private School Athletic Association’s Most Valuable Player in Baseball in addition to being named to numerous All-Star teams that year.

Carlyne Pradieu was a track standout for the Lions and came to Bishop Loughlin from St. Jerome’s parish, East Flatbush. She won five CHSAA intersectional city titles severing as the anchor runner and several individual championships during her time at Loughlin.

She also won the Bonilla Award given to a junior on the basis of scholarship and athletics and the Nugent Brothers Student-Athlete Award given to the most outstanding senior.

Pradieu received a full scholarship to run track at Tulane University, New Orleans, La., where she earned All-Conference USA honors eight times. She earned her Bachelor of Sciences degree in physiology and then her Master’s degree from the University of West Georgia in 2008.

She has been a teacher of health and physical education for eight years, coached track and field at Marist H.S., Atlanta, and is the department chairperson at Wesley International Academy, Atlanta.

She currently resides in Kennesaw, Ga., with her husband Jovan and 19-month-old daughter Audrey Jackson.