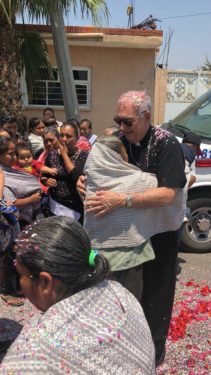 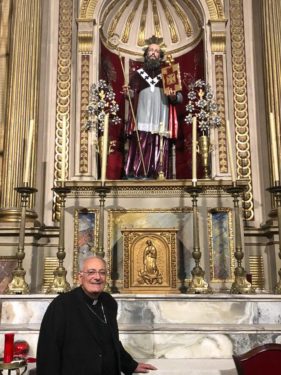 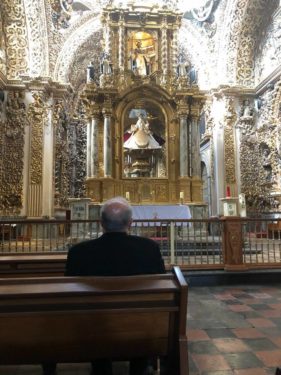 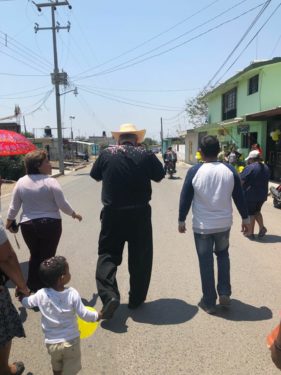 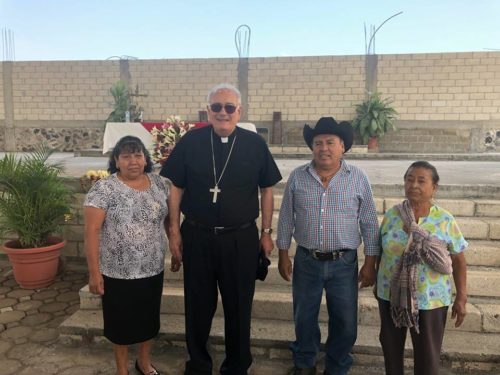 “¡A la bio, a la bao, a la bin bon ban!” was the chant as the people of Tlapanalá, a city in the state of Puebla, Mexico, received Bishop Nicholas DiMarzio with traditional Mexican cheers, flower petals and plenty of confetti when he visited the town on Tuesday, April 17.

“The idea for a trip to Mexico started two years ago,” says Father Jorge Ortiz-Garay, director of the ministry to Mexicans in the Brooklyn Diocese, who traveled with the bishop, “but a catastrophic event gave it a new urgency.”

On Sept. 19, 2017 a 7.1-magnitude earthquake struck Puebla. The epicenter was at San Felipe de Ayutla, just 14 miles south of Tlapanalá. Forty-six people died and more than 28,000 houses were affected – almost 6,000 of them totally destroyed.

Ten days after the earthquake, Bishop DiMarzio celebrated a Mass of Solidarity and Unity for Mexico at the Co-Cathedral of St. Joseph in Brooklyn. During the Mass, he announced the diocese would have a special collection to help the victims of the earthquake.

Last week, Bishop DiMarzio traveled to Mexico with Father Ortiz, who also serves as the administrator of St. Brigid’s parish, Bushwick, to get a first hand look at the situation in a diocese still recovering from the natural disaster. He brought a donation of $140,000 to help rebuild the Tlapanalá church and provide for other community needs.

Bishop DiMarzio arrived in Puebla, the capital of the state, Monday, April 16. One of the first places he visited was Immaculate Conception Cathedral, a magnificent colonial church built in the 1600s. There he met with Archbishop Víctor Sánchez, who thanked the bishop for the financial assistance, but also for his visit to the seat of the diocese and the towns of Tlapanaplá and Tejupa, which are among the areas most affected by the earthquake.

After visiting Tlapanalá at midday, Bishop DiMarzio traveled to Tejupa where he celebrated Mass at 3 p.m.

On Wednesday, April 18, Bishop DiMarzio and Father Ortiz traveled to Mexico City to visit the Basilica of Our Lady of Guadalupe, the center of the Catholic faith in Mexico.

After visiting the Basilica to pray in front of the original image of Our Lady of Guadalupe, the Bishop of Brooklyn visited the Our Lady of Guadalupe Hispanic Seminary, a house of formation for seminarians of Hispanic heritage who were born or now live in the United States. They are committed to returning to the U.S. upon completion of their studies.

The purpose of the seminary is to provide Spanish-speaking priests to the church in the U.S. Bishop DiMarzio celebrated Mass for the seminarians at the end of his visit.

The trip was a reminder that many people in Mexico still live with the consequences of the earthquake of 2017.