“I’m very disappointed the State Legislature sought fit to legalize marijuana in the state of New York,” the bishop said.

The New York State Legislature voted to approve the legalization of recreational marijuana on March 30. Gov. Andrew Cuomo signed the bill on March 31.

“This is not a good thing for our society,” Bishop DiMarzio said.

Medical marijuana, which is meant to be used by patients only when prescribed by doctors, has been legal in New York since 2014. New York is one of 35 states where medical marijuana is permitted.

Currently, there are 15 states where recreational marijuana is legal.

In November, New Jersey residents overwhelmingly approved an amendment to that state’s Constitution that would open the door to legalizing recreational pot. Last month, Gov. Phil Murphy signed a bill into law that had been approved by that state’s legislature.

The New York State Legislature’s vote came after a deal was struck between Cuomo and lawmakers to allow anyone 21 or older to smoke marijuana. Under the deal, business owners would be able to apply for permits to operate lounges or “consumption sites,” where marijuana would be dispensed, although the same lounges would be prohibited from serving alcohol.

New Yorkers would be permitted to grow their own pot plants — up to six plants per person.

The bishop said he is concerned about marijuana’s health hazards. “Marijuana has the same carcinogens that cigarettes do. Clearly, the effect is that it’s not good for your health.” he said.

It also goes against the wishes of the Catholic Church, he said. “The church says we should not endanger our health and our lives,” he said.

Bishop DiMarzio, who has carefully studied the issue and has written about it in “Put Out Into the Deep,” his column in The Tablet, cited scientific evidence in his argument.

In a 2018 column titled “Marijuana is Very Dangerous,” he pointed to a study by the Colorado Department of Public Health and Environment that included statements from a health advisory committee about the hazards of smoking marijuana at a young age. Colorado legalized recreational marijuana in 2012.

Marijuana use by adolescents and young adults has been linked to impaired learning and memory, the study found. Young people who smoke pot frequently are less likely to graduate from high school.

“Even the science doesn’t agree with it,” Bishop DiMarzio said.

While the New York law would prohibit marijuana for people under the age of 21, those under 21 are bound to indulge, according to the bishop. “Young people will start to use it,” he said, adding that young people “think they’re invincible.”

Dennis Poust, interim executive director of the New York State Catholic Conference, issued a statement Tuesday night, charging that marijuana is a “gateway drug” that could lead people to experiment with other drugs.

“The impact of today’s ultra-potent marijuana on developing brains is unclear. What is clear is that marijuana is a gateway drug that will have detrimental effects on untold numbers of young people and compound the current health crises of teen vaping and drug use, and will result in higher incidence of impaired driving and operation of machinery by adults,” he said.

To legalize marijuana at a time when New York, like the rest of the nation, is still fighting the COVID-19 pandemic is the wrong move, according to Poust.

“Furthermore, to legalize recreational use of a substance designed to be inhaled deeply and held in the lungs is never a good idea, but at this particular moment in history when we are suffering from a horrific pandemic involving a novel virus that attacks the lungs, it is the height of irresponsibility,” he said.

The legalization of recreational marijuana is expected to generate an estimated $350 million a year in tax revenue.

Lawmakers who pushed for legalization said they were doing so partly because the war on drugs disproportionately affected minority communities. People in those communities were arrested in larger numbers than white people for possessing small amounts of marijuana.

Bishop DiMarzio said he is aware of charges of unfairness in the war on drugs. “That’s a separate issue that has to be dealt with. Legalizing marijuana is not the way to do it,” he said.

The legislation was unanimously opposed by the Republican minority conferences in both houses, but several Democrats also voted against it. 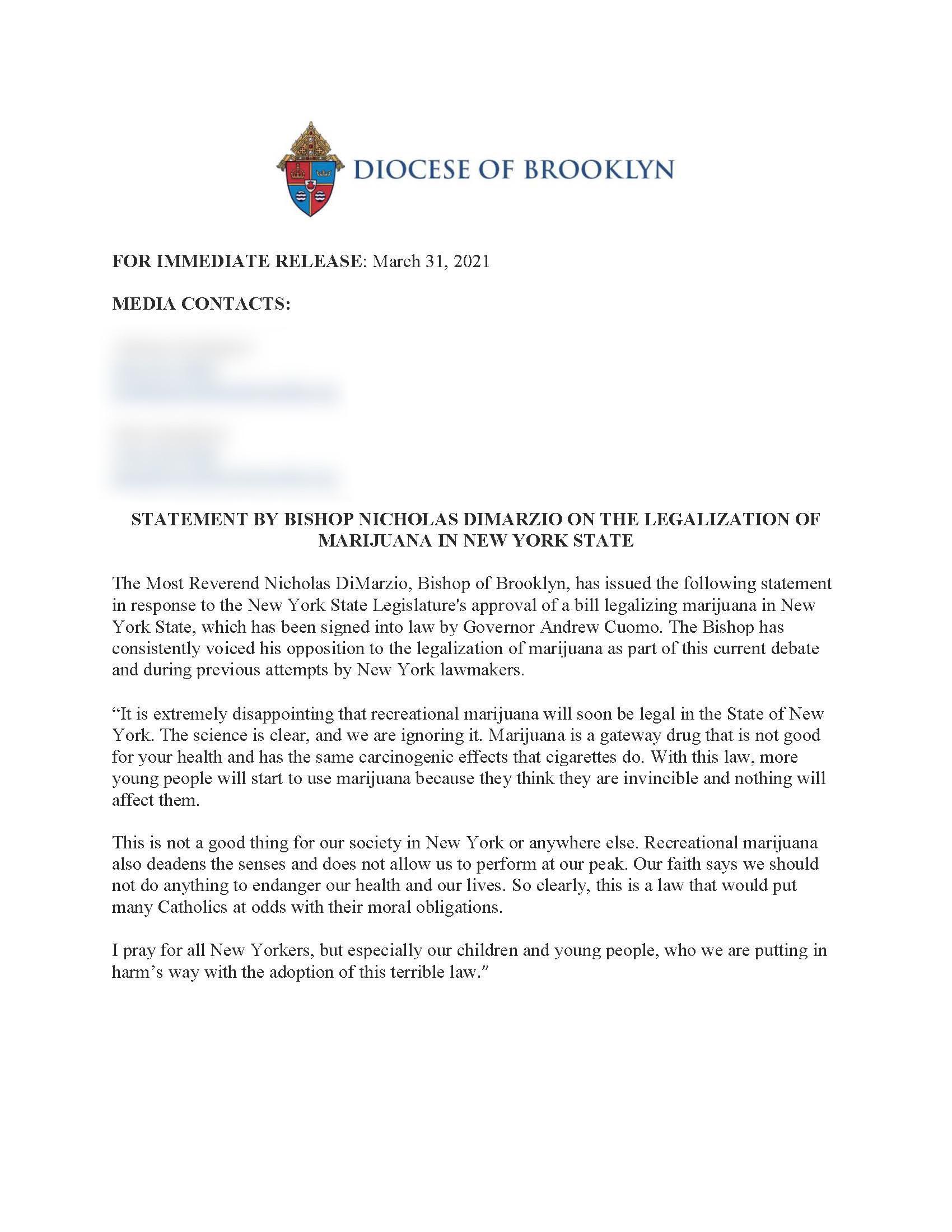