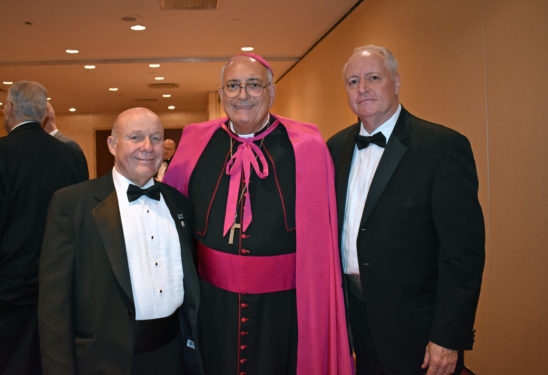 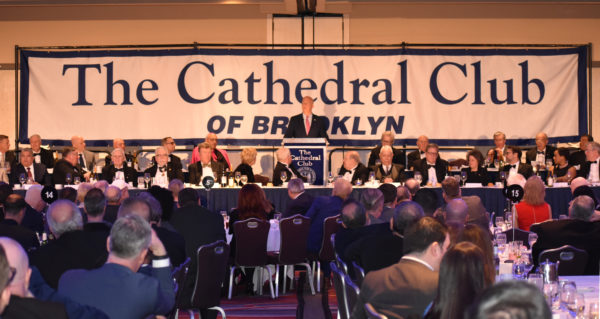 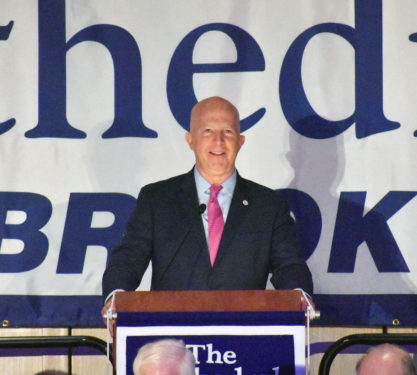 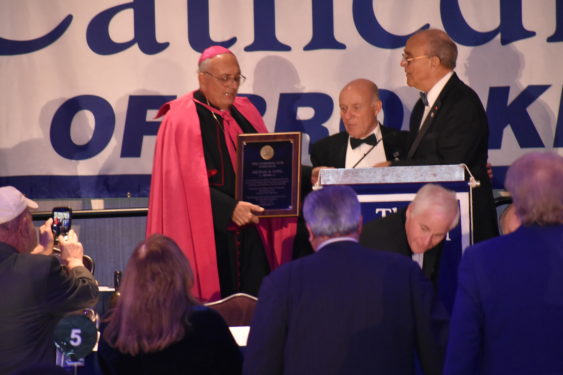 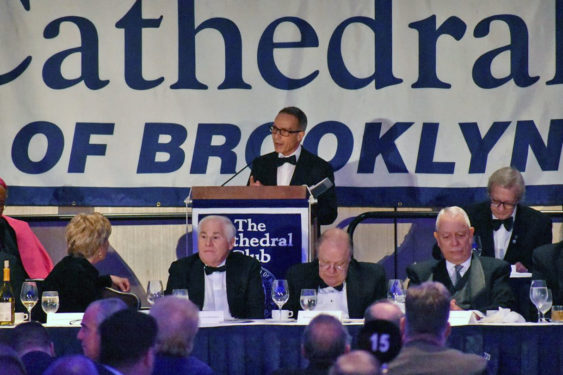 Citing the Reproductive Health Act that was recently passed in New York State, Bishop Nicholas DiMarzio decried the fact that it makes New York “the abortion capital of the United States.”

“Unfortunately, the malicious Reproductive Health Act does nothing to protect the lives of women in the State,” said Bishop DiMarzio.  “It is essentially dishonest to call this a pro-choice bill.  Rather it is an extremist pro-abortion piece of legislation.

“What it does is allow the termination of pregnancy in the final days, even the moments before, a woman gives birth.”

The bishop was speaking Feb. 7 to the 119th annual dinner of the Cathedral Club of Brooklyn held at the Marriott Marquis in Manhattan’s Times Square. Over 400 people attended.

Bishop DiMarzio said he had received hundreds of emails asking him to excommunicate Gov. Andrew Cuomo and members of the State Legislature who supported the bill. While many in the audience applauded that idea, the bishop said, “I will not excommunicate anyone.”

But he wondered if they haven’t already excommunicated themselves because “they have walked away from the teaching of the Church, which is their Mother, and also away from common sense.”

“I want our leaders to find their ways back to right and reasonable morality. So, we pray for them. We do not hate them.

“The best punishment they could have is to be voted out of office. That’s the ultimate therapy for a politician.”

Calling the new law “infanticide,” he said, “We must believe in human life and we must protect it in all its stages. This is what we must do as civilized people.”

He warned that “Our Governor and State Legislature are not finished… The proposed Assisted Suicide legislation is not helpful. It is just as bad as the Reproductive Health Act.”

The politicians in New York “are not so much concerned about the merits of policy but more with the political opportunities that it represents.”

“We need the power of the ballot box to change the situation,” said Bishop DiMarzio. He urged that Catholics vote for candidates who support their moral values and he asked that more committed Catholics run for office.

Bishop DiMarzio said that it is unfortunate that Gov. Cuomo, who received a Catholic school education, “seems to be able to say that his faith should not determine how he governs.”

He pointed out that the Church is losing many of its friends in politics.  He cited Michael Long, who is stepping down as Chairman of the NYS Conservative Party after 30 years; State Sen. Marty Golden, who was recently defeated by Democrat Andrew Gounardes; and the late Charles “Joe” Hynes, the former Kings County District Attorney who died last month.

Both Long and Golden were present at the dinner. Gounardes was disinvited after his co-sponsorship of the abortion legislation.

Bishop DiMarzio praised the five politicians in Brooklyn and Queens who voted against the abortion legislation, risking their own political futures: State Senators Joseph Addabbo and Simcha Felder, and Assembly members Nicole Malliotakis, who was present at the dinner, William Colton and Simcha Eichenstein.

Proceeds from the dinner went to the Cathedral Club’s scholarship fund that supports students in Catholic schools. Members of the dais recalled their own Catholic education as they spoke.

NYC Police Commissioner James O’Neill, the evening’s guest speaker, said that he was indebted to the foundations he received at Holy Cross School in Flatbush, which he attended for his first six years of elementary education before moving to New Jersey. Born in Brooklyn, he was baptized at Good Shepherd Church in Marine Park.

Commissioner O’Neill said that Holy Cross made such an impression on him that he could still recite the names of all his teachers.

“I have such fond memories of that school,” the police commissioner said. “It set the trajectory for me and my six brothers and sisters. It was a reinforcement of what my parents taught us – that you do your best because it’s not all about you. It’s about making the world a better place.

“Going to that school really reinforced the idea that as you’re going through life, you do your best and you take care of everyone you come in contact with.”

Understand the Meaning of Community

The commissioner, who is known for developing community policing said that “growing up in a parish, I understand what the meaning of community is.”

He credited the hard work and sacrifice of the NYPD and their law enforcement partners for the drop in crime in recent years.

“It’s such an honor being Commissioner because I get to see the great work and the sacrifice that the men and women on this job make every day of the week.  Seven days a week, 24 hours a day, they’re out there.

“They do it because they want to make difference.  They want to do good.”

The evening’s guest of honor, Domenick A. Cama, also credited his success in the business world with his Brooklyn upbringing.  Now the president and chief operating officer of Investors  Bancorp and Investors Bank, Cama grew up in Carroll Gardens and Bensonhurst.

“I’m the product of a Brooklyn working class family,” explained Cama.  “My parents, immigrants from Bari, Italy, came to the United States in search of a better life and they settled in Brooklyn. They came with very little material means but they led rich lives  because they had their Catholic faith and their family.

“My parents sacrificed so that we could have a Catholic education.  In fact, they offered me no choice but to attend Our Lady of Guadalupe School and Bishop Ford H.S.

“Much of who I am can be attributed to my upbringing in that close-knit Catholic Italian family.

“As I learned, a good Catholic education prepares young minds for a life of compassion and service and without it, we run the risk of not benefitting from one of our most valuable resources, that is our youth. A Catholic education is not an ordinary education because it doesn’t stop with academics. Catholic education instills the values and knowledge to guide students throughout their entire lives.”

Cama praised the work of the Cathedral Club’s scholarship program as a “game changer for hundreds of students who have benefitted from the precious gift of a Catholic education.”

A special surprise presentation was made to Club member Michael Long, who recently announced his retirement as chairman of the New York Conservative Party. He promised to continue actively supporting the values of conservatism and said he would remain as chairman of Holy Angels Catholic Academy, Bay Ridge.

Club president, Brian Long, CEO of Long and DeLosa Construction Co., explained that five high schools in Brooklyn and Queens share in the scholarship fund on a rotating basis.