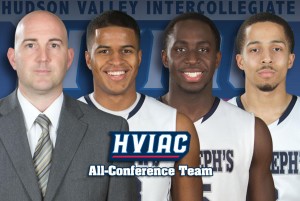 Louison receives All-Conference honors for the third consecutive year and was a constant force for St. Joseph’s all season, averaging a career- and team-high 18.3 points per game (No. 2 in HVIAC) and also secured 9.8 rebounds per game (No. 4 in HVIAC). The five-time HVIAC Player of the Week and one-time USCAA Player of the Week finished the season with 16 double-doubles (No. 6 in Division III) and shot an impressive 54.4 percent from the floor (No. 3 in HVIAC) on the season. Louison also became the first Bear to receive Team of the Week honors from d3hoops.com.

The six-time AD3I Player of the Week led the Bears in scoring and rebounding 13 times apiece and had 25 games of 10 or more points on the season, including ten 20-plus point games and two 30-point contests. The junior led the conference with 210 made field goals and 495 points on the season. Louison saved his best game of the season for reaching a career milestone, scoring 30 points on 12-of-16 shooting to secure his 1,000th career point in St. Joseph’s win over Brooklyn College on January 13th. The forward capped off his junior season with a 25-point, 17-rebound effort against Vaughn College in the HVIAC Tournament championship game to help the Bears secure the title.

Maddox earns All-Conference recognition for the first time in his career. The junior was the orchestrator of the Bears offense all season, leading the conference with 4.6 assists per game and 125 total assists. The guard also was able to score for St. Joseph’s, averaging a career-high 10.0 points per game and produced a 2.0 assist-to-turnover ratio (No. 2 in HVIAC).

Maddox had 12 games with 10 or more points and had 13 contests with five or more assists. The junior also led the team in assists in 20 of the Bears 27 games on the season. The guard saved one of the best games of his career for the most important game of the season against Vaughn College in the HVIAC Tournament title game, pouring in a career-high 19 points on 6-of-11 shooting and dished out a game-high five assists as St. Joseph’s defeated the Warriors 92-76.

Megafu receives the All-Conference accolade for the second straight season. The two-time USCAA and HVIAC Player of the Week provided the Bears with a double-double threat each time he touched the floor as he finished with a team-high 17 (No. 3 in Division III) on the season. The three-time AD3I Player of the Week averaged a career-high 17.0 points per game (No. 3 in HVIAC) and corralled a team-high 10.5 boards per game (No. 3 in HVIAC). The sophomore led St. Joseph’s in scoring nine times and rebounding a team-high 17 times.

Megafu finished second in the conference with 172 made field goals and a 56.4 field goal percentage. The sophomore led the league with 283 total rebounds and finished third with 40 blocks. The forward was a key contributor in St. Joseph’s wins this season, averaging 18.7 points on 61.8 percent shooting and 10.2 rebounds per game. Megafu also had a streak of eight straight double-doubles midway through the season which was tied for the third longest in the nation at the time.

After leading the team to an 18-9 record, head coach Joseph Cocozello has been named the HVIAC Coach of the Year for the sixth time in his career. The 18 wins are the most for a Bears team since the 2006-07 and he has led the Bears to nine-straight HVIAC championship games.

McNamee concludes her career with her third All-Conference nod. The senior averaged a career- and team-high 13.0 points per game (No. 10 in HVIAC) on 34.0 percent shooting from beyond the arc (No. 2 in HVIAC) and 90.6 percent shooting at the charity stripe. The guard also added 3.2 rebounds and 2.5 assists per game to her stat line. The one-time AD3I Player of the Week and Student-Athlete of the Month finished with 18 games of 10 or more points and led the Lady Bears in scoring 11 times.

McNamee capped off her senior season with 15.6 points per game, the most of any month this season, and averaged 3.3 boards, 2.3 assists and 1.3 steals per game in the month of February. The guard had a career day in one of St. Joseph’s biggest games of the season, scoring a career-high 23 points, including her 900th career point, against Berkeley College in the HVIAC Tournament semifinals.

Moran is named to the All-Conference Team for the first time in her career after stepping up for St. Joseph’s in her final season wearing a Lady Bears uniform. The senior averaged a career-high 11.8 points per game (No. 12 in HVIAC) on 44.0 percent shooting (No. 3 in HVIAC) along with 7.3 caroms per game (No. 13 in HVIAC). The forward was a constant force in the St. Joseph’s lineup, playing and starting in all 26 games on the season.

The two-time USCAA Player of the Week had 16 games on the season with double-digit points, including 13 of the last 14 games to conclude the season. Moran also had three double-doubles on the season, doubling her total from her first three years combined, and led the team in scoring 10 times. The one-time AD3I Player of the Week had her best month of the season in January, averaging 14.4 points per game on 50.6 percent shooting.

Raccuglia takes home All-Conference honors for the first time in her career following a season that saw her do a little bit of everything for St. Joseph’s. The junior averaged a career-high 11.2 points (No. 15 in HVIAC) and 7.4 rebounds per game (No. 12 in HVIAC) along with a team-high 3.0 assists (No. 6 in HVIAC) and 2.5 blocks per game (No. 2 in HVIAC). The forward scored in double figures 16 times, had five games with 10 or more rebounds, had six games with five or more assists and four games with five or more blocks.

The one-time USCAA Player of the Week had four double-doubles on the season and became the second Lady Bear ever to reach 100 blocks with two against York College on February 5th. Raccuglia used her best game of the season to help St. Joseph’s beat their archrivals St. Joseph’s (L.I.) on December 21st. The two-time AD3I and one-time HVIAC Player of the Week finished with 15 points and a career-high 19 rebounds along with six assists and five blocks against the Golden Eagles.