Blessed Pier Giorgio Frassati, a Catholic social activist and a member from the Third Order of Saint Dominic, once said that “to live without faith, without a heritage to defend, without battling constantly for truth, is not to live, but to ‘get along.’ We must never just ‘get along.’ ”

I did, however, try to get along with protestors one recent Saturday morning, when, after celebrating the 8 a.m. Mass at St. Paul Church in Cobble Hill, I was accosted, alongside two Capuchin Franciscan priests (one of whom being stalwart Father Fidelis Mosconski, CFR), as well as Father Eamon Murray of Visitation of the Blessed Virgin Mary Parish, as we walked to a nearby abortion facility to peacefully pray the holy rosary, where we joined several laypeople, including three of my parishioners.

Protestors came up against us, blocking us from walking and invading our personal space. We were mocked, cursed at, and were subject to hate speech. Ultimately, we were only able to reach our destination further down on Court Street with the intervention of the NYPD, who formed a human barricade in front of us.

Throughout the hour-long walk that normally would have taken mere minutes, I tried engaging these people in conversation that would uplift them and would eventually, at some future point, lead them to receive healing and feel God’s embrace in their very apparent brokenness. I offered to spend individual time with them.  Even though I was met with scorn, I hope I made a dent in some small way.  One never knows.

The message of Blessed Pier Giorgio Frassati nevertheless rings true when I think about the extent of the scorn that can be directed at ardent, peaceful anti-abortion advocates who just want to save lives and point people, like Jesus did, to a better way. Peaceful soldiers, armed with prayer and love, who want to affirm that the violence of abortion just begets more violence, as we saw that day, and as we see across our wounded city and nation.

Gun violence, gang violence, violence against elderly people, and so recently, violence against Asian-Americans — it really just proves that if we allow the throw-away culture to flourish, we are spinning our wheels in our fight to rid society of all violence and injustice.  We are contradicting ourselves. We are deceiving our children.

We Christian soldiers must faithfully come out every second Saturday of the month to St. Paul Church and then prayerfully proceed to the abortion facility on Court Street to save lives, to stop the violence, and most importantly, to defend our heritage — which is nothing less than the Truth of Jesus Christ, and the Gospel of Life, in this weary world where so many individuals are confused, broken, and sadly, deceived.

And let’s continue to pray for a world in which women never, ever, have to turn to this awful alternative, where abortion will never be viewed as a “good” to address the root problems underlying unwanted pregnancies. 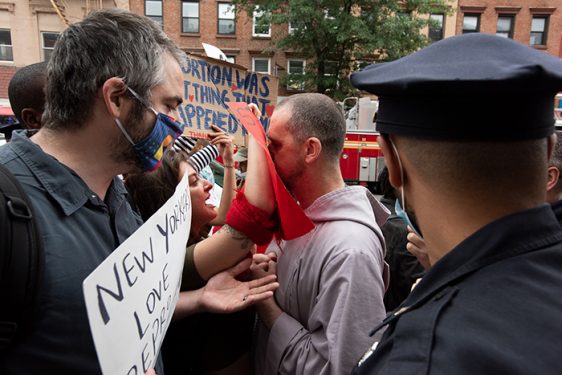