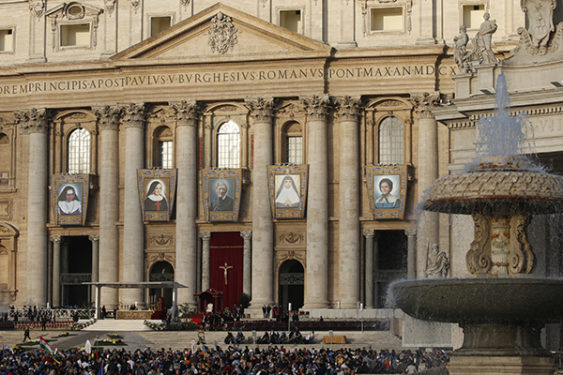 Banners showing five new saints are pictured on the facade of St. Peter's Basilica before a canonization Mass celebrated by Pope Francis in St. Peter's Square at the Vatican Oct. 13, 2019. (Photo: CNS/Paul Haring) 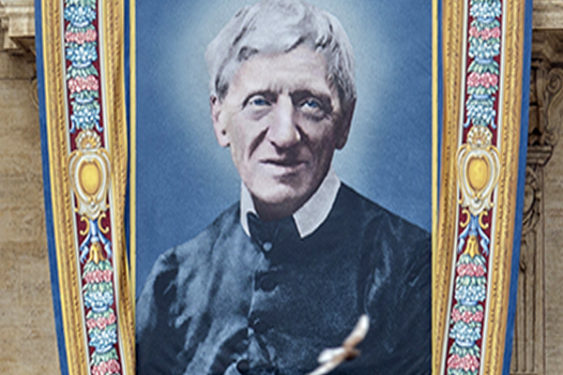 A banner of Blessed John Henry Newman hangs on the facade of St. Peter's Basilica at the Vatican Oct. 10, 2019. (Photo: CNS/Junno Arocho Esteves) 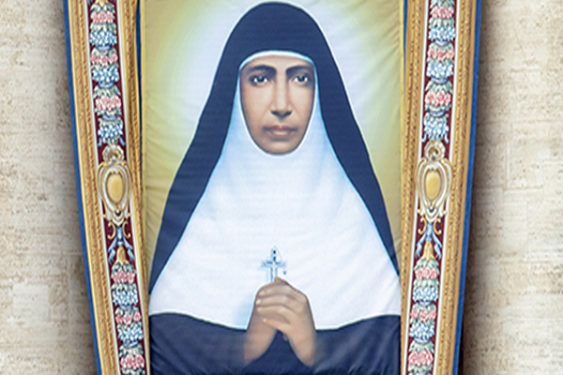 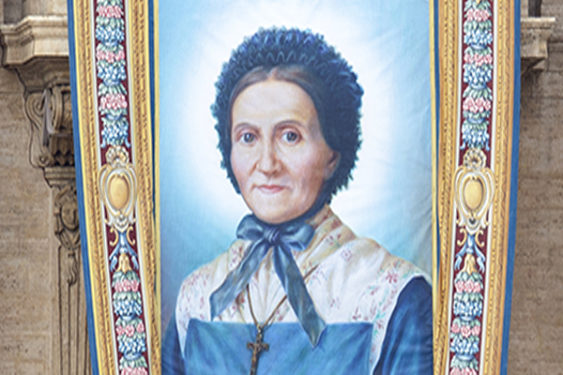 A banner of Blessed Marguerite Bays hangs on the facade of St. Peter's Basilica at the Vatican Oct. 10, 2019. (Photo: CNS/Junno Arocho Esteves) 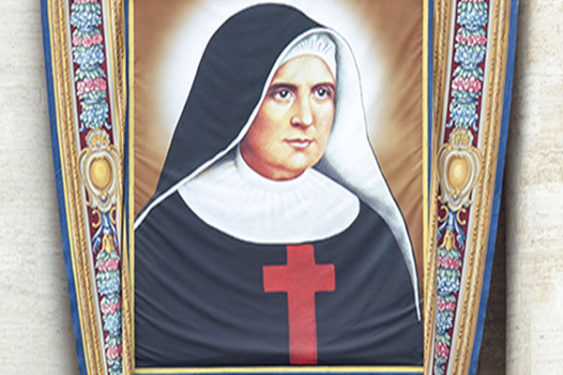 A banner of Blessed Giuseppina Vannini hangs on the facade of St. Peter's Basilica at the Vatican Oct. 10, 2019. (Photo: CNS/Junno Arocho Esteves) 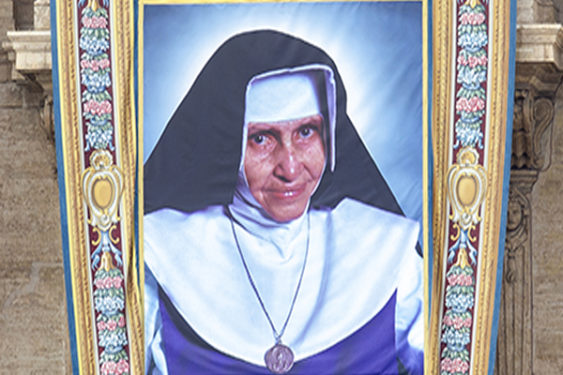 A banner of Blessed Maria Rita Lopes Pontes, known to Catholics around Brazil as Sister Dulce, hangs on the facade of St. Peter's Basilica at the Vatican Oct. 10, 2019. (Photo: CNS/Junno Arocho Esteves)

VATICAN CITY (Catholic News Service) – The Vatican hung banners of the Catholic Church’s newly canonized saints four days before the Mass that officially recognized they are in heaven with God.

While the hanging of the banners Oct. 10 did not coincide with the Mass, it did coincide with the kickoff of exhibits, conferences, prayer vigils and other celebrations focused on the new saints from Brazil, England, India, Italy and Switzerland.

For the dozens of Brazilians at the Synod of Bishops for the Amazon, most of the attention was on St. Maria Rita Lopes Pontes, popularly known as Sister Dulce.

Born in 1914, she was a member of the Missionary Sisters of the Immaculate Conception and founded the first Catholic workers’ organization in the state of Bahia, started a health clinic for poor workers and opened a school for working families. She created a hospital, an orphanage and care centers for the elderly and disabled and became known as “the mother of the poor.”

St. John Paul II, who called her work “an example for humanity,” met her in 1980 during his first trip to Brazil and, returning in 1991, he visited her in the hospital. She died in 1992 at the age of 77 with tens of thousands attending her funeral and even more gathering for her beatification in 2011.

Among English-speakers, though, most of the attention was on St. John Henry Newman, the theologian, poet and cardinal who lived from 1801 to 1890.

Sally Axworthy, British ambassador to the Holy See, led the inauguration Oct. 10 of an exhibit about the four visits St. John Newman made to Rome: first as an Anglican, then as a Catholic seminarian, later as founder of the first communities in England of the Congregation of the Oratory of St. Philip Neri, and finally, when he came to be made a cardinal in 1879.

The canonization was causing a lot of excitement in England, she said, and Prince Charles planned to travel to the Vatican for the Mass Oct. 13.

“Cardinal Newman was really a very important figure. He was a giant of the 19th century,” Axworthy said.

“The first half of his life he was Anglican, and he was a major figure in the Anglican Church,” influencing the church to draw more deeply from its Catholic roots and from the early Christian theologians, Axworthy said. “He defined Anglicanism as a middle way between Catholicism and Protestantism.”

Once he joined the Catholic Church, she said, “he had a similarly great impact” on this new community, “particularly with his ideas on the development of doctrine, which I understand opened the way to Vatican II, and also his ideas about conscience, about conscience being the voice of God in every one of us.”

Cardinal Newman already is honored as a saint on the Anglican calendar — on Aug. 11, the day of his death. His feast day on the Catholic calendar is Oct. 9, the date he joined the Catholic Church at the age of 44.

In London on the eve of Cardinal Newman’s beatification in 2010, Pope Benedict XVI said the cardinal had been an “important influence” in his own life and thought.

At the beatification Mass the next day in Birmingham, England, Pope Benedict paid special tribute to the future saint’s vision of education, which combined intellectual training, moral discipline and religious commitment.

He quoted the theologian’s appeal for a well-instructed laity and said it should serve as a goal for catechists today: “I want a laity not arrogant, not rash in speech, not disputatious, but men who know their religion, who enter into it, who know just where they stand, who know what they hold and what they do not, who know their creed so well that they can give an account of it.”

The three others canonized Oct. 13 were:

— St. Marguerite Bays, a laywoman from Switzerland known for her service to the poor, her simplicity of life and her devoted faith in the face of great physical suffering. St. Bays also was known as a mystic and for bearing the stigmata of Christ. She died in 1879 at the age of 63.

St. John Paul II beatified her in 1995, lauding her as an example for all lay Catholics. “She was a very simple woman with a very normal life,” he had said. “She did not accomplish anything extraordinary, yet her existence was a long and silent progression on the path toward holiness.”

— St. Josephine Vannini, an Italian who co-founded the Daughters of St. Camillus, adding to the usual vows — poverty, chastity and obedience — a fourth, which is to serve the sick, even if it means risking death.

Born in 1859, she was orphaned at a young age and was sent to live with the Daughters of Charity, an order she later applied to join. After leaving the novitiate because of illness, though, she was not readmitted. She and her spiritual director, Blessed Luigi Tezza, founded the Daughters of St. Camillus. She died in 1911.

— St. Mariam Thresia Chiramel Mankidiyan, the Indian founder of the Congregation of the Holy Family, a religious order dedicated to helping couples and families and serving the poor, the sick and the dying. Born in 1876 to a well-off farming family, she insisted on living a life of austerity, sleeping on the gravel floor instead of a bed, for instance.

When she received the stigmata in 1909, her bishop ordered that an exorcism be performed. But she continued with her prayer life and serving local families.

Under direction of the local bishop in 1913, her spiritual director set up a “house of solitude” where St. Thresia could go to pray. Three friends joined her in the house, and in 1914, she received canonical permission to launch the Congregation of the Holy Family. She died in 1926.