United by the Holy Rosary, Knights of Columbus in the diocese and around the state raised their hearts and voices in prayer for the domestic church earlier this month.

The New York State Council of the Knights, in cooperation with the state bishops, invited all eight dioceses to join in the first statewide Marian Hour on Thursday, May 3 at 7:30 p.m. to pray for a strengthening of families. The date was chosen to coincide with the national day of prayer in the U.S.

Bishop Nicholas DiMarzio, state chaplain, led the holy hour and recitation of the rosary for more than 50 Knights from Brooklyn and Queens at the Cathedral-Basilica of St. James, Downtown Brooklyn. 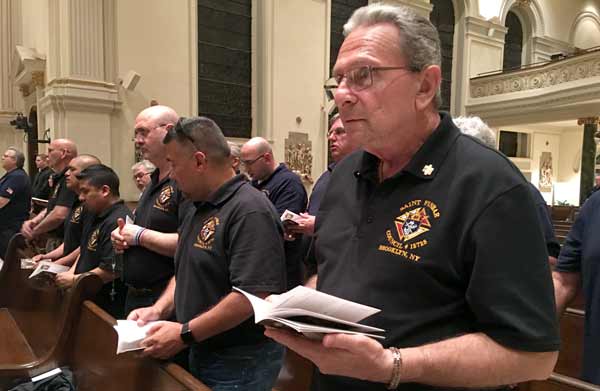 “We come tonight to pray for all the families of this diocese,” the bishop said, addressing the group, which included more than a dozen squires from St. Finbar Council No. 15728 in Bath Beach.

“As we gather under the protection of the Holy Family, let us beseech God, the Father of every family, to open our hearts to a deeper experience of His love,” the bishop said.

The evening service included Scripture readings, exposition of the Blessed Sacrament and the litany of the Holy Family, as well as related teachings from Pope St. John Paul II.

The Knights of Columbus has been sponsoring rosary-based programs of Marian prayer since 1979. To date, more than 17 million people have assembled for 147,000 prayer services held at local councils and parishes.

“It’s very important that people understand that the Knights of Columbus is a family organization,” said Kenneth F. Latham Jr., state deputy. “What better way (to convey that) than to come together to pray for the family?”

A framed image of the Holy Family, blessed by Pope Francis, used order-wide by the Knights of Columbus since 2015, was placed on the altar by a fourth-degree color guard at the opening of the service and was an appropriate focal point during the bishop’s homily.

“In our world today, the unity of the family is in need of defense,” the bishop said. “We see it in the destruction of family life.” 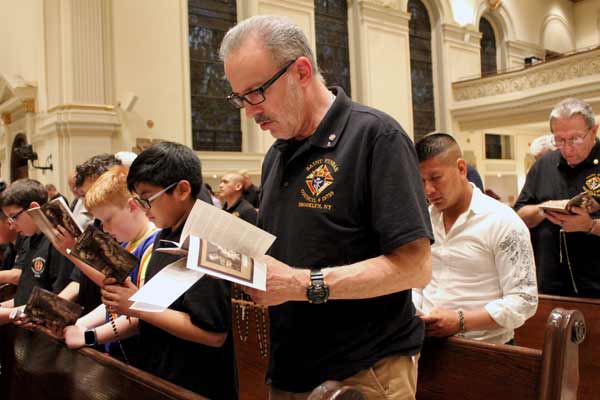 Evidence of that destruction, he offered, is seen in the practices of cohabitation, marital separation and divorce, and civil unions in lieu of sacramental ones.

Bishop DiMarzio told Knights that the witness they give to marriage and family life is vital, not only in society, but also in their own homes.

“Every human family, every Christian family especially, takes its cue from the Holy Family,” whose members share a unique and unrepeatable union, he said.

“That union is something that every human family strives to achieve. They can mirror it. They can become as the Holy Family when Christ is at the center.”

In his homily, the bishop referenced the teachings of St. John Paul II in “Familiaris Consortio,” an apostolic exhortation on the family’s role in the world, and “Redemptoris Custos” on St. Joseph’s mission in the life of Christ and the Church.

“As Knights, we are especially asked to imitate the life of Joseph, protector of Jesus and Mary,” he said.  “Knights of Columbus are called to be protectors of the Church … to make sure the Church can act with freedom to bring the Good News to the world.”

A commitment to prayer is key to bringing about God’s will in the world, the bishop told the men, and reminded them that the rosary is a powerful prayer because it centers on Christ and honors His Blessed Mother. 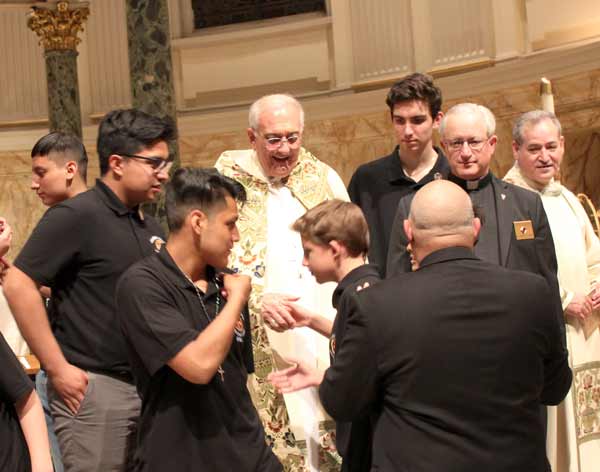 After a soft opening this year, both the bishop and Father Gelfant expressed the hope that the Marian Hour would grow and become an annual event.

Father Gelfant was grateful for all those who did turnout to join their brother Knights and the bishop in praying for the dignity of families, for men’s spirituality and to spread the example of fatherly love.

“The family is an important structure that’s being destroyed during these times with divorce and same-sex marriage, which is leading to a lot of problems with kids,” Paul Pagan of St. Finbar Council said, echoing the bishop’s words.

That’s why Pagan and other Knights felt a certain fatherly pride as they prayed alongside some of the Squires from St. Finbar parish, where the youth fraternity has about 40 tween and teenage members.

“We’re here to remember we’re centered around God and how important Catholicism is in what we do,” said Patrick Beisty, chief squire, who attended the service. He looks forward to taking his first degree as a Knight in the coming months.