FORT WORTH, Texas (Crux) – Chicago’s Cardinal Blase Cupich, whose archdiocese is home to one of the largest Hispanic communities in the United States, said Americans will look back in history to the present and “rejoice” for the Hispanic influence.

“In my experience as a priest and bishop, I have come to appreciate these qualities of fidelity, closeness, mercy and tenderness that seem to come naturally to Latinos,” Cardinal Cupich said during a homily he delivered on Saturday, the third day of a four-day gathering of Hispanic Catholics in Fort Worth, Texas.

“So it doesn’t surprise me that the first Latino pope speaks about [these qualities] so often! Viva el papa!” he said, to the cheer of the some 3,500 delegates from all over the United States who are participating in the V Encuentro.

The cardinal also said that he wanted to thank the Hispanic community for “enriching the life of the Church in the U.S. with your beautiful Latino culture, your culture of warmth, hospitality, tenderness, affection,” that is leading to a “new birth” in the life of the church in America because of the “qualities you are bringing.”

While acknowledging that the integration of Hispanic Catholics into the U.S. Church has at times been met with challenges, he acknowledged that, “as in any birth,” there are some pains and sacrifices, but “I’m confident that all Catholics, and hopefully all citizens of the U.S, will look back to the contribution you’re making to our faith and nation and rejoice.”

Cardinal Cupich also said that the Latino experience is a reminder for Catholics in the United States that the faith is not only about “what we hold” to be true, but about “who holds us.”

The cardinal was leading the opening prayer of the third day of the V Encuentro, a gathering taking place in Fort Worth, Texas, as a culmination of a four-year process of discernment and mission that began at a parish level in all the dioceses in the United States.

(For more about the history of Encuentro, see Currents News anchor Liz Faublas, below, talk with an expert on the history of the Encuentro, Mario Paredes, founder of the board for Catholic Association of Latino Leaders.)

Bishop Oscar Cantu of Las Cruces, who followed Cardinal Cupich in delivering the day’s keynote remarks, focused his attention on the importance of the Hispanic community putting down roots when it comes to ministry, so that the fruits of those efforts never become “spiritual tumbleweed.”

Bishop Cantu also said that many today “genuflect” to things that are not sacred – as he once did accidentally when going into the movies when he was a seminarian. Yet, “there is something within our hearts, within our spiritual DNA that searches for something sacred. And makes us want to genuflect to something, to someone and people are not finding what is truly sacred.”

“Brothers and sisters, this is a time for you and me, during this dry, long season, for you and I to dig deep. That we might find those living water that will nourish us and allow us to finally bear fruit, bear fruit that is sacred. A fruit of joy and of happiness and of peace,” he said, noting that even though many things are changing rapidly, the “human heart” continues to yearn for “love, beauty, truth and for what is good.”

Following Bishop Cantu’s talk, there was a panel involving three lay people: Brenda Noriega is the Young Adults Ministry Coordinator for the Diocese of San Bernardino, Calif.; Wanda Vásquez is the Director of the Office of Hispanic Ministry in the Archdiocese of New York and Sean Callahan is the president and CEO of Catholic Relief Services.

Noriega highlighted the previous evening here some 700 young adults shared dinner with some of the over 120 bishops participating in the V Encuentro, saying that it was “wonderful” to see the two groups interacting.

Continuing to Knock on Doors

“Working in the diocese, I can see the fruits [of the parish level Encuentro], young people continuing to knock on the doors of their neighbors,” Noriega said. “I witnessed parishes opening formation program because pastors are recognizing that people are ready to be formed, and not only that, but our people is ready to lead.”

Callahan said that, looking around the room, the fruits of the Encuentro were already visible, because the presence of the Holy Spirit was “palpable.”

Callahan also said that even though the Catholic Church is one of “faith,” it’s also a “church of action,” and as such, it should not be afraid to tell people about the “action that we do as a Church. Many don’t know about the millions of people you serve across the U.S.”

Despite the difficult times the Church is facing right now, he added, this is a time for the Church to set down deep roots but “not [have] our head on the ground. Let’s hold our heads high,” which earned him the support of the crowd.

Vazquez compared the Encuentro to a flame that was small “as a candle” when the process began at a parish level, “but now it’s blown up and it’ll never go out.”

She remarked on the importance of the intergenerational dialogue that took place during the entire process, with people who took part in the first Encuentros back in the 1970s participating in the consultation process. The Hispanic church, she said, is in many ways, “young, but also experienced.”

The participants then broke apart to work in behind-closed doors sessions to continue the conversation, and came together before lunch for a Mass celebrated by Boston’s Cardinal Sean O’Malley. 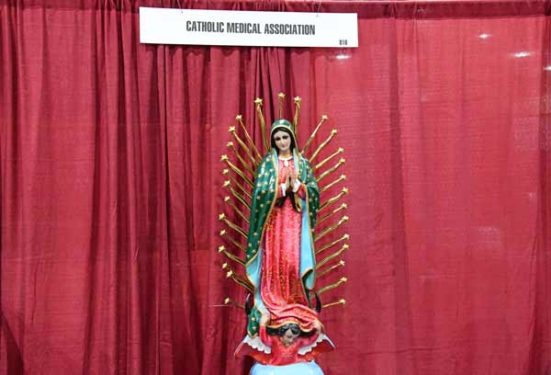 Much of his homily turned around Mary, the mother of Christ, and her yes to God, saying that it’s the most important moment in the history of humanity. He also noted Mary’s words in the Canna Wedding, when she instructs the servants to do “what he tells you,” referring to Christ, after the bride and groom had ran out of wine.

“Her first word was yes, and her last words was for us to say yes too,” Cardinal O’Malley said. “If we say yes, we’ll be able to help change history.”

Mary’s yes, the cardinal said, was “unshakable,” and she was there, standing, when her son, dying, told his disciple “here’s your mother,” noting that those words are repeated today, and that humanity is not orphaned: “We have a father who loves us even when we want to be live without him … and He gave us his own mother.”

Without going into specifics but in a clear reference to the clerical sexual abuse crisis, during his homily Cardinal O’Malley also said that in this “moment of pain and shame of our Catholic Church, our Celestial Father in his infinite mercy and kind providence, has given us this encounter as an oasis of joy, light and hope.”