The cardinal was visiting New York at the invitation of Mario Paredes, presidential liaison to Roman Catholic Ministry of the American Bible Society, to participate as a speaker at the New York Catholic Bible Summit the previous day. This year’s theme was “Live the Gospel of Joy!”

The summit was sponsored by the catechetical office of the Archdiocese of New York and the American Bible Society.

After the summit, Auxiliary Bishop Octavio Cisneros, vicar of Hispanic Concerns, and pastor at Holy Child Jesus, invited the cardinal to celebrate the Spanish Mass at Holy Child Jesus. The liturgical celebration that coincided with Father’s Day.

Father Osmín Vargas, parochial vicar, accompanied the prelates on the altar, and they were assisted by Deacon Raúl Elías and Deacon Jorge Castillo, master of ceremonies.

In his homily, Cardinal Omella highlighted the need to be humble, to listen and act in response to the call to be saints and apostles that God has made to all of us from the moment we received the sacrament of baptism.

The cardinal cited the apostolic letter of Pope Francis, “Gaudete et Exsultate” (“Rejoice and Be Glad”), and emphasized the call to holiness.

“To be holy is to live the Beatitudes and what is this? ‘Blessed are the poor because theirs is the Kingdom of Heaven.’ The poor is the one who has nothing to be proud of and puts it on and expects everything from the Lord. That is humility,” he said, concluding his reflection.

He spoke of the beatitudes of the merciful, the clean of heart and those who work for peace and forgiveness.

Cardinal Omella ended his homily saying that “it is not possible to be an apostle without praying, without participating in the sacraments, without coming to Mass. That seed will not bear fruit if we do not put it under the sun, that sun that is the love and Grace of God.”

At the conclusion of Mass and after the final blessing, Bishop Cisneros especially blessed not only fathers, but also grandparents, uncles, brothers and everyone who meets and has accepted this role of fatherhood from love. 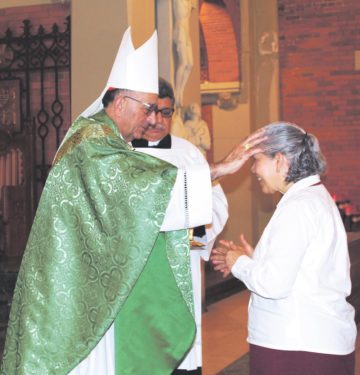 Change of Government in Spain

The Tablet spoke with Cardinal Omella to know his position on the recent change of government in Spain following a motion of censure against Mariano Rajoy, and to learn about the posture of the church on the initiative that looks for the independence of Catalonia.

“It’s a complex issue, as a church and as an archbishop, I want unity, harmony, work for the common good, respecting others and not violating anything.

“Let’s follow the way together, but from understanding, and not from confrontation, this is my position and also bishops’ of all of Catalonia, and I hope we can advance along that path,” said the cardinal, referring to the campaign for the independence of Catalonia from Spain.

The highest ecclesiastical authority of Barcelona also referred to the recent censoring motion where Pedro Sánchez, of the Socialist Party of Spain, assumed the presidency of Spain.

“This is a game, in the good sense of the word, a political game that is allowed by the Constitution. You can make a motion of censure as long as you have the necessary votes, and that’s what they have done.”

“What will happen? Well, we will see, according to the first steps that the new government is taking, which is legally evident, there is a sensation that they want harmony, they want peace, they want to advance listening to each other for the common good,” he said.

“A good signal, for example, was the Aquarius, a ship with 629 immigrants that arrived from the Mediterranean and that no country wanted to receive, but Spain did it, and it’s a good sign of Spain’s government and the church also wanted to collaborate. Let’s advance on that path of concord, well-being, and peace,” said the cardinal.

During the conversation, The Tablet talked to the cardinal about immigration, something that both the United States and Spain know in-depth.

“Pope Francis has given us very good keys from the Gospel, and he tells us that the land belongs to everyone, not just a few, so we all have the right to go from one place to another,” said the cardinal said.

The prelate spoke not only about the need for solidarity, but also the investment of First World nations in those poor countries affected by the cruelty of the war in order to “they do not have to flee, or if they come – to our nations – they do it but not by necessity. One who flees from hunger and war must be embraced,” he said.

“All this must be done with a sense of solidarity and in an organized way because each country has to know the number of immigrants that enter.