Archbishop Molloy High School is a Catholic Marist school that offers a challenging academic program rooted in Gospel value, has been recognized by U.S. News & World Report as an Outstanding American High School and was named an Exemplary Secondary School by the U.S. Department of Education.

Molloy’s well-maintained and fully equipped facilities include a renovated cafeteria, chapel, main entrance and library, research center, four science labs, theatre and two gymnasiums. The six-acre campus includes an all-weather outdoor track and baseball field. Molloy has created a comprehensive program for integrating iPad technology in the learning environment.
Molloy’s extensive programs for both academic and personal counseling help students select colleges that are best for them and to win scholarships at top Ivy League, Catholic, private and public universities.

All school programs grow out of the Marist Brothers’ mission of service and promotes students’ spiritual and emotional development.

Thanks to the distinguished faculty’s commitment, and the rigorous college preparatory curriculum that is the hallmark of a Molloy education (including a variety of honors and AP courses), 100 percent of graduates are able to realize their true potential and attend prestigious colleges.

The Stanner experience involves far more than just rigorous work in the classroom. School trips such as excursions to Italy, service projects in the Basilica of Lourdes, and Nicaragua, are the kinds of experiences that help broaden the students’ perspective and gives them a clearer picture of the global community. The Marist Brothers Center at Esopus is the site of many camps and retreats at which Molloy students can either attend or work as counselors and service staff.

Given the vast array of interests demonstrated by the school’s diverse population, Molloy hosts something for everyone through a wide variety of clubs, arts activities and sports teams, where students can devote themselves to further exploration in their areas of interest such as math and science (via the Math Team, Science Olympiad or the Advanced Science Research Program); diplomacy and law (via the Model U.N. and Mock Trial clubs).

Molloy offers a host of arts activities such as Dance Club, String Ensemble, and the highly acclaimed Stanner Players theater group. The Stanner athletics program is one of the most highly regarded in New York, with trophy cases full of city championship awards thanks to a tradition of excellence built by legendary coaches like the late Jack Curran (basketball, baseball), Frank Rienzo (track), Andy Kostel (soccer) and others that continues to this day. The discipline, team building and sportsmanship that are intrinsic to sports at Molloy are skills which bode well for continued success not just in school, but in life.

Admission to Archbishop Molloy High School is competitive. Candidates who are admitted typically score in the top 65 percent on nationally normed standardized tests, and have report cards with marks consistently in the mid-80s and above. To apply for admission, take the Test for Admissions to Catholic High Schools (TACHS code #012) or the Catholic High School Entrance Exam (CHSEE code #012). First choice preference is given, but all choices are considered. Molloy no longer administers a Scholarship Exam for incoming freshman, however academic and named scholarships are available. 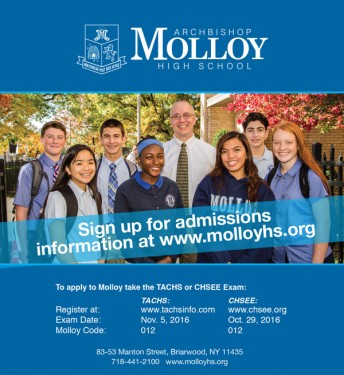