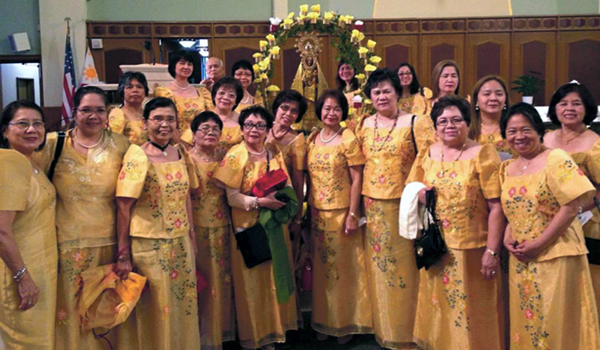 The Filipino Ministry at St. Michael’s, Flushing, celebrated its second annual procession for the Feast of Our Lady of the Rosary, La Naval, with a special guest.

Archbishop Paul Junmin Pei, of Shenyang, China, was the main celebrant. He was joined at the altar by Father John Vesey, pastor, and Auxiliary Bishop Raymond Chappetto presided.

Our Lady of the Rosary has been honored as the patron of the Filipino Apostolate at St. Michael’s. Last year, a special statue of her image was installed at the church.

Although it is usually celebrated on the first Sunday of October, Michael Pasion, president of the Filipino Apostolate, moved the occasion.

The day began with a procession through the streets of Flushing while the Rosary was recited in English, Tagalog, Spanish, Korean and Chinese. Marian hymns were sung.

At Mass, Archbishop Pei focused on the missionary spirit of the Church. He said that missionary work is alive in his home diocese. While it is clear that prayers are needed for the success of missionaries around the world, he said material donations are also necessary.

He praised the United States as a “land of immigrants,” and said he was pleased to see so many immigrant groups active at St. Michael’s.

The archbishop further said that by living in such an immigrant diocese, the people in Brooklyn and Queens get a chance to discover a true missionary spirit on a day-to-day basis.

Bishop Chappetto referred to the presence of Archbishop Pei as “a gift to our diocese and the parish of St. Michael.”

Sister Jane Scanlon, C.N.D., a pastoral associate at St. Michael’s, remarked, “What was going to be a Filipino experience became a multi-cultural celebration with the presence of a Chinese and a Brooklyn bishop, as well as English-speaking, Chinese, Filipino and Spanish priests at Mass.”

Contributing to this article was Shirley Figueroa-Lascano.