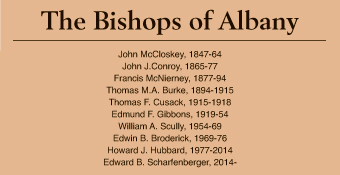 The Cathedral of the Immaculate Conception is the Mother Church of the 14 counties of the Diocese of Albany, N.Y. It houses the “cathedra,” the bishop’s chair and symbol of his teaching authority as chief pastor and shepherd over the Church of Albany.

A distinguished and historic feature of Albany’s skyline, the Cathedral’s trademark spires create a striking contrast against the modern forms of the Empire State Plaza. Iridescent 19th-century stained-glass windows imported from England, intricate Dutch and German wood carvings, stunning ornamental plaster work and soaring spatial splendor combine to elevate the cathedral as one of America’s most unique and important ecclesiastical structures.

“The cathedral,” Albany Bishop Howard Hubbard states, “is a dynamic symbol of the sacred in the midst of the secular, offering beauty, solace and comfort to all who enter.”

The cathedral is the brainchild of Bishop John McCloskey, whose immigrant Irish flock came to America from Ireland during the harrowing potato famine. Being poor and uneducated, they became the object of much ridicule and scorn from the Yankee establishment. The “Know Nothing Movement” at the time was strong in its attacks on immigrants, especially Catholics. Bishop McCloskey realized that his first task was to help Catholics take their rightful place in their new country. One way for this to be done was by building a great cathedral of which all could be proud. He commissioned a young Irish architect, Patrick Charles Keely (1816-1896) of Brooklyn, to design and build Albany’s cathedral. Keely had emigrated to New York in 1842 at age 26.

Bishop McCloskey of Albany and Bishop John Hughes of New York laid the cornerstone of the cathedral on July 2, 1848 with over 10,000 people watching in the rain. Bishop McCloskey campaigned throughout the U.S. and the world for funds to build this church. It was completed for $250,000 ($6.5 million in today’s dollars).

In just five years, the nave and towers were built by an immigrant work force, which included many volunteers. The cathedral was dedicated by Bishop McCloskey, Archbishop Hughes and other major Church leaders on Nov. 21, 1852. It is the third oldest Catholic cathedral in the U.S. The two oldest are the Co-Cathedral-Basilica of the Assumption in Baltimore and St. Louis Cathedral, New Orleans.

When the doors opened to the public, the structure was somewhat different than it looks today. The trademark spires had not yet risen above the north and south towers. The western wall stood where the choir stalls now stand, and the “Lady Window” was set over the altar. The magnificent ornate plasterwork, faux stone walls, carved ribs, ceiling bosses, vaulting and statuary all date from the original construction.

The bells were blessed by Bishop McCloskey on Nov. 16, 1862. They were placed in the north tower and rang for the first time on the eve of the Feast of the Immaculate Conception, Dec. 8, 1862. The bells were cast in West Troy (Watervliet), N.Y., in the legendary Meneely Bell Foundry.

Between 1891 and 1892, during the time of Bishop Francis McNierney, the apse and adjoining sacristies were added, completing the structure. On Nov. 16, 1902, marking the 50th anniversary of its dedication, the cathedral was consecrated by Bishop Thomas M. A. Burke.

Throughout the 20th century until the mid-1960s, the cathedral served as a parish church to some 3,000 households. It was the parish church to Gov. Alfred E. Smith. His daughter Catherine was married there in 1928. It has witnessed many historic events: the consecration of bishops, the ordination of priests, deacons, the visits of cardinals and the visit of the Archbishop of Canterbury, the Right Reverend Michael Ramsey.

In the mid-1960s, the construction of the Empire State Plaza reduced the parish congregation to about 300 households, threatening the very existence of the cathedral itself. Due to the vision and foresight of Albany’s seventh bishop, Bishop William A. Scully and Gov. Nelson A. Rockefeller, the cathedral was not razed. Bishop Edwin B. Broderick, the eighth Bishop of Albany, was the first to propose a major restoration of the building. In 1977, Father Howard J. Hubbard became the ninth Bishop of Albany, becoming the first native of the Albany Diocese to become its chief shepherd.

In 1986, the cathedral became the site of the first-ever service of forgiveness between Christians and Jews on Palm Sunday. This event is commemorated by the sculpture “Portal,” which is located outside the cathedral just west of the sanctuary.

Under the leadership of Bishop Hubbard, the cathedral since the year 2000 has been undergoing a major process of restoration and renewal.

Deteriorated stone on the north tower and clerestories has been replaced by new sandstone imported from England. A rolled lead roof, the only one of its kind at present in America, was installed. The roof is a modern version of what was used in medieval times. The east façade, the main entrance to the cathedral, has received new granite steps in addition to richly carved sandstone portals adorning the doorways. More stone restoration is planned for the east façade, south tower, transepts and aisles.

The spacious and soaring interior has been repaired and renewed to its original artistic beauty. The main interior enhancements, completed in 2010, feature improved seating, lighting and plaster repair. The crowning achievement of the interior restoration is a magnificent paint scheme, evoking the original design of Patrick Charles Keely. The restored worship space brings a fresh vitality to the cathedral’s role as the center of diocesan liturgy and community. [hr]

The source for most of this article is the Very Rev. William H. Pape, rector of Immaculate Conception Cathedral, Albany.