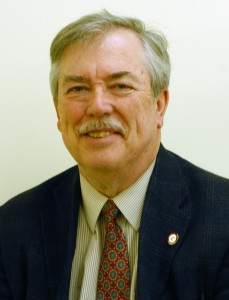 It was exciting moment when the Catholic Coptic Patriarch of Egypt stopped by our offices last week.

Earlier in the day, I attended the 9 a.m. Mass celebrated by His Beatitude Antonios Cardinal Naguib. Following Mass and breakfast, Tablet reporter Antonina Zielinska interviewed the patriarch at the rectory. After that, he was chauffeured the four blocks to our new offices that we share with The NET on Tenth Ave.

Msgr. Kieran Harrington, Vicar for Communications, welcomed the cardinal and then introduced him to the staff of the diocesan television and newspaper offices.

A genial and unassuming man, the patriarch was perfectly at ease as he smiled and greeted each staffer in excellent English. He posed for photos, signed a portrait, and enjoyed Middle Eastern desserts, “imported” from Astoria.

In his TV interview with Currents anchor Matt McClure, the cardinal spoke passionately about the unrest in Egypt.  Admittedly happy to be rid of the Mubarek regime, he added that the initial celebration was short-lived. Only a week after the popular uprising took place, several Christian churches were attacked by Islamic extremists.

In the past month, however, the patriarch noted there have been no such attacks and there are further signs that the current rulers are willing to work to protect the rights of Christians, who make up only 10% of the Egyptian population.

The history of Christianity in Egypt has been one of persecution. The Church was established there in the first century by the evangelist St. Mark, who is considered to be the first bishop of Alexandria.  The seat of the episcopacy there was a highly regarded and influential position in the early Church.
The patriarch was made a cardinal-bishop at the consistory of Nov. 20, 2010, when he became the only Eastern Catholic patriarch eligible to vote in a papal conclave.

During his time in Brooklyn, the patriarch stayed at Holy Name rectory, which is the residence of Father Antonios Sherif Fanous, a Catholic Coptic priest who tends to the spiritual needs of his people in the area.

The cardinal also met with Bishop Nicholas DiMarzio at the diocesan offices at 310 Prospect Park West, where they discussed the current situation in the Middle East.

For a slide show of the events visit: http://www.youtube.com/watch?v=p9q-mIhamVQ