This year, the parish is marking 75 years of service to the Flushing and Whitestone communities, and the Mass of rededication was the highlight of a yearlong celebration.

“It’s beautiful,” said longtime parishioner Bill Brady, echoing the sentiments of fellow parishioners and clergy as they set foot into the worship space. “It’s so bright and nice.”

Brady and others watched with pride as Bishop DiMarzio anointed and incensed their church altar. The rededication ceremony included the litany of saints, the anointing of the church walls and the lighting of the church and its candles.

“We considered what saints would be significant for the parish,” explained Father Gerard Sauer, pastor since 2013. “We have a very active St. Vincent de Paul Society so choosing Vincentian saints made sense.”

Founded in the 1970s, the parish’s St. Vincent de Paul Society is known for its outreach within and beyond the local area: providing an in-home assistance program for older adults, twinning with less fortunate parishes and aiding local charities like Hour Children.

Helen Donnelly, longtime president of the society, died just days before seeing the completed renovation. Her family was present at the rededication Mass.

Donnelly was also remembered in the homily offered by Msgr. Kieran Harrington, diocesan vicar for communications and a native of the parish.

The monsignor recalled growing up in St. Mel’s, and the priests, religious sisters and lay people who made an impact on him.

“Today, on a Friday, this church is packed. That is a testament to you,” he told the parishioners.
Msgr. Harrington also congratulated Father Sauer for finishing the renovation “on time and on budget.”

In renewing and elevating the church’s aesthetic, the parish contracted EverGreene Architectural Arts, which oversaw the renovation of the Co-Cathedral of St. Joseph, Prospect Heights.

Interior renovations include the restoration of the original crucifix and tabernacle to the center of the altar, replacing carpeting with tile, new paint, reimagined chapel and confessional areas, murals of Mary, Undoer of Knots and St. Joseph on either side of the altar and 18 hand-designed and hand-painted ceiling medallions.

The renovation was funded entirely by parishioners through the Generations of Faith capital campaign. The diocese set $800,000 as the parish goal, and $1.6 million as a challenge goal. Parishioners responded by pledging over $2.4 million.

Being pastor in this anniversary year and overseeing the renovation has been “a wonderful privilege,” Father Sauer said.

Carved from the parishes of St. Luke, Whitestone, and St. Andrew Avellino, Flushing, St. Mel’s parish was established in February, 1941, by Bishop Thomas E. Molloy to meet the growing population of Irish Catholics in north Flushing. Father Terence Sharkey was the first pastor, who served just shy of three months.

Longtime parishioners still recall the early days when Mass was held in a Bayside Ave. storefront, then home to the North Flushing Democratic Club, and now a hair salon.

Usher Bill Brady was a sixth-grader at St. Andrew Avellino School at the time and recalls setting up chairs for those storefront Masses with his siblings.

“We had a portable organ. We’d carry that in and my sister Bernadette played the organ,” he said. “There was so many people on Sunday, they had to get another place.”

Masses soon moved to a large tent on Bayside Ave. and Murray St. before a temporary wooden church was dedicated in 1944. A decade later, the building was moved on a flatbed to Plainview, L.I., where it still serves as St. Pius X Church.

Ground was broken in July, 1954 on the current church, which was intended as a church and an auditorium with the hopes that it might serve as the gym for a parish school one day. Auxiliary Bishop Edmund J. Reilly dedicated the church in 1955.

Five years later, the parish realized its dream of opening a school under the direction of the Sisters of St. Joseph, and later the Sisters of St. Dominic. Both religious orders were represented and recognized at the rededication Mass. The school transitioned to an academy in 2014 and continues to education local children in faith and academics.

In anticipation of the parish’s 40th anniversary in 1981, the church’s interior was remodeled to reflect the liturgical requirements of Vatican II and the exterior was renovated.

Many of the same people who belonged to the parish then are still there now, and have added another generation to their families. More than 1,100 people attend Sunday Masses – four in English and one in Italian – and the parish family remains predominantly Italian, Irish, German and Croatian. 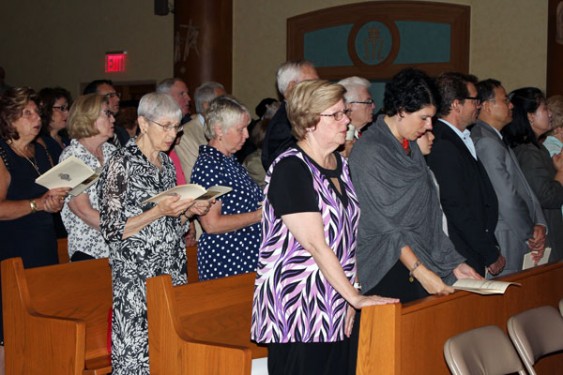 “My whole life revolves around this parish,” said parishioner Rita Higgins, who joined St. Mel’s when she and her husband moved to the area in January, 1951. She raised her children in the parish and was involved in various groups.

Now in her early 90s, she remains active in the St. Vincent de Paul Society.

During the renovation process this past summer, she said her prayer was simply this: “‘Please God, let me live long enough that I can be buried from St. Mel’s.’ That’s what St. Mel’s means to me.”

Having received all of her sacraments at St. Mel’s, Kayla Conelli, a student at St. Francis Prep H.S., Fresh Meadows, feels a strong connection to the parish. She attended the rededication Mass with her parents.

“The people that come here, we see them every Sunday, so they feel like part of my family,” she said. “It’s comforting to come here every Sunday.”

“I don’t know how much further a parish can go than this one,” added Bill Brady.

“The parish has come alive and that is because of Father Sauer. He’s the guy that keeps it going. Everybody knows each other. Everybody has a job to do. And he keeps it that way.”

After extending his thanks to the bishop and all who attended the rededication Mass, Father Sauer took a moment to address his parishioners.

“Every single day of my life, I thank God for each and every one of you, and I am so grateful for all that you do,” he said.

Looking toward the next 75 years, he hopes the parish “continues to be a vital presence for the Catholic community in this part of Flushing and Whitestone.”