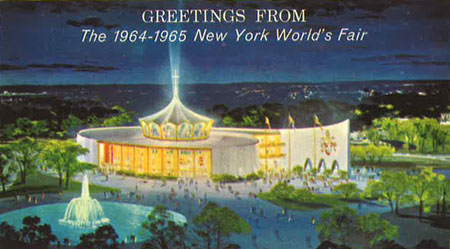 I’m a collector. I save all kinds of souvenirs. Brochures. Match book covers. Ticket stubs. Programs. Photographs. Sometimes I don’t even know what I have in my treasure trove. So, you can imagine my surprise, when rummaging through the garage, I found a whole bag full of N.Y. World’s Fair memorabilia from 1964-1965. It just happened to coincide with our celebration of the 50th anniversary of the Fair, the show to end all shows. 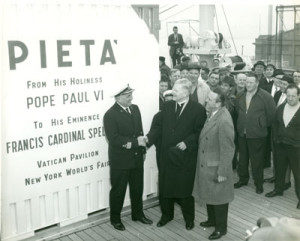 Of course, so much of a Catholic’s memories of the Fair surrounds the Vatican Pavilion (see back page of photos) with its display of Michelangelo’s masterful Pieta, depicting Mary, the Mother of Jesus, holding His dead body after it had been taken down from the cross.

Who can forget the four moving platforms that took viewers past the Pieta that was displayed behind bulletproof glass. The viewing hall was dark with strategic blue and white lighting highlighting the statue. Serene religious music played in the background.

The display of the Pieta was not only an honor for the Fair but a special privilege for the Diocese of Brooklyn where the Fair was taking place. There was a team of Brooklyn priests, headed by Msgr. John J. Gorman, that was part of the planning committee for the Pavilion that was located adjacent to the passage over the Long Island Expressway. Others local members of the committee included Msgrs. Raymond Leonard, James Asip and James Lahey. 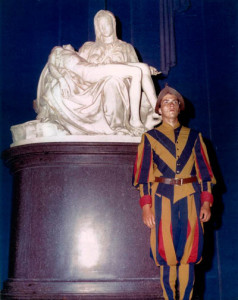 The Pieta was the most valuable item at the Fair. It had been transported from St. Peter’s Basilica at the Vatican with great care. It crossed the Atlantic on the ocean liner Cristoforo Colombo guided by Capt. Guiseppe Soletti, who called the artwork “my most important cargo” in 39 years at sea. The work was safeguarded with special flotation collars in case of an accident. When the ship arrived in New York, it was personally welcomed by Brooklyn’s Bishop Bryan J. McEntegart.

The shipment was unloaded in Manhattan onto a derrick barge and towed by two tug boats to Flushing Bay. From there, it was transported by trailer to the site of the Vatican Pavilion, only days before the opening of the Fair on April 22. 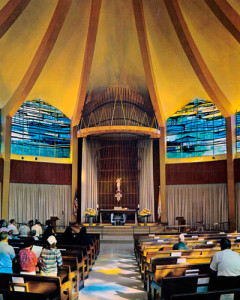 Several days before, a private blessing and dedication, with 43 bishops in attendance, was held at the Pavilion. Cardinal Paolo Marella, archpriest at St. Peter’s Basilica, Rome, and papal legate to the Fair, was the main celebrant. Bishop McEntegart preached.

But the Pieta was not the only priceless attraction transported at the same time to the Pavilion. Above the main altar was a third-century statue of the Good Shepherd, believed to be one of the earliest depictions of a beardless Christ. The statue had been reconstructed several centuries before from 34 fragments found in the Roman Catacombs. Unlike the Pieta, it had been shown at several international exhibits before the Fair. 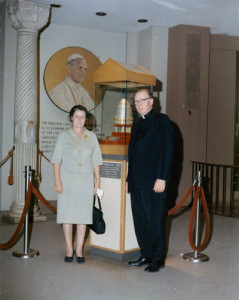 There also was an information booth at which visitors could pose questions about the Church to a priest, stamp and coin exhibits and the Chapel of the Good Shepherd.

Little known is that many interior and exterior fixtures of the chapel – including stained glass, reredoes and the ring in which the lights were recessed above the altar – were used in the construction of St. Mary Mother of the Redeemer Church in Groton, Conn., in the Diocese of Norwich. Atop the church is the golden-anodized aluminum cross that topped the Vatican Pavilion.

Another piece of the Pavilion that was recycled is the top part of the marble stand on which the Pieta rested. It can be found at Immaculate Conception Pastoral Center in Douglaston. A replica of the Pieta sits on it in the lobby of the main entrance.

The New York World’s Fair was a special place and a special time. Fifty years later, it’s fun to remember. Fortunately, we still have reminders to jog our memories.