The country’s only church under the protection of St. Benedict Joseph Labre is marking its 125th year in Richmond Hill.

To mark this milestone and the parish patron’s feast day, Auxiliary Bishop Neil E. Tiedemann, C.P., served as the main celebrant and homilist at a bilingual Mass of thanksgiving in Spanish and English April 30.

“Today we celebrate that you have received a gift of 125 years – as a parish, a family, a loving worship community,” the bishop said to the congregation. “Every gift has a jewel in it, and your jewel is St. Benedict Joseph Labre.”

An 18th century French mendicant, Benedict Joseph Labre was known as ‘the poor man of the Forty Hours Devotion,’ because he gave himself to a life of poverty, pilgrimage and Eucharistic adoration.

A wood-carved statue of the saint stands in the church to the right of the altar on an elevated platform, surrounded by votive candles. Unlike the other statues, which face the congregation, the figure of parish patron has its gaze appropriately fixed upon the tabernacle.

“He spent many years trying to enter a religious community to be a priest, only to be heartbroken,” the bishop explained. “Searching to serve God, his life became a pilgrimage, and he’d go from shrine to shrine, encountering the graces of God as he walked through life.”

By the grace of God, the wandering saint found a permanent home in the farmlands of southwestern Queens when a small group of Irish and German Catholics, who cropped up amid the Protestant settlers, asked Brooklyn’s second Bishop, Charles E. McDonnell for a church of their own.

In April, 1892, the bishop established his first parish, which he placed under the patronage of the newly canonized St. Benedict Joseph Labre, to whom he developed a devotion while studying in Rome.

The cornerstone for a wooden church was laid Nov. 6, 1892, and Bishop McDonnell dedicated the building on Oct. 8, 1893. The parish later added a rectory, parish hall, a school staffed by the Sisters of St. Joseph, a convent and a cloister garden.

As the Catholic community grew, the cornerstone was laid for a larger church in October, 1916. Architect Thomas Henry Poole designed the current Romanesque-style brick building, which Bishop McDonnell dedicated May 4, 1919.

A 1941 renovation included a new marble altar, confessionals, tiled aisles, heating system, baptistery and stained-glass windows. Redecorated again in the 1960s, the church underwent repairs after a 1971 fire and a bell tower leak over a decade ago.

The church was added to the National Register of Historic Places in 2007, and one of its greatest artifacts is a Peace Monstrance, funded by parishioners’ donations to honor those who served and died in World War II.

During Mass, Father Pizzo also recognized Sister Maria Rypkena, C.S.J., former director of religious education, who grew up in the parish after her family emigrated from the Netherlands.

Expressions of “Welcome home” and “It’s so good to see you,” could be heard in the church vestibule as parishioners and guests arrived for Mass. They greeted each other with smiles and embraces.

“People love each other here,” said Joan Overton, music director. “You walk in and there’s always somebody here to say ‘Hi,’ to give you a hug and a kiss. That’s part of what church is about, it’s about family, and that’s what this parish is – family.”

While the founding families, whose names are listed on plaques in the church foyer, were of European descent, today the parish is multicultural and largely Spanish-speaking, as reflective of the area. Richmond Hill is home to mostly Indian, Bangladeshi, Hispanic and Guyanese immigrants, who identify as Christian, Sikh, Hindu and Muslim. 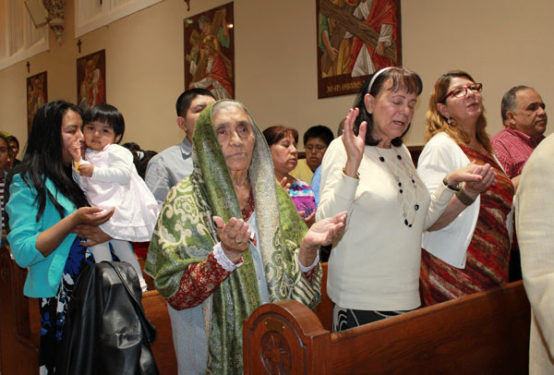 “The parish has changed, the neighborhood has changed,” said Ted Metzing, a lector at Mass, and a parishioner since 1972. “Change is good. It brings out things in us and gives us an opportunity to be who we’re called to be – followers of Christ.”

He recalled how the parish opened its doors to the local Sikh community after their gurdwara (place of worship) burned down in 2008.

“What we decided to do was to open the auditorium to them so that they could do their Sunday things, so they weren’t disrupted, and that’s what it means to be community,” Metzing said. “We were in union with one another, not in our beliefs, but in our hearts.”

Angel Rodriguez felt something stir in his heart when he first set foot inside St. Benedict Joseph Labre Church on a Thursday evening about 25 years ago. He came for a meeting of the Spanish Charismatic Renewal, but stayed for the faith and the people he found there.

Commending the parish on its “125 years of being the Body of Christ,” the bishop encouraged the faithful as they move forward to continue following their parish patron, “who teaches us how to live, and really blesses us as we are – a community searching for God with hearts filled with desire.”

2 thoughts on “125 Years of Faith in Richmond Hill”