Three men who are studying outside the diocese were ordained transitional deacons by Auxiliary Bishop Raymond Chappetto on Saturday, May 30 at St. James Cathedral-Basilica in Downtown Brooklyn.

They are Lukasz Kubiak and Jaroslaw Szeraszewicz, both natives of Poland, who attend SS. Cyril and Methodius Seminary, Orchard Lake, Mich., and Haitian-born Gesson Agenis, who is at Holy Apostles Seminary, Cromwell, Conn.

As transitional deacons, they are scheduled to be ordained to the priesthood for the Brooklyn Diocese next spring.

Each has been doing pastoral work in a local parish and will continue to do so during the summer. Deacon Kubiak has been working at St. Matthias, Ridgewood; Deacon Szeraszewicz at Sacred Hearts-St. Stephen, Carroll Gardens; and Deacon Agenis at St. Teresa, Sterling Pl., Crown Heights.

Deacon Agenis had been studying in Haiti for the Redemptorist Order but changed his mind because “I felt my calling was more to the diocesan priesthood. I feel more comfortable in parish life.”

He came to the U.S. on vacation in 2010 and was introduced to the Brooklyn Diocese, where he decided to enter its house of discernment. He studied English at St. John’s University, Jamaica, and last year was assigned to the major seminary in Connecticut.

“I am so blessed to be called by the Church to the Holy Orders of Diaconate and to serve God’s people in the Diocese of Brooklyn,” he said. 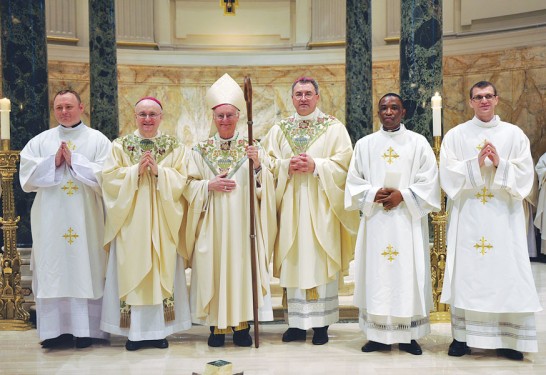 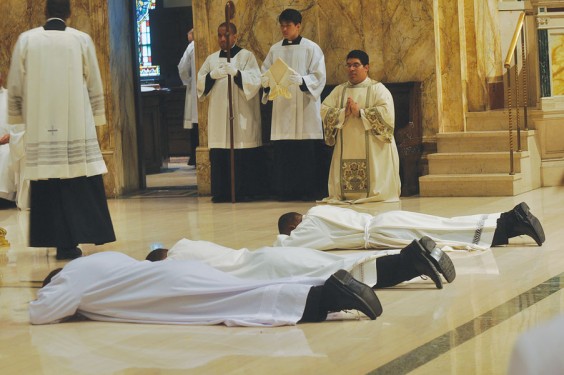 The three deacons lie prostrate in the sanctuary at St. James while the congregation chants the Litany of the Saints. 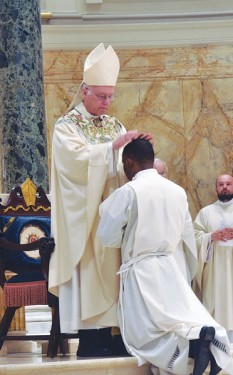 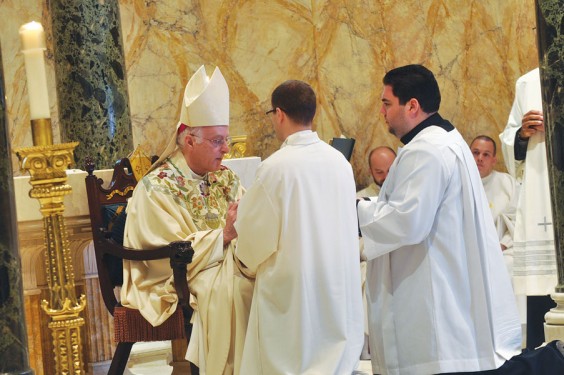 Deacon Kubiak with his mother, who flew from Poland to be present. 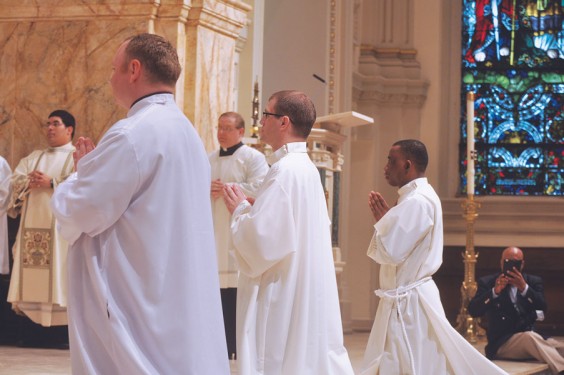 As transitional deacons, they are scheduled to be ordained to the priesthood next spring.

Deacon Kubiak said that he had a traditional Catholic family upbringing in Poland.

“I have had amazing experiences in life,” said Deacon Kubiak. “Once, while I was travelling, I felt that the Holy Spirit led me to a church, which I thought was Lutheran, but in fact was holding Mass in Polish with a young choir singing Christmas carols also in Polish.

“During this situation, I felt as though I was having a divine conversation. After confession, I sensed I had received confirmation regarding this future vocation. The feeling of this experience of faith is something I can never forget.”

Deacon Szaraszewicz said that his parents had a great influence on his desire to follow a religious vocation.

“They were the first to introduce me to the Catholic faith and the Church,” he recalls.

“Another major influence of mine was Pope John Paul II. I had the experience of seeing him in 2002, during his last pilgrimage to Poland. Listening to his words live, I felt the full impact of his words, and this convinced me that becoming a priest was the right thing for me.”

After serving in the Polish Army, he continued to pursue his priestly calling.

“There is something about the priesthood that is indescribable. It is impossible to put into words,” he said. “Many of the priests I have met have seemed so happy with their lives, and the joy that God fills them with is hard to understand. I hope that in becoming a diocesan priest that I will fulfill all my obligations and duties as a priest to the best of my abilities.”

Present at the ordination Mass were Bishops-elects James Massa and Witold Mrozewski.