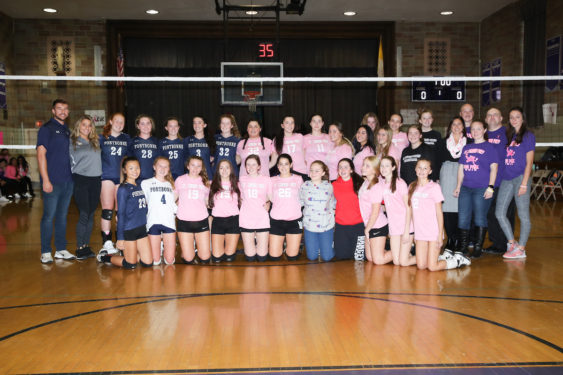 For the fourth year in a row, the girls’ volleyball program at St. Edmund Prep H.S., Sheepshead Bay, has partnered with the Side Out Foundation to coordinate a series of “Dig Pink” events to raise funds and support the cause during Breast Cancer Awareness Month.

The Eagles hosted a number of Dig Pink events throughout October, including dress-down days, bake sales and a student-faculty volleyball game. The highlight of the month was the annual Dig Pink volleyball matches against Fontbonne Hall Academy, Bay Ridge.

This year, it was a family affair. The St. Edmund Prep Dig Pink ambassador is Juliana Moule, ’20, and her older brother, Alex, a 2015 graduate of St. Edmund’s, is the volleyball coach at Fontbonne.

“It was a good opportunity to be able to come together for a common cause that we were all passionate about,” said Moule, a senior team captain for the Eagles.

St. Edmund’s is well on its way to surpassing the fundraising goal of $5,000 — the fourth year in a row that the Eagles will have beaten their target.