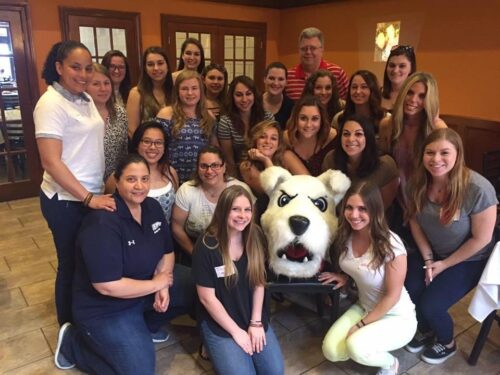 St. Francis College, Brooklyn Heights, women’s bowling alumnae Meghan Wing, ’17, and Jamie Kelly, ’17, came together to spearhead a group of fellow bowling alums to collect funds for donations to Terriers on the front lines of the COVID-19 pandemic.

Jaden Victor, a senior linebacker on the Xaverian H.S., Bay Ridge, varsity football team, has signed on to play for Long Island University, Downtown Brooklyn. Victor recorded 20 tackles for the Clippers his senior season en route to being named a Tablet All-Star.

We’re still a few months away, but it’s never too early to restart the debate of whether Brooklyn diocesan hero and devout Catholic Gil Hodges should be elected into the National Baseball Hall of Fame.

This fall, the Hall of Fame’s Veterans Committee will convene to consider Hodges among a number of Golden Era players for baseball immortality. To date, the Brooklyn Dodger legend and World Series-winning New York Mets manager has been considered at least 19 times by various committees – the last of which came in 2015.

Any candidate would need 75 percent of the vote for enshrinement. Hodges may face stiff competition from the likes of Jim Kaat, Ken Boyer, Tony Oliva, Maury Wills and Don Newcombe.

It’s really a mystery why Hodges has not yet taken his rightful place in Cooperstown, N.Y. He has the numbers, the championship pedigree and most importantly the integrity of any Hall of Famer inducted.

We would love to hear your memories of Hodges from his days at the steady first baseman for “Dem Bums” or from his time elevating the lowly Mets into the Amazins’ of 1969. Please send a Letter to the Editor or email jmmanc@gmail.com.

Student-athletes from Msgr. McClancy H.S., East Elmhurst, have taken to social media to show their support for health care workers during this time.

Through Instagram and TikTok videos, the students showed off signs they’ve made saying “Thank You” to all the essential employees taking on the coronavirus.