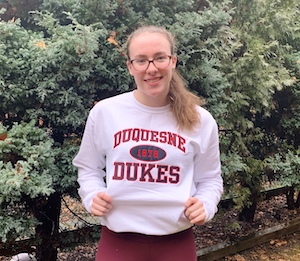 Orla Egan, a junior on The Mary Louis Academy, Jamaica Estates, varsity swim team, has committed to Duquesne University, Pittsburgh. She was named an All-American after taking home fourth place in the 500-yard freestyle at the New York State Championship meet. She is also a six-time New York Federation Championship finalist and a two-time USA Swimming Scholastic All-American.

In a big upset in the varsity ‘A’ championship, Fontbonne Hall Academy, Bay Ridge, turned in a valiant effort to knock off the regular season champions from St. Joseph H.S., Downtown Brooklyn.

Congratulations to this year’s diocesan GCHSAA basketball coaches of the year: