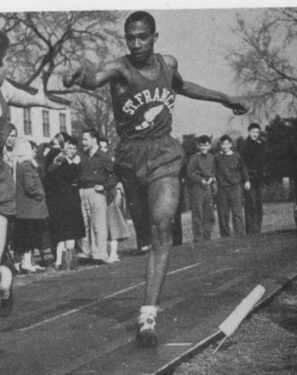 Leslie “Les” Pinder, an honorary member of the St. Francis Prep, Fresh Meadows, Class of 1959, died peacefully from natural causes on Jan. 15. As a freshman, he earned a spot on the Prep’s varsity team and quickly established himself as the best sprinter in the Northeast.

Pinder won 28 consecutive major meet events while amassing 11 school records in the sprints and long jump. He was inducted into the inaugural class of the “Terrier Red and Blue Ring of Honor” in March 2014.

Holy Cross H.S., Flushing, junior Samantha Rodriguez was awarded the prestigious Leaders of Tomorrow Award, given to an outstanding student track athlete who demonstrates leadership qualities. The award is given out by the 27th Battalion of the U.S. Air Force.