Two members of the new executive board of the St. Joseph’s College Brooklyn, Clinton Hill, Student-Athlete Advisory Committee have ties to the local GCHSAA.

Rising senior Lauren Quesada, a member of the school’s women’s basketball and soccer teams, will serve as president for the upcoming school year. She is a graduate of St. Francis Prep, Fresh Meadows.

This year’s secretary will be Gina Hopkins, a graduate of Msgr. McClancy H.S., East Elmhurst, and a member of the Bears’ women’s basketball team.

The purpose of the Student-Athlete Advisory Committee is to promote communication between athletics, administration, students and faculty as well as create a positive image of student-athletes on campus.

Kieran McArdle, the most decorated player in St. John’s University, Jamaica, men’s lacrosse program history, earned a spot on the Team USA Indoor Championship roster. He will be one of 23 players to represent the U.S. at the 2019 Federation of International Lacrosse World Indoor Championship in British Columbia from Sept. 19-28.

During his time at St. John’s, McArdle was a three-time U.S. Intercollegiate Lacrosse Association All-American and two-time Big East Offensive Player of the Year. He remains the Red Storm’s all-time leader in career points, goals and assists and became the first Johnnie to amass 200 pts., 100 assists and 100 goals in a career. 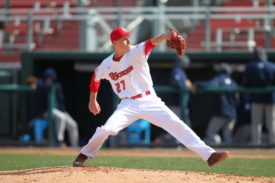 Former St. John’s University, Jamaica, right-handed pitcher Cody Stashak was called up to the Minnesota Twins big-league roster in late July. It was his first professional call-up since being drafted by the Twins in the 13th round of the 2015 MLB draft.

After transferring to Queens from Cumberland County College, Vineland, N.J., Stashak pitched the 2015 season for the Red Storm, a squad that won the Big East regular season and tournament titles. He went 7-4 with a 3.57 ERA in 16 starts on the mound.

He made his debut for the Twins out of the bullpen on July 23 in a home game against the New York Yankees. He pitched two innings and allowed four hits and no runs.