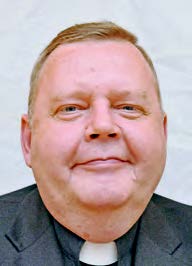 Father Christopher T. Cashman, a priest of the Diocese of Brooklyn ministering as the pastor of Saint Mary Star of the Sea, Crown Heights, died Friday, Dec. 9.

He served the Diocese of Brooklyn as pastor of Saint Mary Star of the Sea (Brooklyn) and Saint Aloysius (Ridgewood).

Father Cashman was also a member of the Priests’ Purgatorial Society.

“We were classmates at Immaculate Conception Seminary. We were ordained together on June 3, 1989,” said Father Edward Kachurka, pastor of St. Gregory the Great Church in Bellerose.

A funeral Mass for Father Cashman was held Wednesday, Dec. 14, at Saint Mary Star of the Sea Church. Bishop Robert Brennan was the celebrant and the homilist. Burial followed at St. John Cemetery, Middle Village.

Sister Margaret John was a member of St. Katharine of Siena Parish in Wayne, Pennsylvania. She graduated from Villa Maria Academy in Green Tree, Pennsylvania, in 1952. Following high school graduation, she attended St. Joseph College in Emmitsburg, Maryland, where she earned her Bachelor of Arts Degree in English in 1956. In April 1957, she entered the Daughters of Charity in Emmitsburg.

Following initial formation, Sister Margaret John taught at St. Christine School in Youngstown, Ohio (1958- 1961). She then taught at Elizabeth Seton High School in Bladensburg, Maryland (1961-1964). From 1964-1967, Sister Margaret John lived at DePaul House of Studies and studied at St. John’s University in Jamaica, where she earned a Master of Arts Degree in English in 1964 and a Doctor of Philosophy Degree in English in 1967. Following this, she served as a professor at St. Joseph College, Emmitsburg (1967-1973) and as president at Catherine Labouré Junior College in Boston, Mass. (1973-1980). She then served as vice president of Mission Services at the Catholic Health Association Office in St. Louis (1980- 1984). She served the Sisters of the Northeast Province in Albany, New York, as Councillor (1984-1987) and as Visitatrix (1987-1993).

A Mass of Christian Burial took place on Dec. 3, at the Basilica of the Shrine of St. Elizabeth Ann Seton, with burial in St. Joseph Cemetery on the grounds.